It is "ludicrous to think that our business development plans in Israel are in any way the result of political pressure," he said at the time. 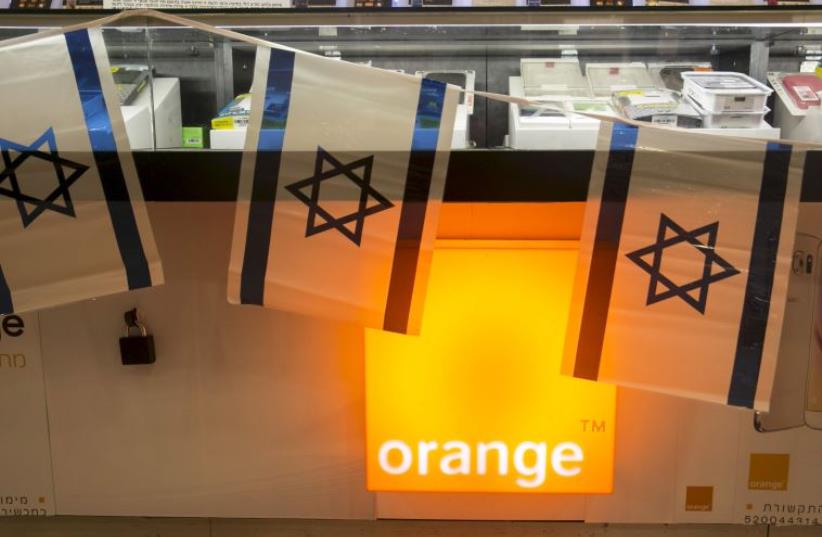 Israeli flags hang over the counter for the Orange mobile company at a mall in Tel Aviv
(photo credit: REUTERS)
Advertisement
Cellphone provider Partner, which has been known by the licensed brand name Orange for 17 years, debuted a new sea-foam green logo and brand on Tuesday following a BDS flap with France-based Orange SA last year.“This is a special day for the Partner Group, which is embarking on a fascinating journey with our new brand, a journey in which our goal is to evolve into the most interesting and successful communications group in the State of Israel,” said Partner Chairman Adam Chesnoff.In June, Orange CEO Stephane Richard reportedly told a crowd in Cairo that, if possible, he would cut ties with Israel, despite having recently signed another 10-year contract extending the brand licensing to Partner. In the firestorm that followed, Richard came to Israel, met with Prime Minister Benjamin Netanyahu and declared his “love” for the Jewish state, while citing Orange’s hi-tech ties in the country, including a subsidiary and accelerator, and saying there were no plans to cut off relations.It is “ludicrous to think that our business development plans in Israel are in any way the result of political pressure,” he said at the time.His company, he added, was simply ready to end its brand-licensing agreements.Partner went on to conduct a study on the harm the incident caused its brand locally, and ultimately agreed to a deal ending the licensing agreement with Orange, which included a €90 million payoff for Partner.On Tuesday, Partner debuted its new logo and communications strategy, saying it planned to grow from a cellular company into a full-on “digital communications group.”In that vein, it debuted a home Internet product based on its 4G network, a family data-sharing plan, and an addition of 2GB of Internet surfing on its current unlimited cellular plans.“Once we put the storm of last summer behind us, we held a series of strategic planning discussions that resulted in our decision to part from the Orange brand and to embark on a new road,” said Partner CEO Isaac Benbenisti.Haim Saban, one of the company’s owners, said the name Partner, selected long before the world had gone digital, turned out to be a fitting one for the digital communications era.“We are invested in Partner and, from what I see, there is, in my opinion, a great opportunity to develop partner into a communications company on the international level,” Saban said, according to TheMarker.The new logo, with its blue-green background and black letters, features lines extending from the P and T to the top and left of the panel.“The brand language is based on values of movement, simplicity and flexibility – as we need to be in our relationships with customers,” said Atara Litvak-Shacham, Partner’s vice president marketing and growth engines.According to Globes, the rebranding will begin on billboards with 3,000 ads countrywide, and eventually include television, radio and other forms of media.