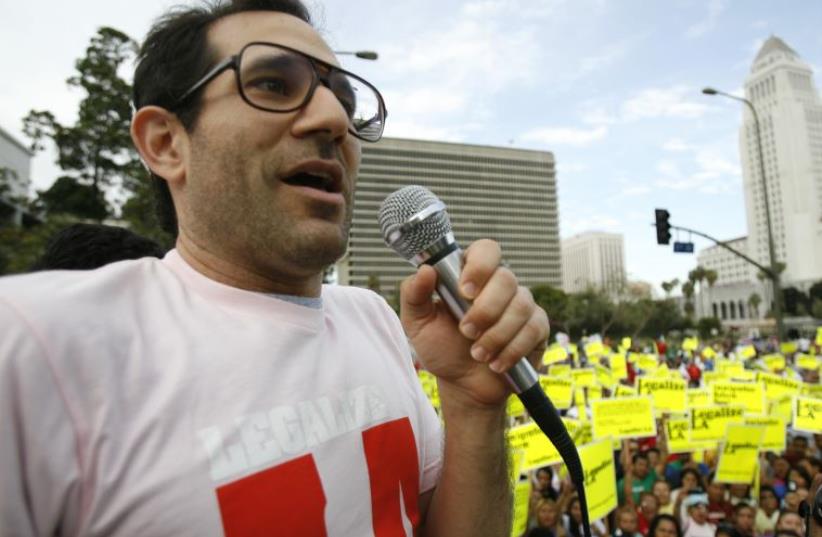 American Apparel owner Dov Charney speaks during a May Day rally protest march for immigrant rights, in downtown Los Angeles May 1, 2009.
(photo credit: REUTERS)
Advertisement
American Apparel Inc founder and former Chief Executive Dov Charney said he was exploring plans with potential and existing investors and industry executives to revive the bankrupt company.Charney, who founded the teen apparel retailer in 1989, said on Friday he had hired Cardinal Advisors LLC to advise it on the process."We can confirm that there is currently no transaction for the board to consider, and that Mr. Charney has submitted nothing more than an indication of interest," an American Apparel spokesperson said in an email.Sources close to the matter told Reuters that Charney was yet to execute a non-disclosure agreement with the company.The company, known for its racy advertising and its controversial founder, filed for Chapter 11 bankruptcy protection in October.The retailer, which had about 9,000 employees and 227 stores as of Sept. 30, had said that its operations would continue under a deal with its most secured lenders.Charney lost 42 percent stake in American Apparel, held as collateral by New York hedge fund Standard General LP, along with the holdings of other shareholders.He was ousted as CEO in June 2014 for alleged misconduct, including misusing company funds and failing to stop a subordinate from creating blog posts defaming former employees.