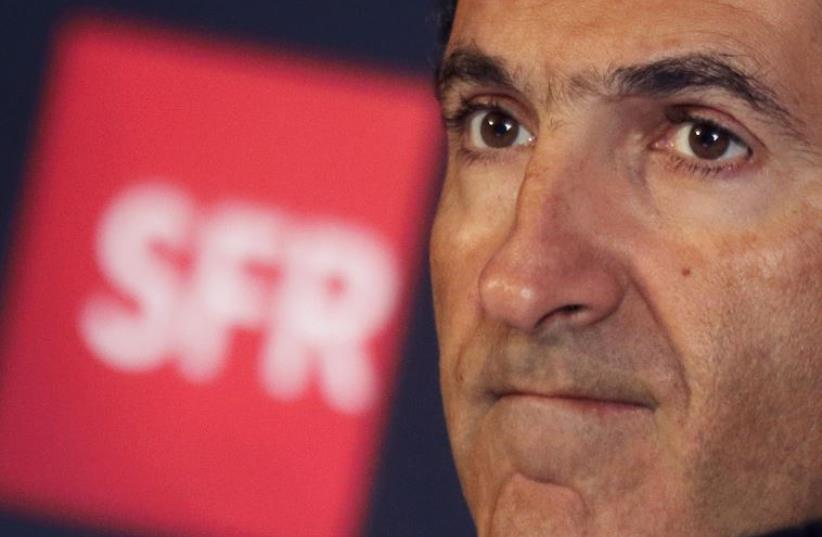 Patrick Drahi, Franco-Israeli businessman, attends a news conference in Paris
(photo credit: REUTERS)
Advertisement
Patrick Drahi, the French-Israeli billionaire and one of the wealthiest businessmen on the planet, is on the verge of adding to his empire by acquiring Cablevision, one of the United States' largest cable television providers.Cablevision Systems Corp has agreed to a $17.7 billion takeover offer by European telecommunications company Altice, which is controlled by Drahi, according to two people familiar with the matter, the latest acquisitions in a sector struggling with declining viewership.Shares of Cablevision, which is controlled by New York's Dolan family, jumped as much as 16 percent to $33.12 after the bell as details of the takeover deal, which includes Cablevision's debt, became public. The New York Times had earlier reported on the deal.The sources said Altice will pay $34.90 per share for Cablevision and will finance the deal through banks and by selling additional shares.As part of the deal, BC Partners and the Canada Pension Plan Investment Board, the minority stake holders of Suddenlink [CQUELS.UL], may buy 30 percent of Cablevision’s equity, the sources added.The sources declined to be identified as the matter remained confidential. Altice and Cablevision could not be immediately reached for comment.Cablevision, which operates primarily in the Greater New York area, was valued at $7.89 billion as of Wednesday's close based on its outstanding shares as of July 31. Its debt levels were not immediately known.Altice Group is a multinational cable and telecommunications company which has said it was keen to acquire more US cable TV firms. The Cablevision takeover is its second this year.In May, it agreed to buy Suddenlink, the seventh largest US cable company, for $9.1 billion from private equity investors, its first move across the Atlantic.US cable companies are struggling with declining subscriber numbers, with viewers shifting to cheaper and more flexible streaming services offered by the likes of Netflix Inc, Amazon.com Inc and Hulu, triggering a wave of acquisitions in the sector this year.AT&T Inc became the largest US pay-TV company in July after it completed its $48.5 billion merger with the biggest satellite-TV provider DirecTV.