Gett Israel and Google Maps link up: A sign of things to come?

Down the line, Google could rely on its close relationships with companies like Gett as it figures out how to best utilize the autonomous vehicle technology. 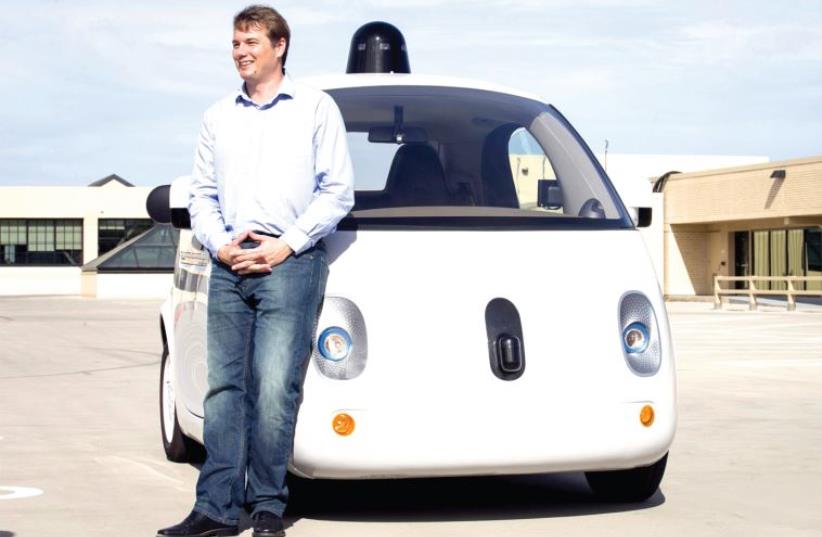 Chris Urmson, director of Google’s Self-Driving Cars Project, seen at a demonstration of a prototype self-driving car in Mountain View, California, September 29
(photo credit: ELIJAH NOUVELAGE / REUTERS)
Advertisement
Israel’s cab-hailing app Gett (formerly Get Taxi) and tech giant Google expanded a collaboration this week that could be the opening volley in the battle to dominate the mobile transport market.In the deal, Google will offer information and a link to Gett in its popular Maps app when users search for directions, including an estimated fare and travel time. The feature, which previously went live in the UK and as of Wednesday is available in Israel and Russia, lets users seamlessly jump from Maps to Gett to order their cabs, or directs them to the app store to download the app. Google has offered the same feature with Uber for some time (though not in Israel, where Uber’s ride-sharing feature UberX is not legal).Since March it has announced a number of collaborations around the globe to bolster competing services, including GO-JEK in Indonesia, Grab in Southeast Asia, and Hailo and MyTaxi in countries such as Ireland, Poland, Italy and Austria.In a Sunday blog post announcing the most recent expansions, Google described the feature as “a dedicated mode where users can easily compare ride service options without having to open multiple apps.”For companies such as Gett, which are trying to go headto- head with the behemoth of Uber, the opportunity to have their services offered side by side in the ubiquitous Maps app is a boon, assuming they can offer their services more quickly and cheaply.“The collaboration with Google Maps is another way in which Gett expands its customers’ accessibility to travel by taxi – through various channels and at any time. We will keep on working with Google Maps in order to continue to improve the user’s experience – from ordering a cab to the ride itself,” CEO of Gett Israel Mark Oun said in a statement Wednesday.In February, The Jerusalem Post reported that Gett was working on building a “coalition” with other local cab-hailing and ride-sharing services, such as GrabTaxi, India’s Ola and China’s Didi, in order to compete against the very global Uber. The strategy was to make the apps cross-compatible, so that a Chinese tourist visiting Israel could summon a Gett, for example, through the Didi app she was used to using.While the new Maps feature is helpful to Google users, the collaborations may also offer clues as to Google’s strategic ambitions in the automotive field. Google’s parent company Alphabet is working on a driverless car, as is Uber and companies such as Tesla, though it’s not yet clear exactly what business models any of them will employ.A company like Uber might simply offer driverless taxis from its own fleet on demand, while Tesla CEO Elon Musk recently spoke of a model by which people would own driverless cars, then earn extra cash by letting the autonomous vehicle give other people lifts instead of sitting in a garage or parking lot all day.For Google, however, the path for introducing its driverless technology is less straightforward.“You can only guess depending on what kind of player Google is going to be in autonomous cars,” said Yonatan Machado, a partner at JVP.Down the line, he said, Google could rely on its close relationships with companies like Gett as it figures out how to best utilize the autonomous vehicle technology.“I could see them one day acquiring one of the players and offering their own competition.But it could fit into their global strategy in many ways, and betting on how is a stretch,” Machado said.“Uber happens to be the twoton gorilla here that can go for the entire value chain,” he added.Apple, which has a not-sosecret interest in the car market, recently made a $1 billion investment in Didi. Didi itself managed to best Uber’s China operations, which it acquired this month.But as the tech giants set the stage for tomorrow’s driverless technology, today’s fight is for market share between ride-hailing apps, and Google just gave Gett a considerable leg up.“For Gett it’s crucial, because if, in every market they’re in, people open Google and only see Uber, that’s a problem,” he said. “Google Maps is the first chance to really compare them,” he added.