President and CEO of Development Corporation for Israel explains the value of investing in Israel’s economy. 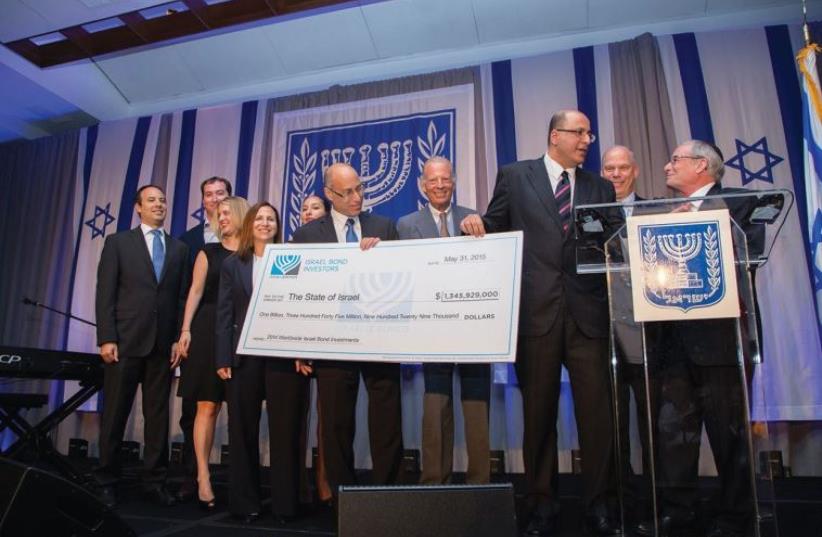 Israel Bonds CEO Izzy Tapoohi (right) presents a symbolic check to Consul General in New York Ido Aharoni representing over $1.3 billion in 2014 worldwide Israel Bond sales
(photo credit: ISRAEL BONDS)
Advertisement
Whether the global economic mood is sunny or stormy, whether stocks are running with the bulls or hibernating with the bears, it is Izzy Tapoohi’s job to convince investors to put their money in Israel.The Australian-born Tapoohi heads Israel Bonds, the brokerage firm that sells Israeli government debt. Like all governments, Israel needs to raise money when its budgetary spending outweighs its revenues. The question is, how much of a premium do they have to pay to borrowers, who need to be convinced that Israel Bonds offer them a better return with less risk of losing their investment? The way investors answer that question can make a big difference for Israel when it comes time to pay up; the amount Israel spends on paying its debt interest alone every year adds up to as much as two-thirds of the defense budget.Under Tapoohi’s lead, annual US domestic sales at Israel Bonds have risen from $600 million to $1.1 billion, and despite the difficult global economic circumstances and tough challenges Israel faces at home, he is optimistic about continued growth.Speaking to The Jerusalem Post from his New York offices, Tapoohi gives his take on BDS, the slowdown in China, and explains why despite it all, he remains bullish on Israel.