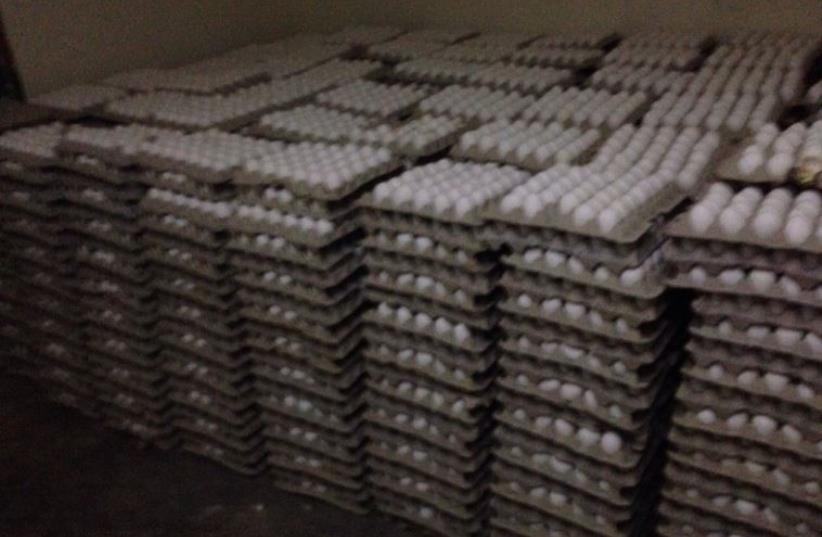 Seized eggs from West Bank
(photo credit: POLICE SPOKESPERSON'S UNIT)
Advertisement
Your morning omelet and latte could soon become cheaper, after the Finance and Agriculture ministries sign a directive in the coming days that will lower the price of eggs and dairy products across the country.Dairy and eggs are items under government price controls and are often seen as an indicator of the overall cost of living, especially after the massive 2011 social protests which were sparked by outrage over the high price of cottage cheese.Once the directive is signed by Agriculture Minister Uri Ariel and Finance Minister Moshe Kahlon, the cost of a number of dairy products will go down by 3.02 percent. A liter of the bagged variety of 3% fat milk will cost NIS 5, while the 1% variety will cost NIS 4.65. Milk in cartons will cost an additional 0.75 agorot.For NIS 3.80, consumers will be able to buy 100 grams of butter. Hard yellow cheese will cost NIS 41.30 per kilogram, while soft, labane cheese will cost NIS 18.40 for the same amount.Eggs are set to see a larger, 4.62% reduction. A carton of 12 medium eggs will soon cost NIS 10.55, with NIS 11.45 for large eggs and NIS 12.50 for the extra-large variety.These reductions come on top of earlier reductions. In July 2015, dairy prices went down by 4.65%, while in January 2015, the price of eggs was lowered by 3.1%.An Agriculture Ministry representative told The Jerusalem Post that the trimmed prices are the result of lower production costs at dairies and chicken coops across the country, which was partly due to the cost of animal feed becoming cheaper.Ariel said the initiative was part of his ministry’s goal for lowering the cost of living. He said the Agriculture Ministry is in the process of working with the Finance Ministry to add other products, such as fruits and vegetables, to the price-controlled basket.Ariel said, “This is an important move because it will pertain to all Israelis, especially the weaker segments of society.”