Greeks head out to vote on bailout referendum Sunday

Greeks are split on whether to accept an offer by creditors that Greek PM Alexis Tsipras calls a "humiliation." 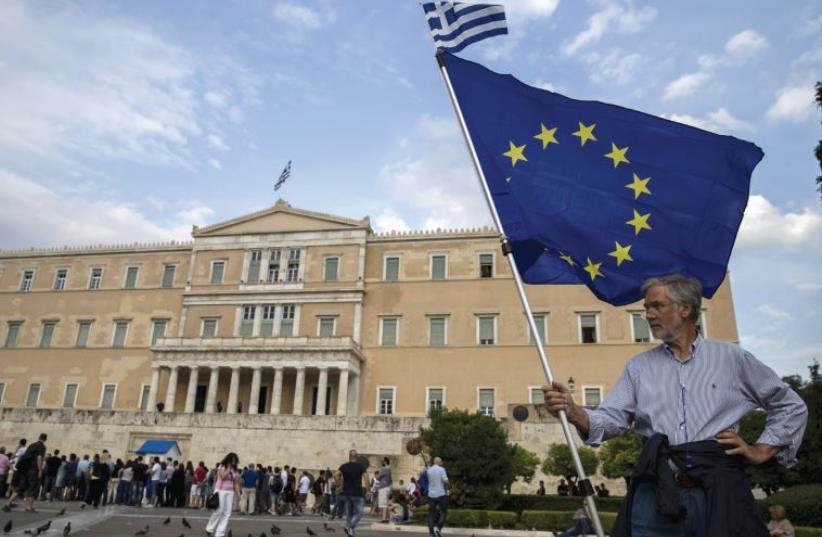 A pro-euro protester holds a European Union flag with a Greek national flag on top during a rally in front of the parliament building in Athens
(photo credit: REUTERS)
Advertisement
ATHENS - Greece votes on Sunday on whether to accept more austerity in exchange for international aid, in a high-stakes referendum likely to determine whether it leaves the euro-currency area after seven years of economic pain.Staged against a backdrop of shuttered banks and threats of financial apocalypse, the vote is too close to call and may not produce the clear mandate for negotiations that Athens' creditors seek.Greeks are split on whether to accept an offer by creditors that Prime Minister Alexis Tsipras calls a "humiliation" and is urging people to reject. Investors and European policymakers say a rejection would set Greece on a path out of the euro, destabilizing the global economy and financial markets."On Sunday we should all send a message of democracy and dignity to the world," Tsipras told tens of thousands of Greeks rallying for a 'no' vote before campaigning ended.Voting on whether to accept more taxes and pension cuts would be divisive in any nation, even at the best of times.In Greece, the choice is faced by an angry and exhausted population who, after five years of crippling austerity, have now suffered through a week of capital controls imposed to prevent the collapse of the nation's financial system.Pensioners besieging bank gates to claim their retirement benefits, only to leave empty-handed and in tears, have become a symbol of the nation's dramatic fall over the past decade.Eleven years ago, in the early morning of July 5, 2004, Greeks poured into the streets, united in celebration of their country's victory in the European Cup soccer tournament. Today, Greece is divided -- and scared -- as rarely before."There is an atmosphere of fear. You can just feel it," said Sarafianos Giorgos, a 60-year-old teacher in Athens, who says he will vote in favour of the creditors' proposals.Polls open at 7 a.m. local (0400 GMT) and shut at 7 p.m, with the first official projection of the result expected at 9 p.m.Four opinion polls published on Friday showed the 'Yes' vote marginally ahead. A fifth put the 'No' camp 0.5 percentage points in front. All were well within the margin of error.Anxious Greeks rallying for a 'Yes' vote agree Greece has been handed a raw deal but say the alternative, a collapse of the banks and a return of the old drachma currency, would be worse.Those pledging to deliver a rousing 'No' to tax hikes and pension cuts in return for more loans say Greece cannot afford more of the austerity that has left one in four without a job. They agree with Tsipras that Europe is "blackmailing" Greece."As a Greek woman, I am embarrassed at those who are going to vote 'Yes' for fear of leaving the euro. They are asking us to accept unending slavery. I am offended," said Tenekidou Ermioni, a 54-year-old teacher.ime.