How Israel's Mobileye is driving in cash on autonomous vehicle tech

The Israeli company also believes its mapping technology will be cheaper and more comprehensive than rival systems because of the way it is created. 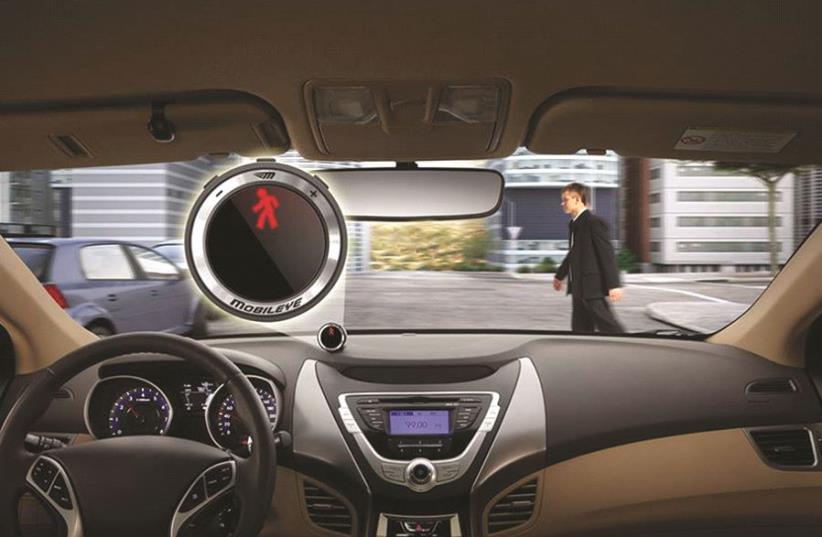 A vehicle equipped with Mobileye technology
(photo credit: COURTESY MOBILEYE)
Advertisement
Mobileye's mapping program for self-driving cars will start making money long before fully autonomous vehicles hit the roads, its chairman told Reuters, as carmakers can use the technology for a variety of semi-autonomous driving features.
Intel buying Israeli driverless car-tech firm Mobileye for $15 b. (credit: REUTERS)
Amnon Shashua, head of the Israeli technology company that is being bought by Intel Corp for $15.3 billion, said Mobileye expected to announce deals with carmakers by the end of 2017 for its high definition (HD) maps, bringing in revenues for both the company and its map-making partners.Fully self-driving vehicles are not expected until at least 2021, but carmakers are already offering a variety of semi-autonomous driver assistance systems, such as Tesla's Autopilot system. Mobileye thinks its mapping technology will be needed as these systems become more advanced. "We can enable hands-free driving to levels that are much higher than with any sensor (alone)," Shashua told Reuters, adding semi-autonomous systems still required drivers to remain alert.The Israeli company also believes its mapping technology will be cheaper and more comprehensive than rival systems because of the way it is created.Whereas traditional HD mapping requires dedicated vehicles with specialized equipment and hired drivers, Mobileye's RoadBook uses hardware in vehicles to "crowdsource" data.Nissan, Volkswagen (VOWG_p.DE) and BMW have already signed up to share data from Mobileye's camera-equipped advanced driver assistance systems to generate HD maps for self-driving cars, and Shashua said four more manufacturers were in talks about joining the program."We hope to have the majority of these four signed by the end of 2017," he said. "Only car manufacturers can contribute ... because they have the cars. This is something that truly separates the car industry from the tech players."The prospect of self-driving vehicles has attracted Silicon Valley giants Google and Apple as well as carmakers, with Goldman Sachs estimating the market for advanced driver assistance systems and autonomous vehicles could grow to $96 billion in 2025 from just $3 billion in 2015. Based on discussions with automaker and map-maker partners, Mobileye believes revenues from its HD maps will be "quite meaningful," though Shashua said he could not quantify it yet.Once autonomous driving cars are ready, there will be a period of several years where drivers will still be needed for monitoring purposes, Shashua added."If the expectation is for zero accidents that isn't realistic," he said. He believes society would accept fatalities that are 2-3 orders of magnitude smaller than with people-driven cars, meaning a decline to as few as 35 fatalities annually in the United States from around 35,000 today.