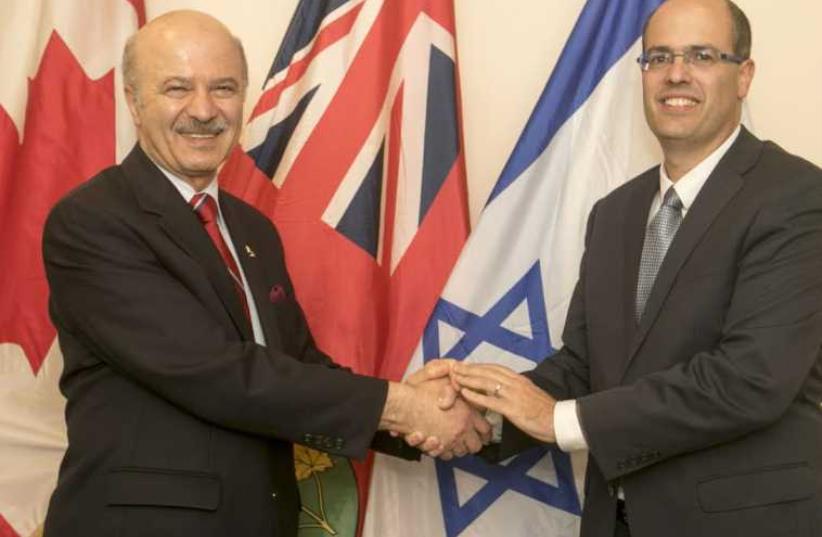 Ontario’s Minister of Research and Innovation Reza Moridi, Left, shakes hands with Chief Scientist Avi Hasson.
(photo credit: YOSSI ALONI)
Advertisement
The Chief Scientist’s Office in the Economy Ministry and Ontario’s Minister of Research and Innovation Reza Moridi extended a 10-year strong Ontario-Israel Collaboration Program for another five years on Sun - day, bringing the cumulative value of the program to $18 million, of which each side contributed half.The investment is worth it, Moridi told The Jerusalem Post , estimating that the companies that have come out of the joint R&D program have gone on to raise $1 billion in revenue.According to Moridi, an Iranian-born nuclear scientist who moved to Canada in 1987, Israel and Ontario have a particularly strong relationship in the fields of life sciences, medical devices, cleantech and telecoms/ICT.For example, the initiative has led to a partnership with Canada’s Quanser and Israel’s Simbionix to produce a tool that simulates laparoscopic surgery, which better trains doctors for delicate operations. Other joint projects have led to innovations in power savings for commercial power users, water monitoring with ultraviolet light and an ADD diagnostic tool and therapy.Although Ontario and Toronto may not have the brand recognition of the start-up nation or Silicon Valley, Moridi said it is a leader in many unexpected fields.In all of North America, Ontario is home to the second-largest number of ICT companies, and of the 60 states and provinces in the US and Canada, it ranks No. 7 in R&D. After New York and Los Angeles, Toronto is the third-largest urban area between the two countries and is a financial capital just behind New York and Chicago.A leader at Y Combinator, a renowned incubator in Silicon Valley, told The New York Times that graduates of Ontario’s University of Waterloo sent the best ideas his way. About 65 percent of Ontarians have a post secondary education, significantly higher than the 45% in Israel.“There’s huge human talent potential in Ontario in every area,” Moridi said.Hasson agreed.“The Ontario-Israel Collaboration Program [OICP] leads the way for bilateral technology cooperation between Ontario and Israel,” he said. “The OICP is a highly effective gateway that enables the Chief Scientist’s Office to connect with ideal technology partners across Ontario and facilitate cooperative R&D that benefits both jurisdictions.”