"A free trade agreement between Israel and South Korea will be a significant milestone in trade relations between the two countries and carry significant economic potential for them." 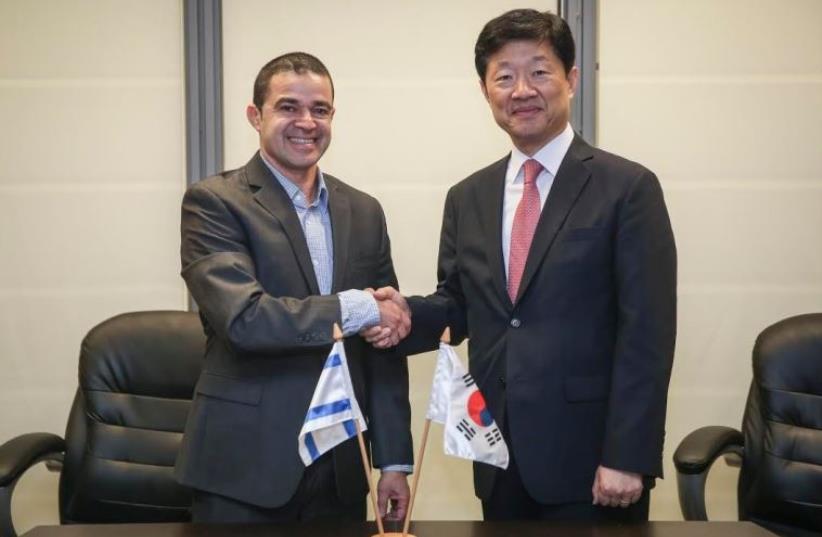 Mr. Tae Hee Woo and Amit Lang
(photo credit: HADAS PARUSH/FLASH90)
Advertisement
Israel and South Korea on Tuesday announced the opening of free-trade talks, to commence in two months in Seoul.In a meeting between Economy Ministry director-general Amit Lang and South Korean Deputy Trade Minister Woo Tae-hee, the two discussed ways to increase trade specifically in the fields of hi-tech, agriculture and industrial research and development, among others.“A free-trade agreement between Israel and South Korea will be a significant milestone in trade relations between the two countries and carry significant economic potential for them, as well as economic relations between Israel and Asian countries in general,” Lang said.In 2015, Israel and South Korean trade stood at $1.7 billion, including $578 million in Israeli exports to Korea.The announcement comes just two months after Israel and China free trade talks, and three months after Israel and Vietnam kicked off their own free trade negotiations. Japan has also recently featured prominently in Israel’s trade strategy, as the two signed an industrial R&D cooperation agreement in 2014.In their meetings, the sides said an agreement should strive to remove most tariff and other non-tariff barriers to trade, covering goods, services, investment and other forms of economic cooperation.On a regional level, Asia now rivals the United States as Israel’s second-largest trade partner, though both regions still trail Europe.