The new joint center will promote academic cooperation in research and teaching and will serve as a platform to encourage connections between Chinese and Israeli business people. 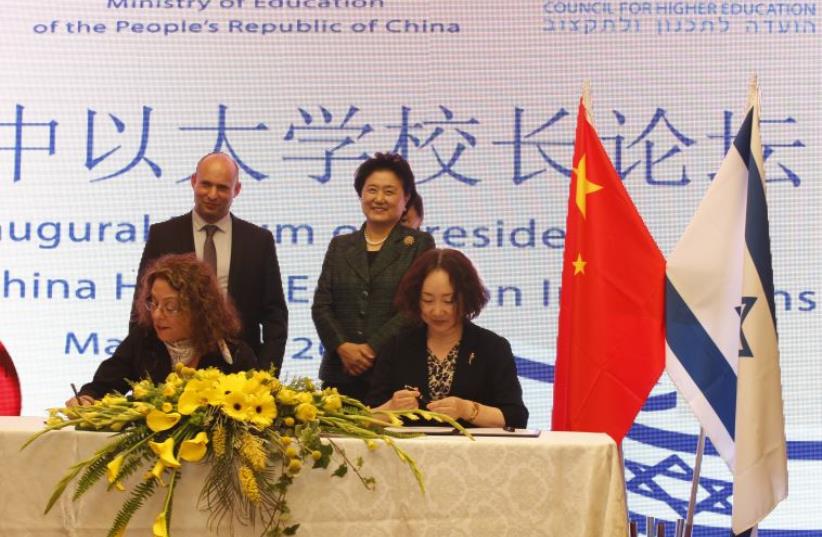 BGU President Prof. Rivka Carmi and JLU Executive Vice Chairman of the University Council Prof. Li Cai sign an agreement to establish a joint innovation center‏
(photo credit: COUNCIL FOR HIGHER EDUCATION)
Advertisement
Ben-Gurion University of the Negev and Jilin University (JLU), the biggest university in China, signed an agreement this week to establish a joint center for entrepreneurship and innovation.Prof. Rivka Carmi, BGU’s president, and Prof. Li Cai, executive vice chairman of JLU’s University Council, signed the agreement in Jerusalem in the presence of Chinese Vice Premier Liu Yandong and Education Minister Naftali Bennett at the Forum of Presidents of Israel-China Higher Education Institutions, a new initiative of the Council for Higher Education.“This agreement is another stage in the internationalization of BGU and exemplifies the university’s commitment to academic excellence, international ties, and economic growth,” Carmi said of the initiative.The new center will promote academic cooperation in research and teaching, and will serve as a platform to encourage connections between Chinese and Israeli business people.The agreement emerged through the cooperation of the two universities’ innovation centers: the Bengis Center for Entrepreneurship and Innovation in the Guilford Glazer Faculty of Business and Management at BGU, and the China-Israel Center for Entrepreneurship and Innovation in the Faculty of Economics at JLU. The two bodies will lead the activities of the new center.“The agreement is a symbol of a new stage of productive and innovative collaborations based on our China-Israel Center for Entrepreneurship and Innovation,” Cai said during her visit to BGU this week.JLU is situated in Changchun, in northeastern China, and is one of the country’s “top 10” universities. It has approximately 67,000 students.The first action of the new joint center will be the launch of a global entrepreneurship and innovation conference to be held May 16 at BGU.The theme of the conference will be “Entrepreneurship and Innovation, China-Israel – Challenges and Opportunities.” Israeli Nobel laureate Prof. Dan Shechtman; Laiwu Zhang, chairman of the China Soft Science Research Council and a former minister of science and technology; and Avi Hasson, chief scientist of the Economy Ministry, will provide keynote addresses.