“The Chinese interest in the Israeli startup scene is undeniable yet it is not easy for Israeli companies to break into the Chinese market..." Hila Rosenfeld said. 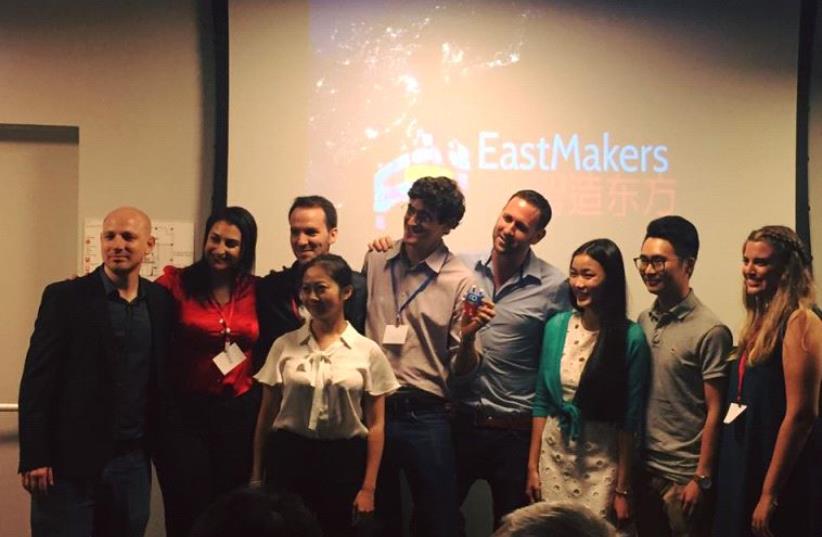 Israeli-Chinese hardware incubator launches in Tel Aviv
(photo credit: PR)
Advertisement
The EastMakers Program, a new incubator focusing on the Internet of Things and hardware, launched Monday night in Tel Aviv at and event at the Google Campus.The program is a collaboration between StartupEast, a three-year old incubator that helps Israeli companies expand into Asian markets, and MakeMountain, a Shenzen-based incubator that helps companies in the field of manufacturing.It is the first such program focused on IOT and Hardware.“The  Chinese interest in the Israeli startup scene is undeniable yet it is not easy for Israeli companies to break into the Chinese market without a local partner," said Hila Rosenfeld, StartupEast’s Business Development Manager.The joint venture will choose three start-ups for its first round, which will receive pre-seed investment and free services equivalent to $100,000, a one-month preparation program, and an incubation period in Shenzen to help them get their China operations up and running.Yu Bao, the CEO of Greenlab Shenzhen and the main investor in the venture, said that Israeli companies need a lot of help in navigating the complex Chinese market."Understanding it is difficult. Even the people who grew up there need ten years to understand the system," he said.For example, he said, it's not uncommon for Israelis, who are used to dealing with American and European business culture, to direct their attention to the wrong members of a company."In China, visiting Israelis will try to meet the top people from each company. But in China that’s not necessary. The number one in the Chinese company don’t know all the details of the company. He’s like an empreror, ruling from the top. So you can’t make a deal," he said."Also, you can’t do it right away. You need need to wait maybe six months," he added.At Monday's event, a handful of enterprising start-ups presented their wares with the hopes of getting picked for the incubator.Wekast, for example, invented a plug-and-play device that would make it easy to give big-screen presentations from one's smartphone. Another, Magnivation, proposed 3-D printing smart toys that kids could use as add-ons to mobile games. A third, Aleph1, created a new kind of speaker that reduces a common kind of distortion.Israel has increasingly been focusing its attention on China, the world's second-largest economy. The two countries are in the midst of free trade talks, which would boost investment and trade by lowering barriers.
Yu, who has been visiting Israel regularly looking for investment opportunities since 2009, said that he has strong faith in Israel's capacity for innovation. The first company he met with on his 2009 trip was called Mobileye. The second was called Waze.“I think the most important thing is the combination of knowledge between Israel and China. That hasn’t happened yet. The money part is easy,” Yu said.