While Cofix has 152 branches in Israel, there are set to be 300 Cofix's in Moscow alone, with up to 1,000 spreading around the country. 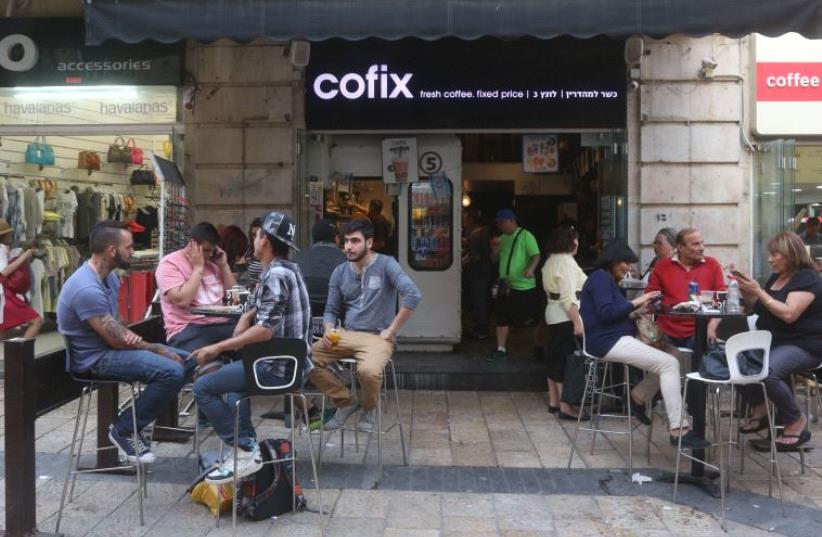 Cofix on Ben Yehuda Street in Jerusalem
(photo credit: MARC ISRAEL SELLEM)
Advertisement
Coffee drinkers in Moscow can now enjoy their favorite beverage for an affordable price. The chain Cofix, popular in Israel for its menu featuring a fixed price of NIS 5, has opened the first of it's planned 1,000 Russian branches, according to The Marker. The Moscow branch features a fixed price of 50 rubles for all menu times. When comparing the countries it evens out to be about NIS 3 cheaper than the Israeli stores.The price is drastically cheaper than competitors such as Starbucks, who according to Bloomberg News, charges 245 rubles for a cappuccino. The founder Avi Katz, who was in Moscow, explained, "In Russia, it costs 20 rubles to make a cup of coffee at home, while most coffee shops are offering it at about 200 rubles: this is probably the widest difference in the world"Cofix has adapted their menu to the Russian audience adding fresh carrot juice, blintzes, and a variety of tea.  Two more branches were expected to open in Moscow in the next month, with the first one opening in Red Square. There are set to be 300 Cofix's in Moscow alone, with up to 1,000 spreading across the country. Cofix has 152 branches in Israel.The agreement, which was announced in May was a joint initiative with a private company, according to Globes. Katz also stated that the UK may be Cofix's next market.