Amos 6 was insured for $330 million, which will cover repayment of bonds, but the Israeli company's share price looks vulnerable. 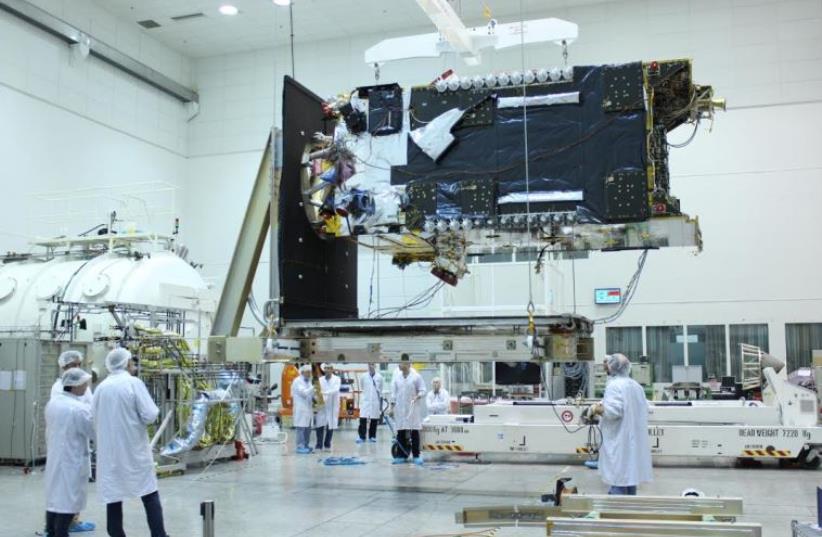 AMOS-6 satellite.
(photo credit: SPACECOM)
Advertisement
The Amos 6 satellite, which was destroyed in Thursday's explosion in Florida of Elon Musk's SpaceX Falcon 9 rocket, was insured by Israeli company Spacecom Satellite Communications for an overall value of $330 million. The satellite was recorded in the company's books as costing $244 million, which can now be deducted from the company's assets.This leaves Spacecom with three operational communications satellites. Amos 2, which is nearing the end of its life span, Amos 3 and Amos 4. Amos 6 was part of a new generation of the company's satellites and among other things was supposed to provide services for Amos 2 customers when it went out of service.
Explosion at Cape Canaveral
Two big deals signed by Amos 6 would have brought Spacecom $100 million from Facebook for connecting parts of Africa to the Internet and $164 million from the Israeli government.To fund Amos 6, Spacecom had issued bonds worth NIS 1 billion (about half of its total debt). The insurance payments will cover this debt but the company will lack revenue streams to cover ongoing expenses and there are serious concerns that the company's share price will plunge, threatening shareholder's investment. The share price already fell 8.8% in late trading yesterday.Amos 6, built by Israel Aerospace Industries, is by far the most advanced made-in-Israel satellite. Construction of the satellite was completed several years ago and it was sent to the US to be integrated into the SpaceX launcher rocket.The loss of Amos 6 comes just as the company seemed to be recovering from last year's disaster with Amos 5, which went off course in space. On top of everything else the $285 million sale of Spacecom to China's Beijing Xinwei, agreed just two weeks ago, and which was dependent on the successful launch of Amos 6, now looks likely to be cancelled.