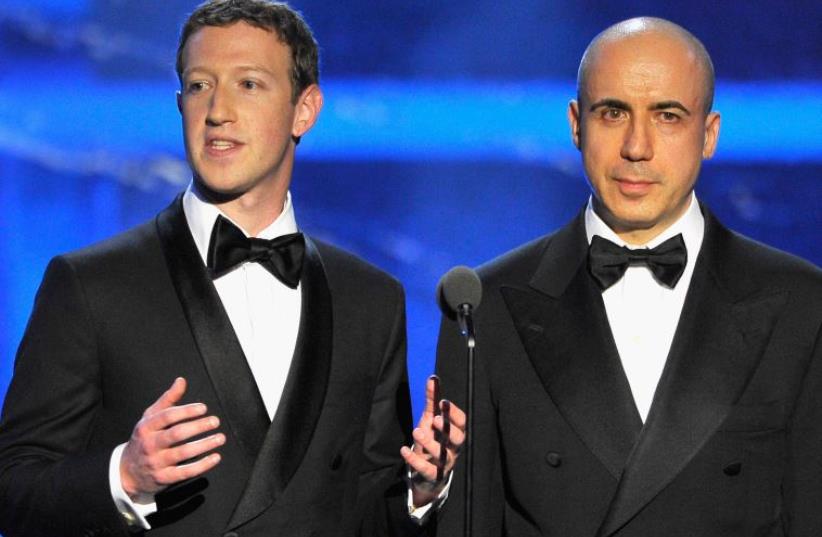 Mark Zuckerberg (L) and Yuri Milner speak onstage during the 2016 Breakthrough Prize Ceremony on November 8, 2015 in Mountain View, California
(photo credit: STEVE JENNINGS/GETTY IMAGES FOR BREAKTHROUGH PRIZE)
Advertisement
MOUNTAIN VIEW, CALIF.- Academia just turned a little more glitzy for a select group of scientists.Jewish-Russian billionaire Yuri Milner handed out $21 million Sunday in seven Breakthrough Prizes, the award for scientific accomplishment he created three years ago alongside technology giants including Facebook founder Mark Zuckerberg, 23andme founder Anne Wojcicki and Google co-founder Sergey Brin. The prizes are worth $3 million, around three times the sum a Nobel Prize winner receives.For one group of Breakthrough recipients, the honor will carry more prestige than cash. Some 1,370 physicians are being honored as part of a single $3 million prize for their work confirming the theory of neutrino oscillation, a phenomenon in quantum mechanics.Seven team leaders will split two-thirds of the prize. That leaves $1 million to split among the others, or around $700 to each physicist."I would love to give $3 million to each one, but we're not there yet," Milner said in an interview on Friday. Increasingly, he added, breakthroughs are made through vast consortiums rather than a handful of scientists working in relative isolation, raising the chances of such shared prizes in future.Five prizes went to researchers in life sciences for advances in areas ranging from optogenetics to sequencing of ancient genomes. A prize in mathematics went to a professor at the University of California, Berkeley, for work in low dimensional topology and geometric group theory.Eight scientists early in their mathematics and physics careers won awards of $100,000.Milner has set his sights on giving the sciences the same cultural resonance as sports or entertainment, but on Friday, he said it was too early to see if his work was having any effect. He pointed to the ceremony's broadcast on a major US network, Fox, for the first time as a sign things were moving in the right direction.A onetime physics PhD student in Moscow who dropped out to move to the United States in 1990, Milner has backed some of the world's biggest technology companies, including Facebook.Seth MacFarlane, creator of the hit TV series "Family Guy," hosted the black-tie ceremony, held at the NASA Ames Research Center in Mountain View, Calif.Hollywood celebrities like pop star Christina Aguilera hobnobbed with Silicon Valley celebrities like Theranos chief Elizabeth Holmes, whose blood-testing company has come under fire in recent weeks. News Corp. O> chief executive Rupert Murdoch sat next to Gen. David Petraeus.Singer Pharrell Williams serenaded the audience before dinner, created by chef Thomas Keller. Other celebrities milling about included actress Hilary Swank and cast members of the TV show "Silicon Valley."Earlier this year, Milner said he would spend $100 million looking for intelligent life in space by searching for radio and light signals.