Last year, eight startups were picked to join the accelerator program out of 224 startups that applied. 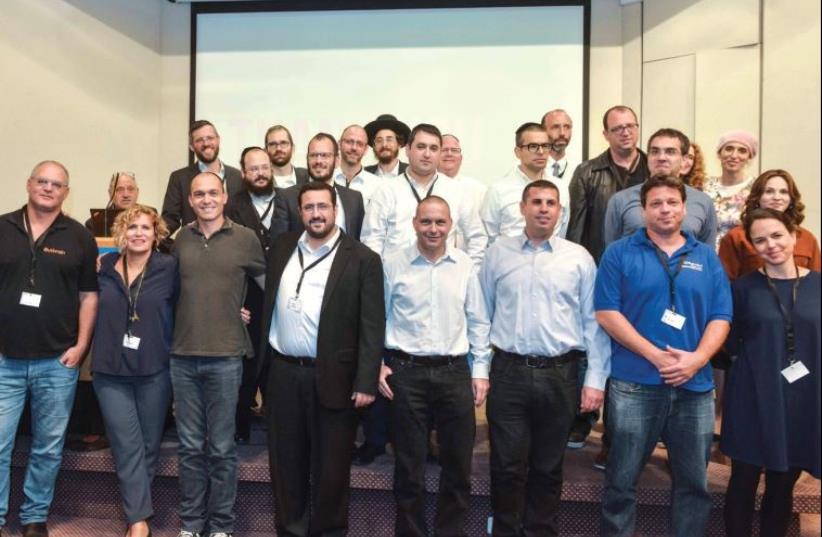 Participants in the KamaTech Accelerator’s 12Angels club
(photo credit: BENNY DOUTSH)
Advertisement
A31, the first leading assistive technology accelerator in Israel, is calling on entrepreneurs from the hi-tech and social-business world to participate in an innovative and revolutionary program that will change the quality of life for people with disabilities. Entrepreneurs who will be accepted to the accelerator will receive hands-on, one-on-one consulting services from the concept stage all the way through to the beta creation stage. Mentors and business consultants will guide them as they develop a pilot and begin to deploy their technology in the community.The accelerator is a collaboration between Beit Issie Shapiro, the Ruderman Family Foundation and the Jewish Federation of Los Angeles, and is also partnering with PresenTense, which aims to make entrepreneurship accessible to all and accelerate social impact in communities across the globe.Startups that have participated in the A31 accelerator program in the past have achieved great success, with one winning a monetary prize from Verizon, and another receiving a grant from the Office of the Chief Scientist (Israel) for a technological innovation in the field of disabilities. A number of incubators received grants from global funds that promote social impact businesses, and three more have already succeeded in recruiting seed investments.The A31 accelerator program is 12 weeks long, with two sessions per week. The meetings include professional seminars given by PresenTense volunteers, visits to Beit Issie Shapiro, and lab work at the new LightHouse startup hub in Ra’anana. One day a week is devoted to individual consulting with experts on a variety of topics, including legal issues, patents registration, applications to the Office of the Chief Scientist, website construction, market research, and sales and marketing.90min
90min, an Israeli startup that developed the world’s most popular soccer fan platform with more than 47 million unique monthly visitors, recently launched 12up, an online social-first, user-generated platform for American sports lovers. 12up, which is targeted at the millennial generation, harnesses citizen journalists and is hoping to appeal to advertisers as well.Sports lovers can devise their own articles, quizzes, slide shows, videos, listicles or just about any type of multimedia content and then share it with millions of other sports fanatics through 12up. All of this takes place without the need for professional journalists – everything is created by amateur sports fans in real time.Over the last four months, 12up has been carrying out a quiet launch, which has attracted more than four million users. Following this incredible growth, the company created a super brand called Minute Media, which encompasses 90min and 12up.In October of 2015, 90min, which was founded by Asaf Peled, Gili Beiman and Yuval Larom, raised $15 million, which brought the total amount of funding to $45 million. The current round of financing was led by major VC funds, such as Battery Ventures, Gemini Ventures, North Base Media, Dawn Capital and ProSieben. 90min has offices in London, Tel Aviv, Manilla and Singapore and has recently opened new offices in New York and Miami.KamaTech
KamaTech, an enterprise that runs an incubator to help haredi men and women gain entry into the world of hi-tech, recently announced the launching of 12Angels, an investment club, in which participating startups receive small seed investments of tens of thousands of dollars. The name 12Angels was picked in reference to the initial 12 investors who until now have invested $300,000.The KamaTech Accelerator operates under a groundbreaking model in which each haredi startup that is accepted to participate in the program receives consulting services and support for four months from a large, successful hi-tech firm, including WIX, Taboola, Outbrain, ClickTale, LiveU, SQream, Plarium, JVP, OurCrowd, and Microsoft.Last year, eight startups were picked to join the accelerator program out of 224 startups that applied. A committee of 12 investors led by Yizhar Shai chose the eight winners. Within a very short period of time, the young companies succeeded in raising a total of $6.5 million and hiring 70 haredi employees. This year, 450 haredi startups have already applied from which eight will be chosen to participate.

If you run a young startup, have developed an interesting app or have a question, please feel free to contact info@social-wisdom.com.Translated by Hannah Hochner.