For five months, Obama and Netanyahu have been negotiating the terms of a new 10-year military aid package to replace the $30 billion package set to expire in 2018. 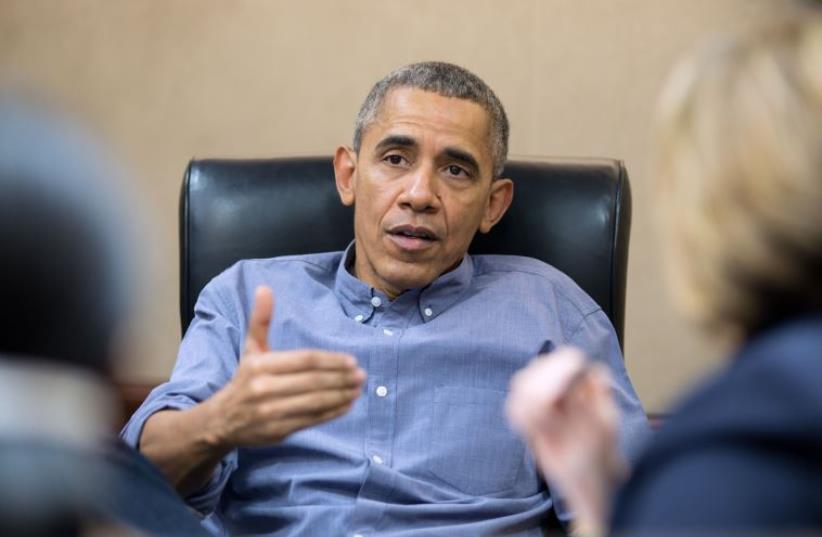 US President Barack Obama meets with staff in the White House Situation Room
(photo credit: OFFICIAL WHITE HOUSE PHOTO BY PETE SOUZA)
Advertisement
Shraga Brosh, the head of the Manufacturer's Association of Israel, urged Prime Minister Benjamin Netanyahu on Wednesday to reject a defense aid package deal reportedly proposed by US President Barack Obama, saying it would kill Israeli jobs and be a "mortal blow" to its defense industry."The Israeli government's acceptance of Obama's plan would be a mortal blow to Israel's defense manufacturing, and mean the loss of thousands of jobs in Israel in favor of the Americans," Brosh said. On Tuesday, Reuters reported that Obama wanted to ensure that all the funds in a new 10-year defense package would be spent on US-made arms, which would scrap the 26.3% of the aid that until now was converted to shekels and spent in Israel each year.For five months, Obama and Netanyahu have been negotiating the terms of a new 10-year military aid package to replace the $30 billion package set to expire in 2018. Netanyahu reportedly sought to raise the figure by $10 billion, for an increase of roughly $1 billion a year, including guarantees for missile defense.Brosh said that a caveat requiring all the money to be spent in the US would cost Israel's economy dearly, and that Netanyahu should reject any deal that includes such a clause. Even if America added $1 billion in annual aid, the clause would actually cut hundreds of millions of dollars of spending within Israel that supports the local industry.The defense industry, Brosh said, accounts for about 15% of all Israeli manufacturing jobs, and every $1 billion in defense procurement supports 2,000 direct jobs and 5,500 overall jobs in the economy. [Note: Cutting the US aid spending would amount to a roughly $800 million reduction in spending within Israel].In 2015, Israel's defense exports amounted to $5.7 billion, around 13% of all industrial exports. The loss of American procurement from aid would break up supply lines and technological investment that help the industry flourish, Brosh said.In February, Netanyahu said that concluding the new aid package may have to wait until a new President is in office, a comment some viewed as a bargaining tactic. Obama is thought to want a boost to Israel's defense aid in order to help compensate for the Iran nuclear deal, which Israel vocally opposed, and solidify his reputation as a president that was strong on Israeli security despite a rocky relationship with Netanyahu.Netanyahu may expect that Hillary Clinton, the likely Democratic nominee for president, would be more intent to cement her pro-Israel credentials should she be elected. But should presumptive Republican nominee Donald Trump succeed Obama, Netanyahu may run into difficulties. Trump recently outlined his foreign policy approach as "America First," which would seem to favor clauses that boost American jobs over Israeli ones. In March, Trump speculated that foreign aid recipients of all stripes, including Israel, should be forced to pay the US back for aid."These discussions are continuing and we remain hopeful we can reach agreement on a new MOU that will build on the United States' historic and enduring commitment to Israel's security," a White House official said in response to a Reuters request for confirmation of the latest negotiating terms.The official declined to comment directly on the terms.Reuters contributed to this report.