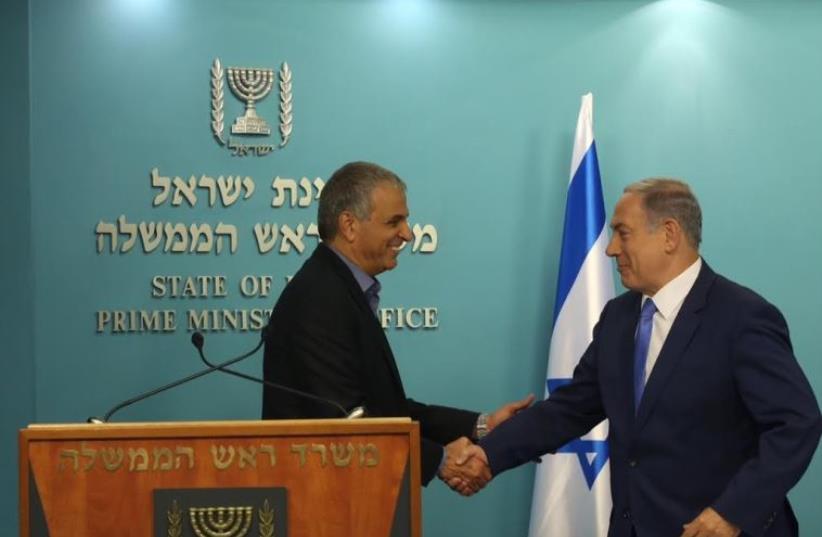 Finance Minister Moshe Kahlon (L) and Prime Minister Benjamin Netanyahu, September 3, 2015
(photo credit: MARC ISRAEL SELLEM/THE JERUSALEM POST)
Advertisement
Prime Minister Benjamin Netanyahu and Finance Minister Moshe Kahlon on Thursday announced plans to cut the Value Added Tax to 17 percent from its current 18%, and reduce corporate tax to 25% from 26.5%.“An economy that grows does it with low taxes,” said Netanyahu, speaking in Jerusalem with Kahlon. “We can do that, because an excess of billions in taxes has come to the state coffers, and instead of holding onto them, we decided to return them to you, the citizens of Israel.”The move, Kahlon said, would help fuel economic growth, which would lower Israel’s debt burden and budget deficit, both of which are calculated as a percentage of GDP. If Israel falls short of revenues, however, Kahlon said the government will need to take steps to fill the budgetary holes.“If, heaven forbid, we get stuck in a situation of slowdown and a serious problem with low revenues, we will have to take measures to fill them,” he said.Reducing VAT is aimed at lowering prices, which could fuel consumer spending and help stimulate the economy.Likewise, a reduction in corporate tax could, in theory, help companies increase wages, add jobs, or swell share prices in public companies, which would boost pension funds.Israel’s labor market is in good shape, with unemployment running at a healthy 5.3%, with a high labor participation rate hovering near 80%.Notably absent from the event was Bank of Israel Gov. Karnit Flug, the government’s top economic adviser.Moments before the press conference, the bank released a statement upbraiding the decision as “imprudent,” since the swell in tax revenues may have been a one-time event and not indicative of a trend.In July, the Finance Ministry found itself with an unexpected NIS 3.1 billion monthly budgetary surplus, which reduced the running 12-month deficit from 2.6% of GDP to 2.1%. Kahlon had planned to set the 2015 deficit at 2.9% of GDP.The sudden revenue increase, the central bank argued, may have been a result of a temporary upswing in real-estate transactions, which themselves were fueled by Kahlon’s announcement that he intended to increase taxes on property investments. Recent volatility in global markets and the decline in Israel’s exports and investment added to the uncertainty.“It would, therefore, be imprudent to regard the surpluses recorded in recent months as an ongoing development and to use it as a basis for revising expected tax revenues upward for next year,” the BoI statement said.The VAT decrease, it said, would cost the state NIS 4.8b., making it hard to hit the deficit target for 2016. As is, Kahlon’s 2.9% target would result in the first increase in Israel’s debt burden since 2009. The statement did not mention the corporate tax cut specifically.Regarding economic growth, initial estimates of Israel’s GDP growth from April to June showed the economy barely moving, with an expansion that amounted to a 0.3% annualized rate. That figure, which may be revised upward as more data become available, was a small fraction of the roughly 3% growth that had been anticipated for the year.The main driver of the slowdown, however, was a dramatic fall in exports, a phenomenon fueled by a strong shekel and weak growth among Israel’s main trade partners. BoI argued that reducing VAT, which fuels consumption, would not be effective given that Israelis were still buying at a healthy rate.Better to help exporters and boost investment, it argued.The announcement drew mixed reactions from members of the opposition.Former finance minister and Yesh Atid leader Yair Lapid, who raised VAT from 17% to 18% in 2013 to help drive down the deficit, said he supports the move, but believes it could create problems down the line.“If you’re creating a future economic crisis in order to pass out favors to Shas, to the haredim, to others, then something is wrong,” he said in a Channel 2 interview. Kahlon’s warning that he might have to backtrack, he added, creates uncertainty.Lapid’s former deputy at the Finance Ministry, MK Micky Levy, called the move “popular, but irresponsible.”“Kahlon’s celebration, like all celebrations, has a price, and the middle class will be asked to pay that price in the coming years,” he said.Socialist-leaning Zionist Union MK Shelly Yacimovich approved of the reduction, calling VAT a “regressive, cruel and unjust tax, especially when the country is on the brink of a recession.”Her party colleague MK Ayelet Nahmias-Verbin disagreed, however, saying that, while she expects Netanyahu to do whatever it takes to keep his seat, Kahlon, with his knowledge of the state’s finances, should have known better.