Transportation Minister Israel Katz toured the building site of the port on Tuesday, commenting on the impressive progress. 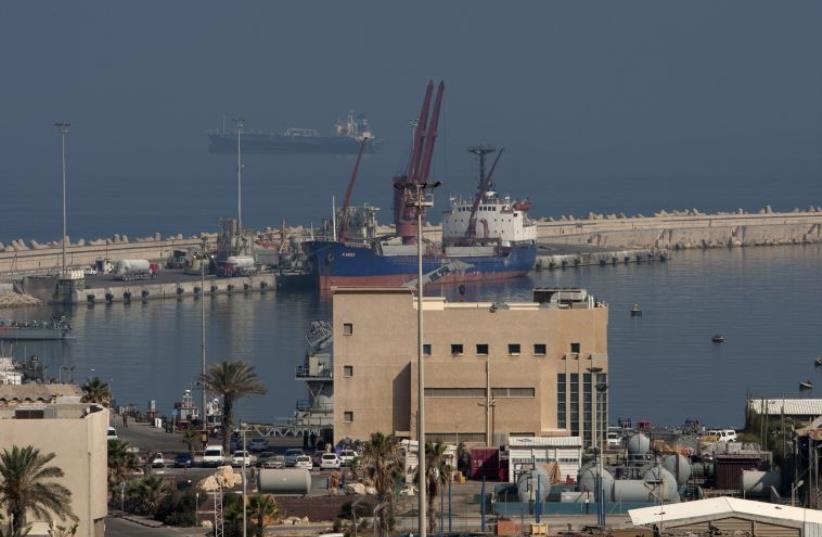 A general view shows the Israeli army navy port of Ashdod on May 31, 2010.
(photo credit: MENAHEM KAHANA / AFP)
Advertisement
The Israel Port Company on Tuesday said it was five months ahead of schedule in building the Southern Port, a new private port adjacent to the Ashdod Port, and intended to create competition for it.“The wave breaker is already 400m., and we will add another 400m. by the end of the year,” said Shlomo Breiman, CEO of Israel Ports Company.Transportation Minister Israel Katz toured the building site of the port on Tuesday, commenting on the impressive progress.“You’ve stepped into Moses’s shoes, turning water into land,” he told representatives of PMEC, the Chinese firm building the port. A significant early portion of the work involved building the Port’s quay – on what was once open sea – has been completed.In addition to building up the land for the terminal, PMEC has also begun setting up a secondary wave breaker and begun work on extending the primary wave breaker. To that end, PMEC built a first-ofits kind sea platform that can elevate to adjust to changing sea conditions. It is being used to deposit crate-like structures for the wave-breakers, which are later filled with rock and sand to weigh them down.Katz said he doesn’t expect the new port, set to begin operations in 2021, to put the Ashdod Port out of business. The Ashdod Port, he said, was in the process of a large infrastructure investment to ensure that it can compete with the new private port, which will be able to service 18,000-container ships.Israel’s current ports, long considered to be inefficient, corrupt, and under the thumbs of unions, are a choke point in the economy. The Port Company’s director Ram Belinkov told an anecdote of an Israeli pharmaceutical supplier that was running up storage costs because it kept a one-year supply of inventory. The reason, the supplier told him, was so that they would not miss a shipment to their main client in the event of a port strike or slowdown.Katz told a group of journalists that the Ashdod Port and its workers had come around after vehemently opposing the new port.“At the moment of truth, they agreed to fair competition,” he said. He also touted the fact that the ports company was paying for the infrastructure without straining the government’s budget. The funds are coming from a decade of port dividends (The fact that those dividends will not be paid to the government does represent a loss of revenue).He also noted that the new port could bring unexpected economic benefits. Not only is the process of building new ports deepening ties with contractors from China and Holland (the company that will operate the port is from the Netherlands), he said, but the increased capacity would boost Israel’s role as a land-bridge to trading with Arab countries.In February, The Jerusalem Post reported that Israel was becoming an ever-greater transfer point for trade between Europe and Turkey, on the one hand, and Jordan and other Arab countries, on the other.“This is an incredible connection,” Katz said of the ports and the infrastructure that get shipments from the sea to Jordan and beyond. “We are helping the Turks and others export to the Arab countries.”Asked whether there was concern that Israel’s role as a transit point would cause backlash, Katz responded: “Let’s just say the covert relationships with them are in much wider areas. If it’s happening in practice, there’s no problem.”