The 6 weekly flights will originate in Budapest, Hungary; Krakow, Poland; and Kaunas, Lithuania. 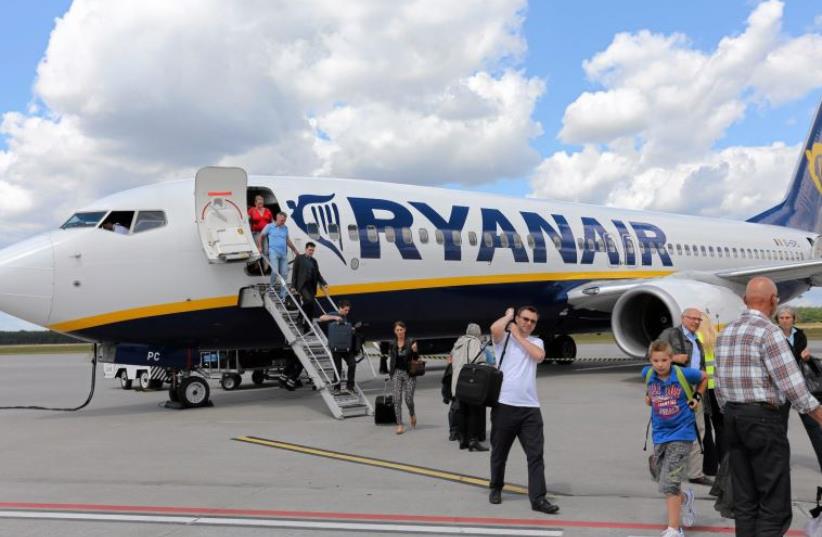 File photo of passangers leaving a Ryanair aircraft at Modlin airport near Warsaw, Poland June 26, 2014.
(photo credit: REUTERS)
Advertisement
Ryanair, one of Europe’s largest low-cost airlines, intends to open three routes from European destinations to Eilat’s Ovda Airport starting in November.“It’s about time we started flying to Israel, and we will shortly,” Ryanair chief commercial officer David O’Brian said Tuesday at a press conference in Tel Aviv.The six weekly flights will originate in Budapest, Hungary; Krakow, Poland; and Kaunas, Lithuania, and will start at around €30, although the price will vary, he said.The influx of new tourism to Eilat, which is not easily accessible from central Israel or Ben-Gurion Airport, may give a boost to the local economy and enhance its reputation among Europeans as a resort destination.“Your decision comes really at the right time, and we see it as a great vote of confidence in Israel, also in Eilat, which we think can be and will be a leading destination for vacations for people all around Europe,” Tourism Minister Yariv Levin told O’Brian.Tourism is a major portion of Eilat’s economy and is one of the reasons for the city’s continued exemption from the 18-percent value-added tax paid everywhere else in the country. But the city’s inaccessibility has proved a liability, and the vast majority of tourists are domestic.“The key problem is you can’t get there really,” O’Brian said. “Direct low-cost access is what will generate competitiveness.”Ryanair estimated that the new routes will generate $20 million in revenue from 40,000 passengers a year. Its recent decision to open routes to the Canary Islands off the coast of Spain had a similar effect, O’Brian said. The new options from Europe, he said, would put Eilat in competition with the Canaries and Morocco.O’Brian left open the possibility of expanding further routes to Eilat, which is building a new international airport that is expected to open in 2017, and to Tel Aviv. A Cyprus-Tel Aviv route, in particular, was under discussion, he said.But despite the opportunities that Israel’s 2013 Open Skies agreement created for European low-cost airlines to open routes to Israel, several challenges remain for expanding to Tel Aviv.Ben-Gurion Airport, O’Brian said, was some 30% more expensive for airline operators than Copenhagen and twice as expensive as Cologne, each of which are situated in much larger population centers. Tel Aviv is also further away than other European destinations and has longer turnaround times for flights, meaning it would take more time and resources than other destinations.That’s one of the reasons the first three routes are connected to Eastern Europe and not to more distant destinations.“It probably has half the traffic that it really should have,” O’Brian said about Ben-Gurion Airport.Nevertheless, progress in Israel has been steady and the company has room to further expand local operations, he said.Asked if the threat of rockets or the security situation worried him, O’Brian replied: “We don’t see any particular issue with that.”