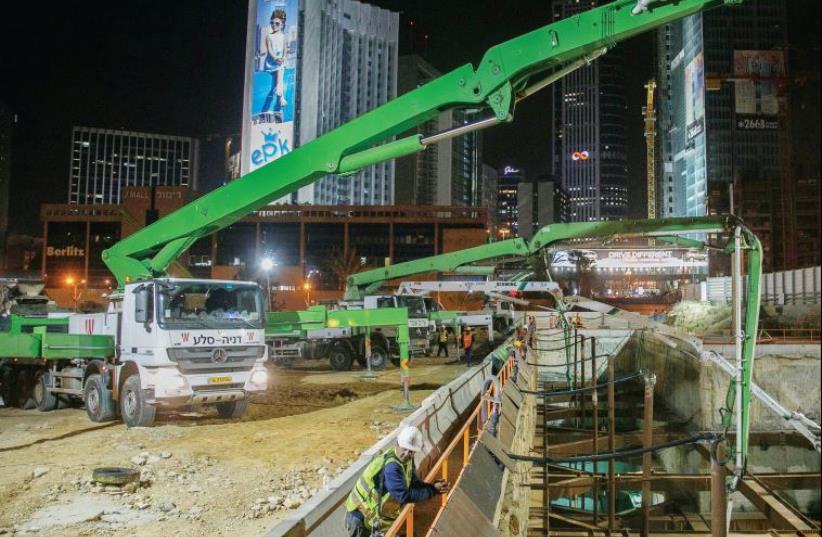 Work on the Tel Aviv light rail.
(photo credit: COURTESY NTA)
Advertisement
The Finance Ministry’s committee for national infrastructure on Monday approved plans for the southern portion of a second light rail in the greater Tel Aviv area, passing it on for a 60-day period of public comment and local approval.The Green Line is the second of eight lines in a master plan for improving public transportation in and around the Tel Aviv metropolitan area, and would travel from Herzliya to Holon and Rishon Lezion, with stops in Tel Aviv along the way.The plans for the southern portion call for roughly 17 km. of track – 2.5 km. in Tel Aviv, 4.2 km. in Rishon Lezion, and 10.3 km. in Holon.From the Lewinsky Station in Tel Aviv, it will continue to Sokolov Street in Holon where it will split into two branches. The western branch will continue through Holon and into Rishon Lezion, where it will connect with the Red Line, the Moshe Dayan train station and, in the future, the Brown Line. The eastern branch will run along Jerusalem Boulevard, cross Highway 4, and end near Highway 412.The central portion of the track has already been approved, and the north - ern portion is scheduled for discussion in roughly six months.The Red Line, which is already under construction, will run from Petah Tikva to Holon and include nine underground stations. It is projected to be completed in late 2021.Owners of business along the Red Line complain that the construction has reduced foot traffic and sales, and is putting their livelihoods in danger.The government has promised to help them make it through the tough construction period, and predicted that there would be a big payoff when the rail is up and running.