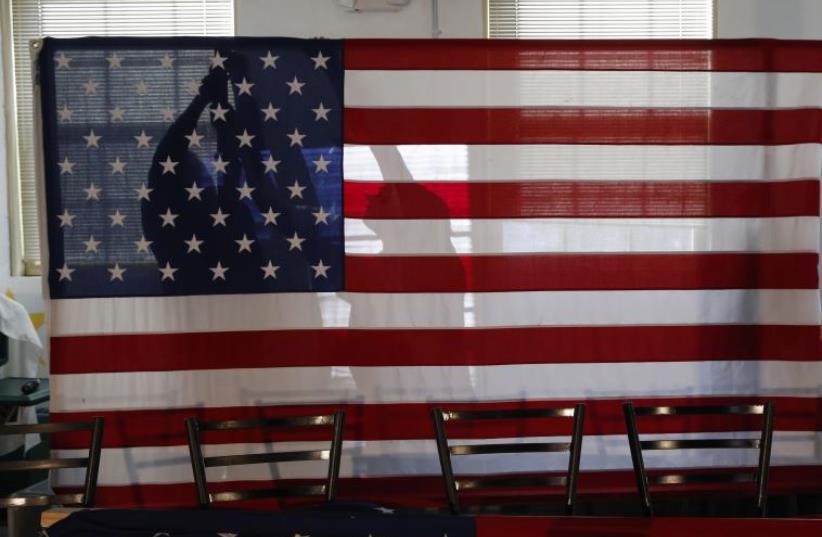 Campaign workers for U.S. Republican presidential candidate and New Jersey Governor Chris Christie put up an American flag before his town hall campaign stop at the Hampton Academy in Hampton, New Hampshire February 7, 2016
(photo credit: REUTERS)
Advertisement
The temporary injunction the High Court of Justice imposed on a tax information agreement between the US and Israel on Wednesday could pose problems for the relationship between the allies.Justice Hanan Meltzer decided on a temporary injunction stopping Israel’s implementation of the Foreign Account Tax Compliance Act (FATCA), an American law that requires countries to provide the American Internal Revenue Service information on American bank account holders with over $50,000 in their accounts. The injunction would prevent Israel from sharing personal financial data with the IRS.The case, which was brought against the state by Republicans Overseas in Israel and Rinat Schreiber, contends that the agreement is too far-reaching.Marc Zell, chairman of Republicans Overseas in Israel, blasted the law as discriminatory against expatriates.“The sole justification for this discriminatory law was to enforce US tax legislation without any benefit to the Israeli state or public other than to avoid the punitive impact of American extraterritorial legislation,” he said.Meltzer’s injunction called into question the legality of the law passed by the Knesset this summer, which would implement the information exchange between the two countries. FATCA, which aims to uncover tax evasion, threatens with severe sanctions those foreign banks that do not comply.The state is concerned that an injunction might cause the US to label Israel’s banks as noncompliant, and shut them out of interacting with crucial financial counterparts.The court will further discuss the petition on the agreement – which is set to go into effect on September 30 – on September 12.FATCA has had many critics, especially among ex-pats who maintain American citizenship, but haven’t lived there for many years or don’t plan to live there again. Information uncovered through FATCA could expose Americans who have not been careful about filing taxes and reporting their foreign bank accounts (even though many American ex-pats are exempt from paying taxes while earning below a certain threshold, they are still required to file, and can face tough fines if they do not).Nigel Green, CEO of the financial advisory organization the deVere Group, applauded the court’s actions as a step against FATCA, which he called “toxic, flawed, imperialistic legislation.”Though catching tax evaders is a noble aim, he said, the approach has been untargeted.“What it does – because of its plethora of serious unintended adverse consequences – is to brand the seven million Americans who choose to live and/or work overseas, including many of the 300,000 in Israel for example, as financial pariahs,” he said.If the court upholds its ban, however, the Israeli government will have to find a new arrangement that satisfies American lawmakers.