The Israeli hi-tech industry, will broadcast live via Facebook a wide range of content geared toward an audience of programmers and entrepreneurs in hi-tech companies. 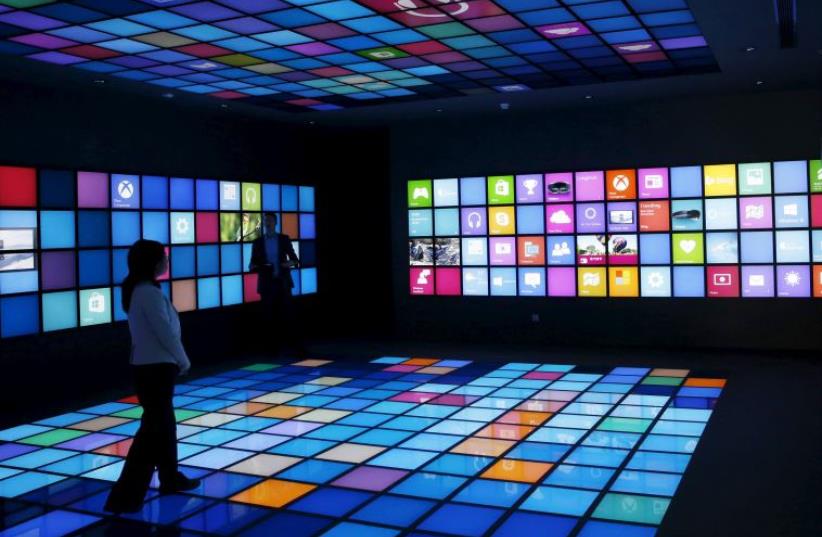 A reporter looks around a display of Microsoft China Center One
(photo credit: REUTERS)
Advertisement
Microsoft’s research and development center has launched a mobile studio for live broadcast using the Facebook live platform. The studio, a first of its kind in the Israeli hi-tech industry, will broadcast live via Facebook a wide range of content geared toward an audience of programmers and entrepreneurs in hi-tech companies, startups, venture-capital funds and more.The studio will transmit activities and events taking place at the R&D center and will be available free of charge for bloggers, industry people and entrepreneurs who wish to share content and contribute to the industry. The studio will also be used to transmit professional workshops and live tutorials of new technology and products. After work hours, Microsoft developers will be able to use the studio to share their knowledge and interests with their friends on the largest social network in the world.“The capabilities and qualities of Facebook’s live transmission today allow the establishment of a studio that will be greatly beneficial for the industry,” Microsoft Israel R&D vice president of marketing and product strategy Merav Bahat said. “The studio was built as a platform for multidimensional discussions between communities of developers, between entrepreneurs and investors and more. This is an opportunity for all parties to arouse interest and to receive feedback and insight that will benefit the development and initiatives.”Intel Capital to invest in local startups Intel Capital, Intel’s investments branch, has announced a new investment of more than $25 million in three Israeli startups.“These investments in companies dealing with cloud computing, machine learning and network infrastructure testify to the variety of talent in Israel, and I cannot wait to see them realize their potential,” Intel Capital managing director Marcin Hejka said.The companies that received investments include Velostrata and Panoply, which enable businesses to take advantage of the cloud’s strength.With their help, companies can transfer workloads to the cloud within minutes instead of within weeks.The third company is Sedona Systems, which improves connectivity of networks around the world and the efficiency of data centers.Since 1997, Intel Capital has invested a total of $345m. in more than 80 Israeli companies.“I am proud of this investment portfolio,” Hejka said. “Every investment we made is a promise to give our entrepreneurs value and expertise greater than capital through exposing them to Intel’s technology echo system, which includes technologies, clients and other resources. We intend to continue fulfilling this promise.”