Tech talk: And the results of the 2017 Geek Awards are in!

Tens of thousands of people voted and 24 judges from Israel’s hi-tech industry decided which individuals and companies deserved to win this year’s Geek Awards 2017. 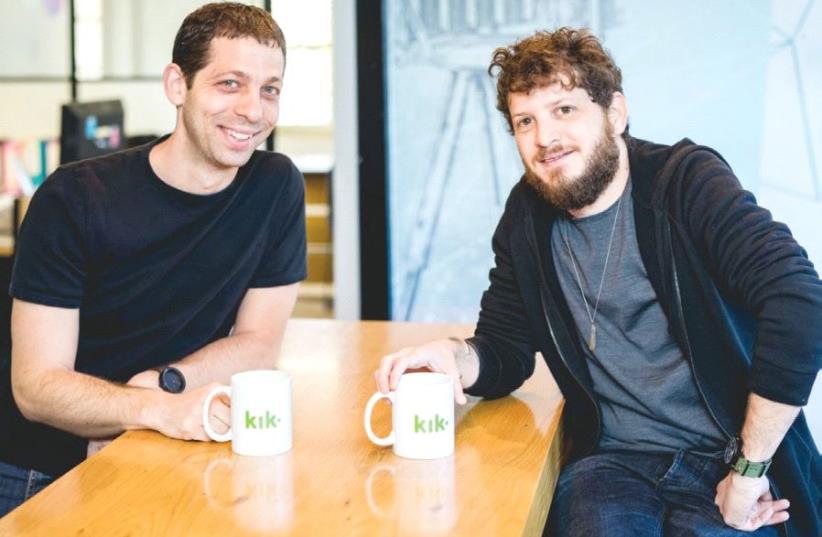 ROUNDS FOUNDERS Dany Fishel (left) and Ilan Leibovich have recently merged their company with Canada’s Kik Interactive.
(photo credit: TOMER FOLTYN)
Advertisement
Israeli group video chat platform Rounds was recently acquired by Canadian Kik Interactive, an app-based alternative to standard texting as well as a social networking app for smartphones, with more than 300 million users. Founded in 2009, Kik is considered a Unicorn in the world of smartphones, and is valued at over $1 billion. Among its investors are Tencent, the Chinese software giant that also owns WeChat, which is the most popular text app in China, Square Union, and Spark Capital.The impetus for the merger was Kik’s desire to strengthen its video chat capabilities, expand its Live services, and to open its first international R&D center outside of Canada. Rounds merges communication and entertainment together into a fun interactive video chat experience by enabling up to 12 friends to simultaneously video chat while experiencing activities together such as watching videos, playing games, sharing photos, and more. Rounds has more than 40 million users. Rounds’s 35 employees in Israel will become part of Kik’s development center in Tel Aviv, joining Kik’s 130 current employees. Senior Rounds executives will be integrated into Kik’s management.“HD quality video chat and live games are the next step for all the leading chat apps and satisfy people’s desire to spend time with other people online just like they do in real life,” says Dany Fishel, Rounds cofounder and CEO. “Kik is the perfect partner for us, since their product strategy, dominant market position, and young audience will enable our Tel Aviv team to contribute significantly to company growth. It’s so rare to see two companies merge that have such a similar corporate culture as well as a shared vision. We’re very excited to build future products together.”

Geek Awards 2017 Tens of thousands of people voted and 24 judges from Israel’s hi-tech industry decided which individuals and companies deserved to win this year’s Geek Awards 2017.The startup of the year was Appsflyer, which develops systems that track mobile-app marketing and monitor billions of events. With Appsflyer, advertising agencies can track campaigns in over 800 ad networks, including Facebook, Google and Twitter.The award for Best New Startup of the Year went to Lemonade. Despite being such a young company, Lemonade has succeeded in competing with veteran American insurance agencies. Its P2P insurance platform is powered by artificial intelligence and behavioral economics. The startup was founded by two serial entrepreneurs: CEO Daniel Schreiber (former president of Powermat) and president and CTO Shai Winniger (a cofounder of Fiverr.com).Maya Gura of MissBeez was chosen as Geek Awards 2017’s Female CEO of the Year. Gura is also a cofounder of The Gift Project, which was acquired by eBay in 2011 for tens of millions of dollars. MissBeez is an Israeli startup that allows the busy women of today to order beauty services to their offices or homes. “What makes this new enterprise special is that it is entirely focused on women,” Gura says, “unlike other startups, dominated by men.” She adds that “It connects people who have time but no resources to people who don’t have time but have lots of resources.” Gura wanted to create a business that would allow women to have flexibility in their work schedule, while making a respectable living to care for themselves and their families.The VC of the Year went to Bessemer Venture Partners, an American global venture capital firm that was founded in 1911, and has made over 600 investments in over 300 companies. Bessemer is one of the first VC funds to have expanded to Israel, and has a number of Israeli startups in its portfolio, including Fiverr, illusive networks, and Team8. It’s currently managing funds valued at $1.6 billion. In 2016, Bessemer carried out a huge number of IPOs and exits, including CloudLock, which was acquired by Cisco for $293 million; Leaba Semiconductor, also sold to Cisco, for $380m.; and Ravello Systems, which was acquired by Oracle for $500m.If you run a young startup, have developed an interesting app or have a question, please feel free to contact info@social-wisdom.com.