Buzz Aldrin to step foot in Israel for first time 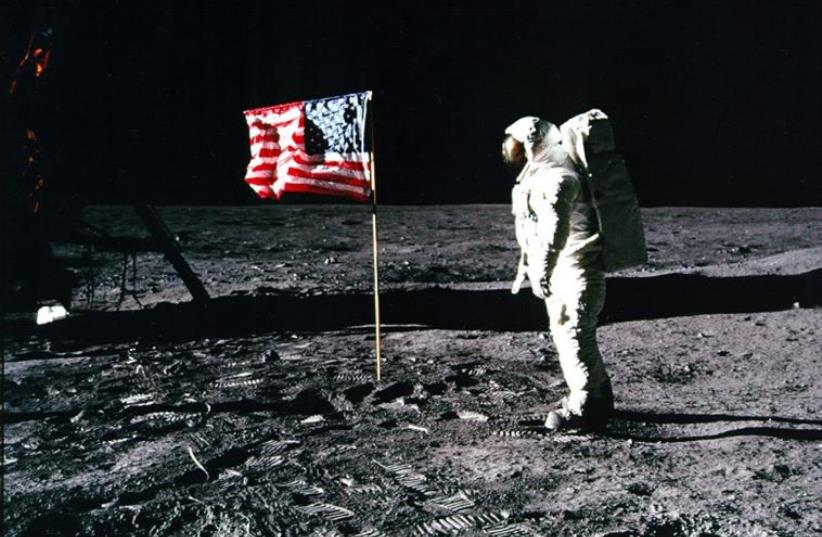 US astronaut Buzz Aldrin after he and fellow astronaut Neil Armstrong became the first men to land on the Moon during the Apollo 11 space mission July 20, 1969.
(photo credit: REUTERS/NEIL ARMSTRONG/NASA/HANDOUT)
Advertisement
Nearly 50 years after former NASA astronaut Buzz Aldrin stepped foot on the moon after his copilot Neal Armstrong, the renowned octogenarian is once again to follow Armstrong’s lead when he steps foot in Israel for the first time this October.Aldrin, 85, who was part of the historic 1969 Apollo 11 team’s moon landing, is scheduled to be among the experts participating in the International Astronautical Federation’s annual International Astronautical Congress, which will be held  in Jerusalem, the federation announced on Thursday.Billed as “Space – The Gateway for Mankind’s Future,” the 66th annual IAC conference – which is hosted in a different country every year – features panel discussions and workshops with the world’s leading space experts about a wide range of topics and developments.The IAF was founded in 1951 to foster dialogue between scientists around the world, while harnessing international cooperation in all space-related activities.The federation has since become the world’s leading space advocacy body, with 300 members – including all key space agencies, companies, societies, associations and institutes – across 62 countries.“We have the honor and privilege to host the 66th IAF International Astronautical Congress in Jerusalem,” the IAC’s local planning committee said, calling the city “a cradle of faith and hope, with an abundance of history and religious significance for many different faiths – where the ancient and modern come together.”The IAC praised Israel’s innovation in the hi-tech and academic sectors, which it said made it an ideal venue to host the conference.“Many of Israel’s hi-tech companies – with their diverse space industrial facilities, space technology, expertise and know-how – have much to offer to the international space community,” the organization continued.“Israel’s academia and research institutions represent the cutting edge of research, technology, development and space exploration, which will be available for IAC participants to experience, gain first-hand knowledge of, and discover.”The five-day conference, which is being held in coordination with the Science, Technology and Space Ministry, is to take place at the Jerusalem International Convention Center from October 12-16.