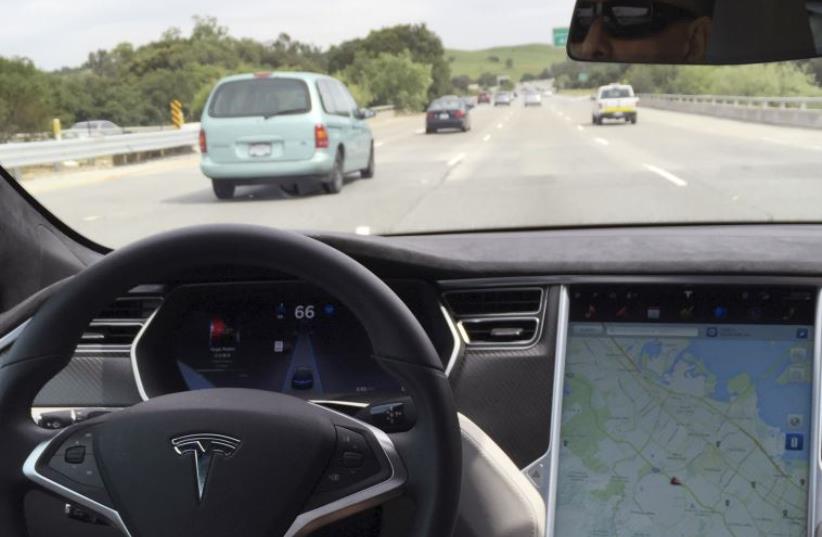 The interior of a Tesla Model S is shown in autopilot mode in San Francisco, California, U.S., April 7, 2016.
(photo credit: REUTERS)
Advertisement
It was a moment the nascent autonomous car industry knew would come, and in May, tragically it did. Joshua Brown was killed when his Tesla Model S, in autopilot mode, crashed into a white trailer which it failed to distinguish from the cloudy sky.Though Brown’s tragedy puts a name and a face with a fatality linked to incomplete technology, regulators expect that far fewer people will ultimately die or be injured as driverless technology advances.“By 2040 people won’t be allowed to drive on public roads, because people make many more mistakes than machines, and we think that autonomous vehicles will dramatically reduce the number of fatalities from car accidents,” Dr. Shay Soffer, the Ministry of Transport’s chief scientist told The Jerusalem Post.That, he said, is why Israel is pushing to be on the cutting edge of driverless-car technology, both in terms of helping companies such as Mobileye develop it, and in terms of getting it on the road.Mobileye, whose technology is reportedly embedded in Tesla’s cars, currently has three driverless cars roaming Israel’s streets, though they are required to have an alert driver at the wheel to take control should things go awry. The cars are constantly collecting data to feed back into the Mobileye system.Beyond that, however, Israel is already at work setting traffic regulations to introduce driverless vehicles onto the road.Recently, said Soffer, the Transportation Ministry struck an agreement with US Transportation Secretary Anthony Foxx on a mutual R&D deal in the field, to which each country will contribute $10 million. Part of that fund will go toward developing a “center of excellence” for driverless cars on a 500-dunam stretch in southeast Netanya, to open in about half a year.As driverless cars continue to develop and become safer, circa 2020, they will be allowed in special, dedicated highway lanes. Those lanes will later integrate taxis, buses and other public transport. Next, driverless cars will be allowed in all lanes, both in cities and highways. And eventually, people foolhardy enough to take their lives in their hands by driving their own vehicles will be banned from the roads, relegated instead to specialized areas for hobbyists.In Soffer’s view, there are a slew of reasons to encourage the coming autonomous vehicle revolution. It will change the face of public transport and commuting, as driverless ride-sharing becomes the norm. It will transform road usage and traffic, and clear parking lots in high-demand areas.And it will certainly sweep aside the current argument about whether or not to allow ride-sharing through companies like Uber.“Remember laserdisc? It was around for the short time until DVDs entered,” he said, referencing a flashin- the-pan technology that appeared at the end of the video cassette era.Ride-sharing, though useful in the interim, will only be a temporary solution until driverless cars are mainstream, he predicts.In Israel, where there are heightened concerns about security in ride-sharing services such as UberX (which is not yet legal), driverless taxis offer a useful solution.Not everyone will benefit.“I think that a taxi driver is something that won’t be around in 20 years’s time. This expertise will vanish, like so many forms of expertise that have gone,” he said.And in the meantime, Israel will still continue to invest in long-distance transport, such as inter-city trains.Feasibility studies for the pod-like SkyTran project are also advancing, he said.The ministry is also interested in electric vehicles, such as shared motor scooters and quadricylces. (“They are the future. We really hope that we have a lot of stations for these kinds of vehicles,” Soffer said.) But the most important benefit from driverless cars will be the sheer volume of human lives they save, including the roughly 50 percent of auto-related fatalities in Israel who are pedestrians.Which brings us back to Joshua Brown.“Unfortunately, I think this was the driver’s fault”, said Soffer. Tesla’s technology, still in “beta” mode, requires the driver to remain alert and at-the-ready, though critics note that any autopilot mode that requires a pilot is sends a mixed message.The lessons from Brown’s case, Soffer said, are that the government must be careful with the introduction of the technology, that the technology still has a ways to go before it is ready, and that developers must be vigilant in considering every possible situation when programming the cars.