The company will supply equipment for meeting the operational needs of an entire army in an African country. 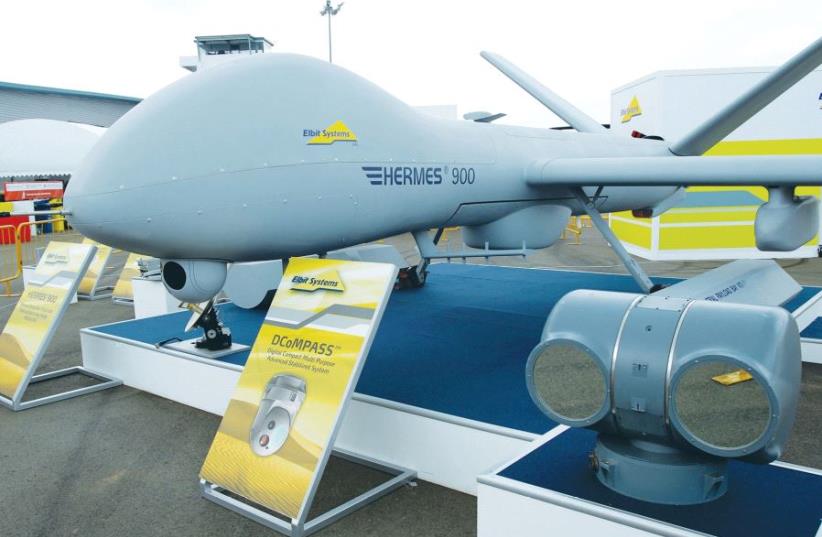 AN ELBIT SYSTEMS Hermes 900 medium-size, multi-payload drone is exhibited at the Singapore Airshow last week.
(photo credit: REUTERS)
Israeli defense electronics company Elbit Systems Ltd. (Nasdaq: ESLT; TASE: ESLT) today reported a $240 million deal to supply a variety of defense systems to an African country. The deal marks a significant achievement for the company in the African market.Elbit Systems declined to state what country was involved, explaining that the country did not want its large-scale procurement of weapons systems to be exposed. Under the terms of the agreement with the African customer, Elbit Systems will supply various weapons systems within two years. Defense market sources say that the equipment involved is designed to meet the operational needs of an entire army in various spheres.In addition to upgrading the country's used helicopters, Elbit Systems' deal includes the sale of the multi-spectral infrared countermeasure (MUSIC) system, which protects aircraft against missiles. This system detects and identifies missiles launched against aircraft, calculates their path, and uses a laser beam to divert them away from the aircraft.Commenting today on the African deal, Elbit Systems president and CEO Bezhalel Machlis said, "Our unique structure enables the customer to benefit from the synergy of its overall capabilities while, at the same time, focus on its requirements. Our portfolio, based on cutting-edge technologies and operational know-how, allows us to customize our solutions and tailor them to our customer's needs, and we hope others will follow this trend."In June, Elbit Systems reported a $20 million MUSIC systems deal in another African country. The company has also had several other small-scale deals in Africa in recent years. The $240 million deal announced today is Elbit Systems' biggest-ever deal in Africa. Up until now, Elbit Systems has focused on other markets, mainly in Europe, North America, and the Pacific Rim.IDF land forces commander Major General Kobi Barak has ordered the grounding of the Skylark 1 UAV system, after two of them crashed yesterday: one in the Hevron area and one in the Bethlehem area. IDF patrols found the two UAVs, which are being used by the IDF infantry forces in the framework of their regular operations.Elbit Systems, which developed and manufactures the Skylark 1, declined to respond. The IDF is planning to procure the more advanced Skylark 3 from Elbit Systems for these missions.