There were 600 participants in attendance from around the globe, including 200 each from Israel, Europe and North America. 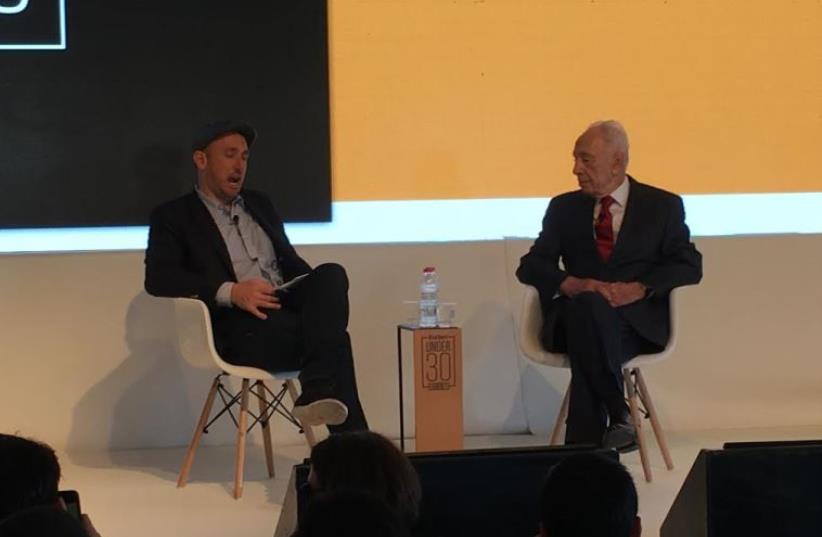 Shimon Peres with Forbes editor Randall Lane.
(photo credit: NIV ELIS)
Advertisement
Adorned with wrist bands, ticket books, name tags and special networking pins, some 600 participants gathered at Tel Aviv’s Station Complex on Monday for the “Forbes 30 Under 30” summit to celebrate innovation, business and celebrity.The summit, the first Forbes has held outside of the US, aims to spotlight successful young business people, but does so with media-savvy pizzazz.The day started with an address from former president Shimon Peres “We save the best for first,” Forbes editor Randall Lane said, before making the 93-year-old the first honorary member of the “30 Under 30” club.Lane’s decision to bring the summit to Israel followed his June visit to the country, he said, when the view of the Mediterranean Sea from the rooftop of a hi-tech accelerator – along with a nudge from President Reuven Rivlin – convinced him that Israel was the right destination for the first European leg of the summit.Participants attended from around the globe, including 200 each from Israel, Europe and North America.Zosia Mamet, star of the television series Girls and X-Men actor Evan Jonigkeit came to deliver a message on the importance of storytelling in business. Monica Lewinsky, who has turned her career toward speaking out against cyberbullying, is slated to give a talk on the importance of kindness in speech later in the week.Yossi Vardi, considered the grandfather of Israel’s start-up scene, was on hand to direct a panel, and noted that youth have a certain advantage in the world of tech.“This generation, they’re true digital natives,” he said while enjoying a freshly made serving of coconut ice cream. The young generation, he said, grew up with technology and have a symbiotic relationship.“For them, it’s the prime way of self-expression and getting all these guys to come here to Israel is very important,” he said.Shai Agassi, who captured the nation’s imagination with the ultimately- failed electric car company Better Place, spoke of the importance of taking risks. “Be willing to fail,” he urged. “The margin between failure and success is minuscule.”The summit, which will continue with events in Jerusalem, a service day, and a hackathon, also brought good business news with it.Meron Gribetz, the CEO of augmented- reality company Meta, announced that the company would open its first R&D center in Israel.