The inclusive strategy Microsoft Israel pioneered with Think Next seven years ago is now central to the company’s vision for the future. 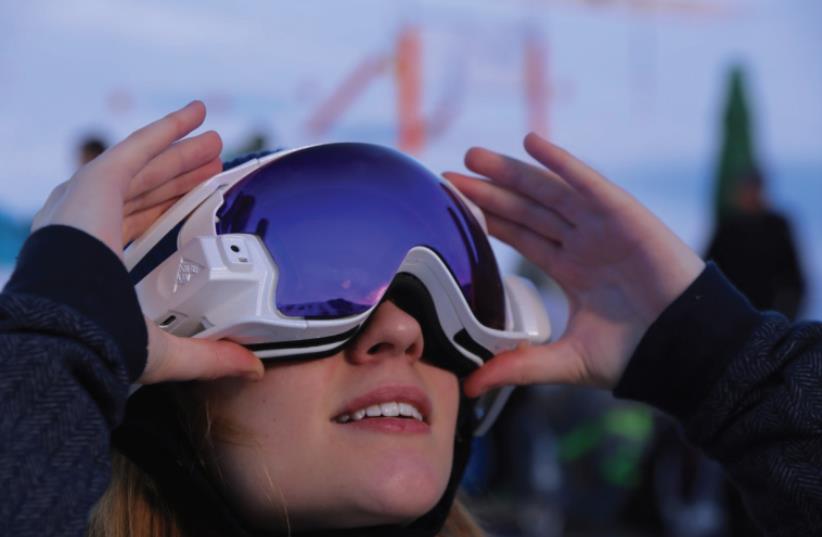 RIDEON’S ADDITION for ski goggles lets skiers access maps, play music, chat with friends and play interactive games
(photo credit: Courtesy)
Advertisement
Under the leadership of CEO Satya Nadella, Microsoft is becoming the kind of corporation that embraces events like Think Next, which Microsoft Israel debuted seven years ago.The event, which selects promising start-ups of every stripe and flavor and showcases them to some 1,500 tech leaders, seeks to establish Microsoft as an open, accessible platform for developers to reach any market.“We see ourselves as a major industry player in Israel. We hire people, we work with start-ups, we acquire in Israel, we’re an industry player,” Zack Weisfeld, general manager of Microsoft Ventures Accelerators told The Jerusalem Post Tuesday, prior to the event’s opening.“Think Next is one of our opportunities to be as close as it gets to the industry. It includes the top investors, deans from academia and start-ups. It’s a great way to keep our finger on the pulse,” he added.The start-ups and platforms on display at Think Next are not required to run on Microsoft software. They do not need to use Microsoft’s cloud or Windows, and many work in some capacity with competing software, such as iOS or android.Last week, at the company’s developer conference Build, Nadella announced tools for helping iOS and android app developers easily convert their programs to Windows.The move was essentially an admission that Windows could not compete with the two as a mobile platform on its own, but was also a clever way to help reintroduce developers to Microsoft and fill out its so-far lackluster app store.Under Nadella, Microsoft has also rolled out more of its own programs, such as Office, as apps for other platforms.Use of iPads in Microsoft ads would have been sacrilege a few years back. Now they are commonplace.In other words, the inclusive strategy Microsoft Israel pioneered with Think Next seven years ago is now central to the company’s vision for the future. It is perhaps unsurprising that the event is now being recreated in the United States and India.Similarly, Microsoft’s accelerator, which began in Israel in 2012 with the same open philosophy, has caught fire. The company has since opened seven around the world, from Bangalore to Beijing, and garnered awards as the top incubator in China and India.“It’s the feeling of being connected, and being one of the top entrepreneurship programs is a great thing for the company to go through because we are engaged with some of the most exciting technologies out there,” said Weisfeld.Of the 340 companies that graduated from Microsoft accelerators globally, 80 percent received follow- on funding averaging $2.5 million.Of those companies, there have already been 17 exits, including one IPO. Microsoft only acquired one of them, with Google and Yahoo each scooping one up as well.Tuesday’s Think Next event included both Microsoft-developed technology and Israeli innovation.Among them were RideOn, which developed a Google Glass-like addition for ski goggles to help skiers do anything from access maps to music without using their hands. It is somewhat reminiscent of Microsoft’s upcoming HoloLens.Another company on display, Visualead, makes clunky QR codes (those bar code-like squares that smartphones can read) into beautiful designs. It recently received a strategic investment from Alibaba.A third, called ThirdEye, created a computer vision system that can help drones navigate.The expansion of Microsoft Israel’s ideas within the company seem to show that the company is as interested in Israel’s business innovation as much as its technological innovation.That, too, shows no sign of slowing; a third of Microsoft’s nine recent start-up acquisitions have come from Israel.