If Israel wants its children to be ready to tackle the kinds of jobs that will be around in the future, it will need to boost its education and invest in diversity measures. 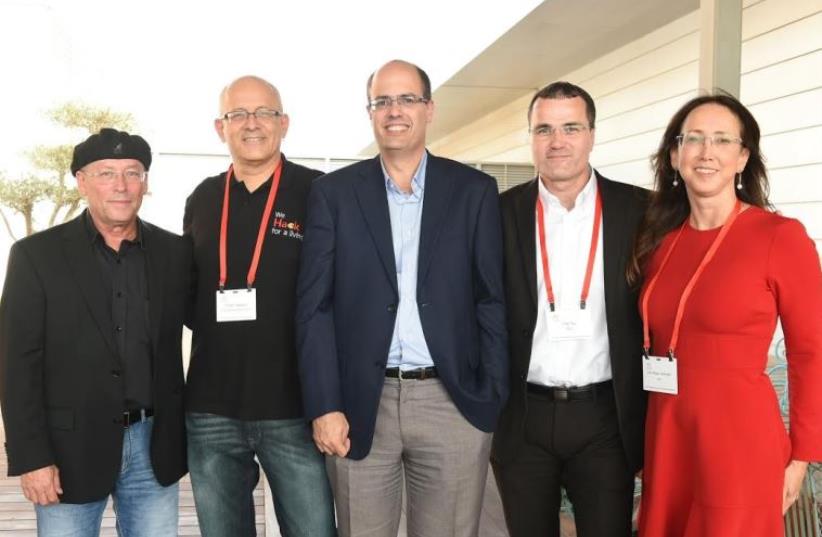 From R to L, IATI CEO Karin Mayer Rubenstein, EMC Israel GM Erez Tsur, Chief Scientist Avi Hasson, Microsoft Israel GM Manager, and former Intel Israel CEO Mooly Eden
(photo credit: CHAIM BACHIR)
Advertisement
Israel’s future as an innovator and research center for the world’s biggest tech companies is in peril due to a shortage of “geeks,” according to members of Israel Advanced Technology Industries, an association of hi-tech and life-science industries.“If we do not address them, these challenges will lead to our demise in hi-tech,” said Yoram Yaacovi, the general manager of the Microsoft Israel R&D Center and chairman of IATI’s multinational corporation forum, which took place at the Hewlett-Packard offices in Yehud on Sunday.The “geek shortage,” he said, was already apparent, as Israel struggles to fill positions for engineers.Only half of Israeli schools offer a full five-unit mathematics course, while undergraduate students studying science, technology, engineering and math (STEM) fields had fallen from 8.3 percent in 2001 to 5.7% in 2013.Israel’s Arab and ultra-Orthodox communities, which are slated to represent half of the population by 2059, are even further behind in STEM education, Yaacovi said. Just 2,200 Arabs worked in hi-tech last year, representing roughly 1% of the field.Arabs comprise about 20% of Israel’s population. The number of haredim who work in the field amount to a rounding error, he said.The problems will affect Israel’s hi-tech industry and its economy as a whole, said Erez Tzur, the general manager of EMC Israel and the event’s cochairman.If Israel wants its children to be ready to tackle the kinds of jobs that will be around in the future, Yaacovi said, Israel will need to boost its education and invest in diversity measures.Being that Israel does not open its doors to skilled migrants from countries such as India and China leaves it with fewer options than its competitors, he said.“Are we ready to do that? I don’t think so, as a country,” Yaacovi said. “But eventually we might have to.”The gathering is a show of muscle for Israel’s hi-tech industry, which hopes to keep the heat on the government for solving medium- and long-term problems that will affect the industry.“This is the only gathering of its kind in the world,” IATI CEO Karin Mayer Rubinstein said, noting the presence of general managers from some 80 leading R&D centers in Israel.Vinod J. Devan, a consulting partner at Monitor Deloitte in Palo Alto, California, struck a brighter note.“Israel is the only place that has a constant, consistent reputation of delivering not just in R&D, but in innovation,” he said.Big companies, Devan said, should use their research and development departments to drive their missions and not simply execute their preexisting goals. That dynamic, he said, could make Israel a more important player at the table of the world’s biggest tech companies.