Israeli designer takes 3D printed fashion a step further
Advertisement
A young Israeli designer has taken three-dimensional printed fashion a step further by printing her entire graduate collection by 3D home printers.
Danit Peleg, a 27-year-old designer from Tel Aviv who graduated from Israel's Shenkar College of Engineering and Design in August, says her 3D collection envisaged a world where people would be able to download their favorite t-shirt and print it at home at the "click of a button."
The project started two years ago when as an intern in New York City, Peleg saw a fashion object printed by an industrial machine and made out of a hard plastic. Peleg says she noticed the models who wore the garments could barely move while walking, let alone sit down.
She says she was inspired by the experience and when she returned to Israel she decided to research 3D printed fashion technology to share the experience of making clothes with others, and create more wearable garments that feel closer to ordinary fabric.
"Until now we only saw fashion designers experiment with industrial 3D printers and I wanted to try and print an entire fashion collection at home, using only 3D printers," she told Reuters from her Tel Aviv flat, a home to her studio where she printed her entire collection. 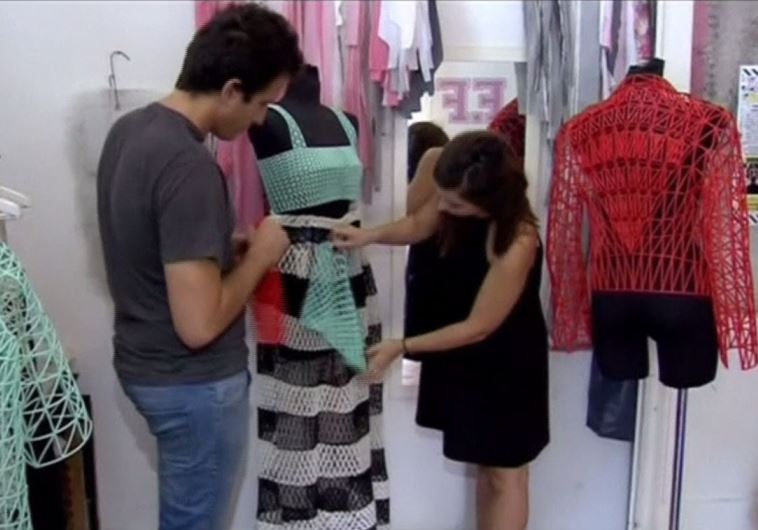 With an average of 300 hours printing time for a garment, she says it took more than 2,000 hours and up to six 3D home printers which were working simultaneously at times, to create the entire collection. She also printed 3D high heeled shoes, to create a full 3D wardrobe her models can showcase on catwalks.
Peleg says the designing process of her 3D collection had similarities to the old-fashioned way of making clothes. She used 2D software to create the pattern of the garment, then transported it into 3D software. She then cut the designs to fit the printer's A4 plate size, and after the pieces were printed she glued them together to make a 3D garment.
Searching for a flexible, wearable material, Peleg chose to use a filament called FilaFlex which feels like rubber.
The result is a colorful, fairly comfortable, and sometimes bouncy material with a lace-like texture. It is easy to wear and is attracting attention from international designers as well as online consumers, said Peleg.
Clients can downloaded the collection on any computer and print it at home or at a nearby lab.
"You can take my file of a garment, of a jacket for example, and then just print it at the closest lab to your house. You don't need to know fashion designing or sewing because you can just print it and build it, just like a puzzle," says Peleg.
The triangular, geometric shapes of the collection fabrics were inspired by Eugene Delacroix's painting "Liberty Leading the People", a copy of which is hanging on her studio wall. 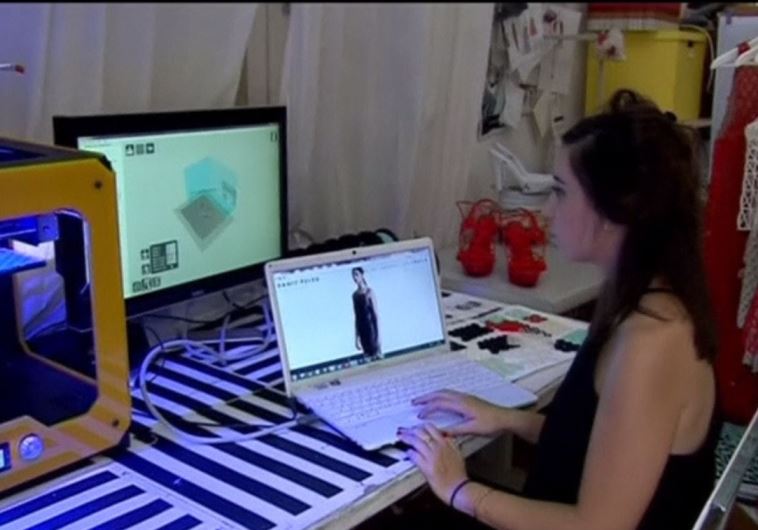 Eitan Tsarfati, co-general manager of Autodesk Israel, a design software and services company, which introduces an open, free 3D-printing design center, says 3D fashion is becoming trendier among designers in the fashion industry.
"It looks like something in the future but there are a lot of developments that are going on today. A lot of artists are looking into it, you can see it in fashion shows and this is where it's all beginning, when you see designers who are looking into solutions in 3D printing you will know that the technology is going there. So I think that 3D printing will take major part in fashion," Tsarfati, who leads the company's 3D printing group, told Reuters.
International fashion bloggers who tried on Peleg's outfits during a conference hosted by Autodesk Israel, gave the collection the thumbs-up.
"I really really like it, it's something new like you know the technology is in all the fashion, now it's about technology so it's something new and I really love it," said a Russian fashion blogger, Ola Slova, who is part of an international group taking part in a project supported by "Stand With Us Israel fellowship", a non-profit organisation.
Members of the visiting group who attended the conference at Autodesk's offices in Tel Aviv, examined and tried on Peleg's clothing before listening to her talk about her collection.
To date Peleg says 3D home printed fashion is still a costly, somewhat non-practical operation. But the young designer envisages that in the future, when home printers, which in Israel cost around $2,570, become faster and cheaper, 3D home printing fashion will be made more accessible and popular.
"It's like the music industry, just a few years ago we would go to a store and buy a record and now we can just download the music we like and I feel it might happen with the fashion industry as well. We might be able to download the t-shirt we like, just in a click of a button and print it at home," she said.
Peleg dreams of opening an online boutique that will be based only on files and allow people to download her designs and print their own clothing wherever they go.