Musketeer is a cellular safety application based on the premise that help is most efficient and effective when it comes to those in need quickly. 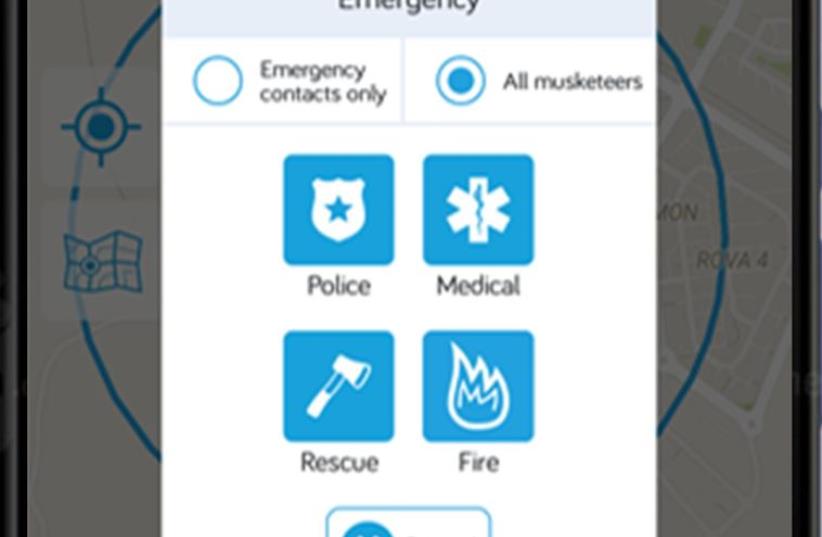 Musketeer app
(photo credit: Courtesy)
Advertisement
“I never thought that pressing the help button would cause such a commotion,” said Avner Reich, who recently received life-saving help via social safety application Musketeer.Reich pressed the help button on his cellphone application upon recognizing the signs of an impending heart attack and, within minutes, several neighbors arrived at his home, among them two doctors. The neighbors called an ambulance and Reich was rushed to the Carmel Medical Center in Haifa where he underwent a catheterization.Musketeer is a cellular safety application based on the premise that help is most efficient and effective when it comes to those in need quickly. Founded in 2012 by Shaul Avidov, the application aims to make society safer by enabling peer-to-peer support at all times.The application allows people in distress to press a help button that sends an alert to the 40 users closest to the emergency call, as well as to a pre-defined contact list the user enters upon registration.Once the help button has been pressed, the application also functions to alert emergency services of the exact location of the user via GPS location, enabling responders to locate the user.The application can be effectively utilized by any member of the community, targeting those who might be affected by isolation, such as the elderly, or children and teenagers staying home over the summer.“I heard about the application on an interview on the radio a while back,” Reich said, “and thought to myself that this is a good to have, why not download it. If it does no good, it certainly won’t do any harm.“When I felt the chest pains I remembered that day and thought to myself, ‘let’s see what good this application is.’ Less than five minutes after the alert, my house was full of neighbors. I was almost sorry to have alerted them all.”Founder Avidov said that “We have reimagined the way technology can be used to help people in need, and this translates into our philosophy of resilient communities with Musketeers helping each other anywhere, anytime.”While the application is currently only available in Israel, users traveling overseas will be automatically directed to local emergency services should an emergency arise, and a launch in the United States is scheduled for the end of 2015.The application is available on both Apple and Android operating systems.