It will take an orbiting cluster of 60 miniature, or nano, satellites, each about the size of a shoe box, to provide full coverage of the planet including air, sea and land. 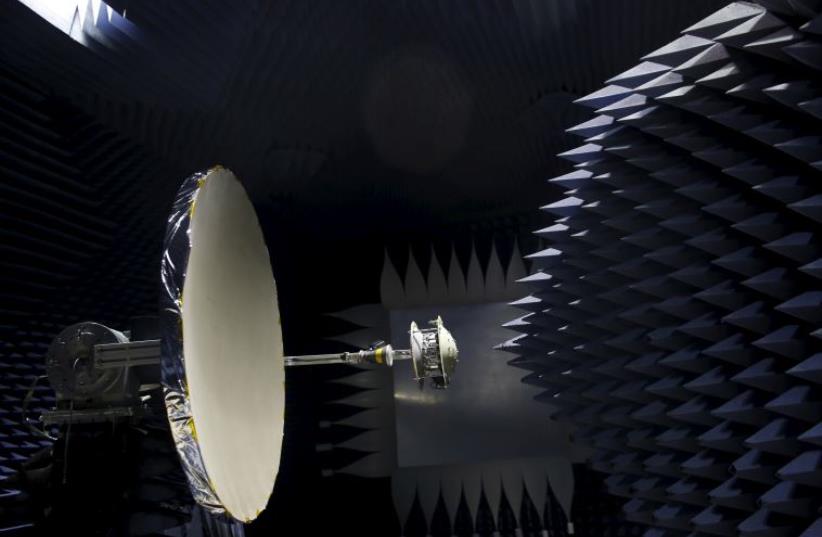 An anechoic chamber where Israeli startup Skyfi are testing their development, the first self-correcting antenna that can turn mini-satellites into powerful transmitters covering the globe to provide worldwide internet access, is seen in Rosh Ha'ayin, near Tel Aviv, Israel
(photo credit: REUTERS)
Advertisement
Israeli start-up Skyfi is looking to outflank Facebook and Google in a race to provide world-wide internet access by developing the first self-correcting antenna that can turn mini-satellites into powerful transmitters covering the globe.The two technology giants are working on ways to beam internet access from the sky to remote areas - Google with high-flying balloons and Facebook with a combination of drones and larger, more complex satellites.But it will take an orbiting cluster of 60 miniature, or nano, satellites, each about the size of a shoe box, to provide full coverage of earth, said Raz Itzhaki Tamir, a veteran of Israel's aerospace industry who started Skyfi four years ago."About 3 billion people on earth do not have access to the Internet. We are going to service all of them because our constellation using our technology will cover the entire planet, both air, sea and land," said Tamir as he demonstrated the system with a large version of the antenna in a 50-square-metre echo-less chamber that simulates the conditions of space."We are going to launch 60 satellites and this will cover the entire planet," he added.The way he hopes to do it is by using a parachute-like antenna that deploys once in space. The antenna can then mechanically adjust itself for the imperfections in the transmitter's own surface, allowing a stronger signal to pass, and even alter the direction it points should broadcast needs change.That may not sound like much, but those are two major hurdles that have limited satellite operators for years."Currently satellites cannot correct errors while in space so if an antenna is not perfect then you have to live with it, with the losses. We can fix while in space and this fixing capability gives you both the ability to maintain the efficiency of the antenna and to adjust the footprint to places that other satellites do not have access to. Or if you launch a satellite with a rigid antenna then you have a fixed coverage of earth. Now we can change that and be flexible, thus gaining more revenue from the satellites eventually," said Tamir.Skyfi raised $3 million from Jerusalem Venture Partners, one of the country's most successful venture capital funds, and says it has already signed letters of intent to sell its antennas to global players like Lockheed Martin and satellite operator Spacecom."Satellites are very expensive, it costs tens to hundreds of millions of dollars to launch a regular satellite. Using our technology onboard of small and nano-satellites, we're able to make satellites very cost effective, very affordable and yet have the performance of much larger satellites. For example, for nano-satellites we can transmit 500 times more than a regular nano-satellite," added Tamir.Thousands of new satellites will be launched into space in the coming years, and many of them will use technology from Israel, which has built on its military expertise to capture a sizeable chunk of the growing commercial space market, particularly in the field of miniaturization."They are going to plan to launch 6,000 satellites in the next five years, up to date about 3,000 have been launched in 50 years so the whole market of satellites is changing, including communications, and we want to be part of that," said Daniel Rockberger, Co-Founder and Chief Operating Officer of Skyfi.While the company says it has a working "proof of concept", the technology has yet to be proven in space.