Ford’s system is designed to simply provide a second screen to Android or iOS apps and focuses on interaction methods that are more appropriate for the car. 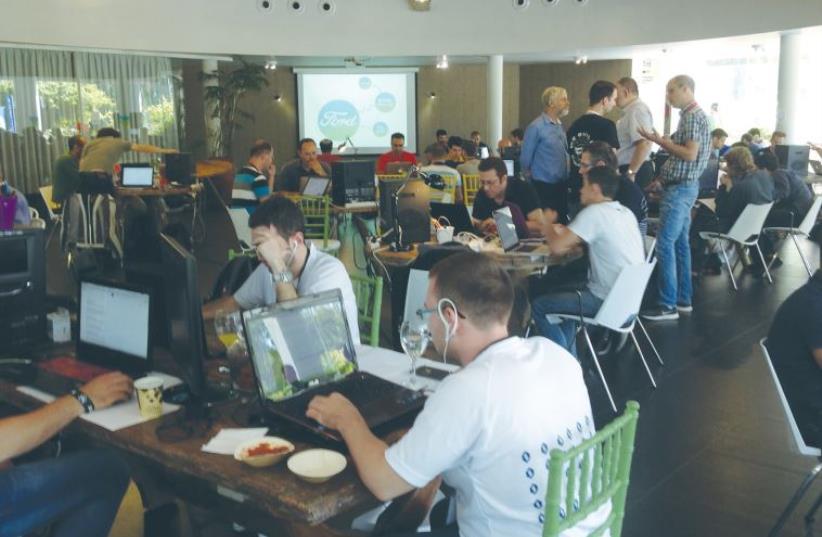 DEVELOPERS PROGRAM at Ford’s hackathon in Tel Aviv yesterday. The winner of Ford’s first hackathon will drive off in a new car, but many of the participants will leave with advanced ideas for apps, services or features compatible with Ford’s SYNC AppLink system, which can load up specially formatted
(photo credit: NIV ELIS)
Advertisement
In two separate rooms overlooking the Yarkon River in Tel Aviv, teams of Israeli programmers and thinkers worked all day Sunday and through the night to dream up ways that apps could change driving.The winner of Ford’s first hackathon, co-sponsored by Axis Innovation, will drive off in a new car, but many of the participants will leave with advanced ideas for apps, services or features compatible with Ford’s SYNC AppLink system, which can load up specially formatted mobile apps for optimized use in the car.“We are looking for people to make their apps and experiences ‘drivables,’” said Scott Lyons of Ford Europe’s connected vehicles and services section. The term drivables is the vehicular equivalent of wearables, which refers to devices such as smart watches that are worn, he said.Ford’s system is designed to simply provide a second screen to Android or iOS apps and focuses on interaction methods that are more appropriate for the car, such as speech recognition or the use of steering- wheel buttons. To ensure that they don’t create visual distractions for drivers, who should keep their eyes on the road, developers are advised to imagine the users are blind and figure out alternative solutions.The Tel Aviv version of the hackathon was the first to introduce an “envisioners” group to develop new ideas without the burden of having to write the code, alongside the traditional “adapters” group, which programs a rough version of their app.The “adapter” programmers consisted largely of start-ups or apps that already exist but needed to be adapted to the Ford system. Adapting Full- Tank, for example, helps those low on gas to find the bestpriced gasoline in their area.It was fairly straightforward.Journey Tel Aviv, an app that suggest good places to eat or pass the time, needed more thought as to how users would sort through various suggestions on the go.Another app, TripZPlanner, hoped to be the next Waze. Its developers, David Waldman and Moshe Mann, said it uses historical traffic patterns and context to figure out where traffic jams will be during a trip, not just where it is at the moment. When there’s a big sports event, for example, the app would be able to predict that certain routes would clog up, even before the traffic begins.The “envisioners” room included groups that were just getting started in mapping out their ideas.Noa Tenny Design, a design studio, was laying out plans for an app that would help families plan road trips, estimating how much time to allot for certain attractions and offering fun facts about sites passed along the way.Pilmark, a business intelligence company, was hammering out an app to help new drivers learn the ropes or foreign drivers adapt to local driving rules.Lyons said coming to Israel, where it has two scouts regularly looking for the latest tech, was a straightforward decision “Israel is clearly a market that has a lot of innovation, with a lot of people who are developing for a global market,” he said. “We felt that if we’re looking for really innovative markets, then this is a perfect place to come for that.”But it is clear that the connected car faces challenges.One issue is privacy and data security. Ford maneuvers around the issue by requiring users to opt-in before sending certain types of data. But it is still hammering out rules on transparency. Its current system largely leaves the problem in the hands of the app developers and phone manufacturers.“It’s a read-only relationship,” Lyons said. “The system is just a reading display for the app, unless you opt in for the vehicle data.”The trouble, added Jim Buczkowski, Ford’s technical fellow and director focusing on electronics and electronic research, is that the extra data is necessary to bring out the potential in the user experience.“We’ve probably reached a limit on experiences that we can create that are valuable to you without knowing more about you,” he said. “But it’s always going to be opt-in.We’re not going to force you.”Buczkowski said Ford is also examining what new sources of inputs will be important in the future. For example, will a camera that can help figure out if a driver is getting drowsy be on the way? Are there forms of touch feedback that can be added to the steering wheel? Is there a way to project images on the windshield that won’t distract drivers? Ford is also working on autonomous cars, he said, but it is focusing on how to make them affordable.Buczkowski predicted that in five years or so, some sort of autonomous vehicle will already be common, though perhaps in very specific use cases.“There’s a lot of work to do yet, though,” he added.