Peekaboo, which took home a $10,000 prize, addresses a problem in collecting urine from infants. 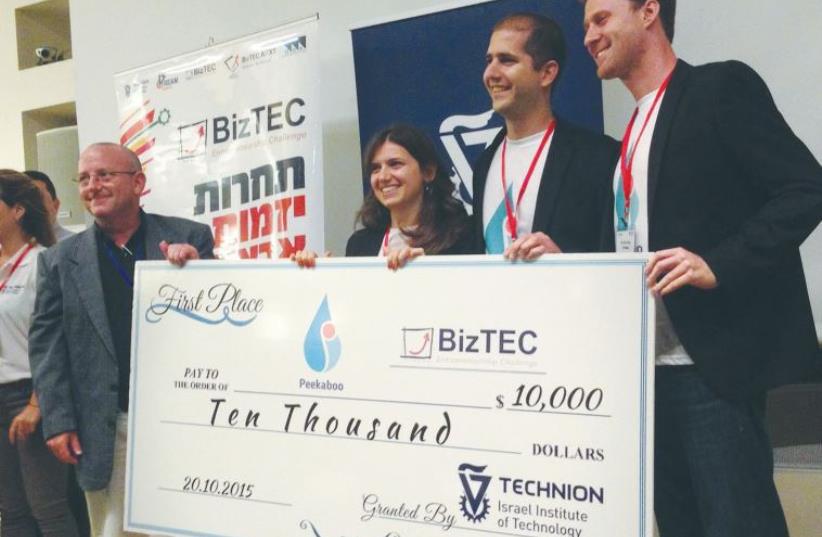 PEEKABOO’S FOUNDERS accept a $10,000 check for first prize at the BizTEC accelerator competition at the Microsoft R&D center in Herzliya yesterday.
(photo credit: NIV ELIS)
Advertisement
Peekaboo, a medical start-up that invented a noninvasive way to collect urine samples from infants, took the top prize from the Technion-run accelerator Biz- TEC on Tuesday.Established in 2004 at the Technion, BizTEC is a nonprofit, yearlong annual national competition that helps students and alumni promote their ventures. The 11 companies competing for Tuesday’s top prize spent the summer at BizTEC’s accelerator, a program that catalyzes academic-based, early-stage venture-capital projects from a variety of technological fields and disciplines.The 11 companies were handpicked from an initial group of 80 applicants, 30 of which were put through a three-month a mentorship program before the final batch was selected for the summer accelerator. The 120 graduates of the program have raised more than $100 million over the past decade.“The start-up creativity well is not running dry. It will never run dry,” Technion Prof. Emeritus Shlomo Maital said at the closing event at the Microsoft R&D center in Herzliya.Peekaboo, which took home a $10,000 prize, addresses a problem in collecting urine from infants.Current noninvasive methods often result in contaminated samples, leading to an 85-percent rate of false positives in collection, CEO Anna Tannenbaum said.The second-place prize went to DeepSense, a system that maximizes industrial uptime for machines. Third place went to SelfLift, a sustainable waterpump system that targets smallholder farms in developing countries.Other notable start-ups included NG Needle, which adds sensors to needles that could help doctors increase precision by letting them “see” the tissues they are injecting; InVivo, which makes electronic sportswear aimed at preventing injury; and Wiztags, which lets shoppers find the precise item in the store using already existing RFID tags.This year’s program received funding from the Yigal Arnon & Co. and Patent Dr. Eyal Bressler & Co. law firms. Bank Hapoalim plans to join as a sponsor going forward.
Bank Hapoalim’s commitment

Our commitment to addressing this new opportunity is unparalleled, resulting in Bank Hapoalim reimagining the bank. As part of this reimagining, we are focusing on new user behaviors that are noticed. As examples, the media is social in context, and mobile devices have driven that sociability. Users are digitally verbose and digitally active. With searches and social channels they are well informed. Sharing has opened transparency at new levels of discussion. Users are smarter and less tolerant of mistakes. Loyalties can shift. Consumers will increasingly demand an experience that is relevant to their needs, anytime and anywhere.Bank Hapoalim sees these changes as opportunities. Adopting the principle that “You don’t build it for them, but instead you build it with them,” the bank’s efforts are resulting in extensive partnering and investing efforts with new hi-tech and Fin-Tech start-ups that represent the voice of this new generation, all helping form the bank’s digital journey to provide people and businesses with the best and the most relevant experience that addresses their daily financial needs.Working with the Fin-Tech industry the bank is focusing on how to: • Develop win-win business models with them.• Externalize the bank capabilities, allowing simple and quick integrations with our services.• Open “fast tracks” in the bank’s laboratories to be able to quickly experiment and evaluate a joint solution.• Invest in selected Fin-Tech companies.• Introduce them to relevant business partners.• Service and guide them through their global financial journey starting from preseed, seed, round A, initial revenue and finally through their revenue growth.Just this year alone we have met close to 1000 start-ups in eight different centers in Israel and in New York City, and close to half of them are now being serviced by us.We are in an amazing time with amazing opportunities. It is important to note that the race is not about which bank adopts the Apple Watch or the next gadget first. The race is about combining innovation with solid business models to win the customer.The writer is CTO of Bank Hapoalim.
Advertisement
Subscribe for our daily newsletter