During the meeting, the premier touted Israel’s robust hi-tech and cyber industries, saying that growth in these areas was “a national challenge.” 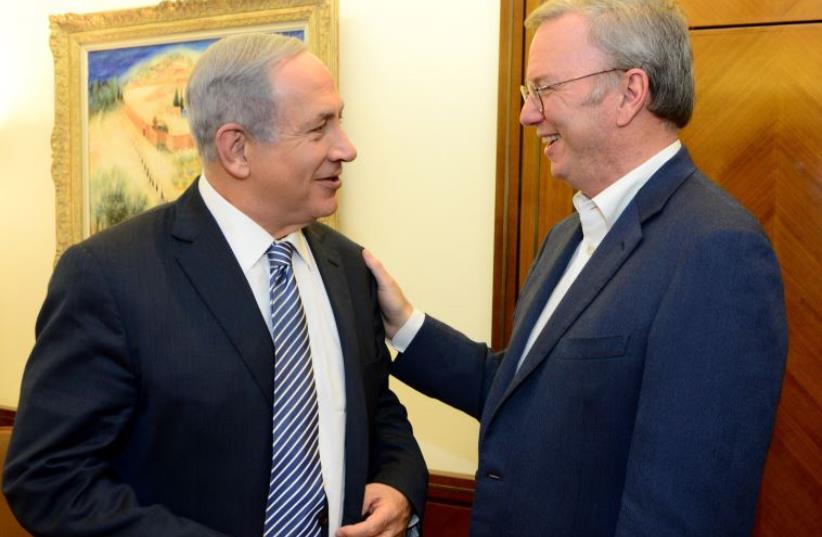 PM Benjamin Netanyahu meets with Google executive chairman Eric Schmidt.
(photo credit: KOBI GIDEON/GPO)
Advertisement
Prime Minister Benjamin Netanyahu met with Eric Schmidt, the executive chairman of search engine giant Google, in Jerusalem on Tuesday afternoon.During the meeting, the premier touted Israel’s robust hi-tech and cyber industries, saying that growth in these areas was “a national challenge.”Netanyahu also noted that Israel was making great efforts to diversify the markets with which it is trading in the technological field.The prime minister said that Israel placed great emphasis on inculcating mathematics studies in high school. Netanyahu also told Schmidt that Israel would work to attract more investments from multinational companies.Schmidt, in turn, praised Israel’s leading position in hi-tech pioneering, particularly in the field of cyber technology. The Google executive hailed Israel’s ability to quickly adapt to new innovations as well as its demonstration of creativity and entrepreneurship in the global marketplace.Schmidt noted that Israel was second only to Silicon Valley in the number of start-up companies. In the last decade, over 6,000 Israeli hi-tech companies were established.The Google chief noted that Israel was a leading player in technology and that there was an overall commitment to continue investments in the country.