Jan Koum, co-founder of popular social networking app, tunes in to the discussion on the global movement to boycott Israel. 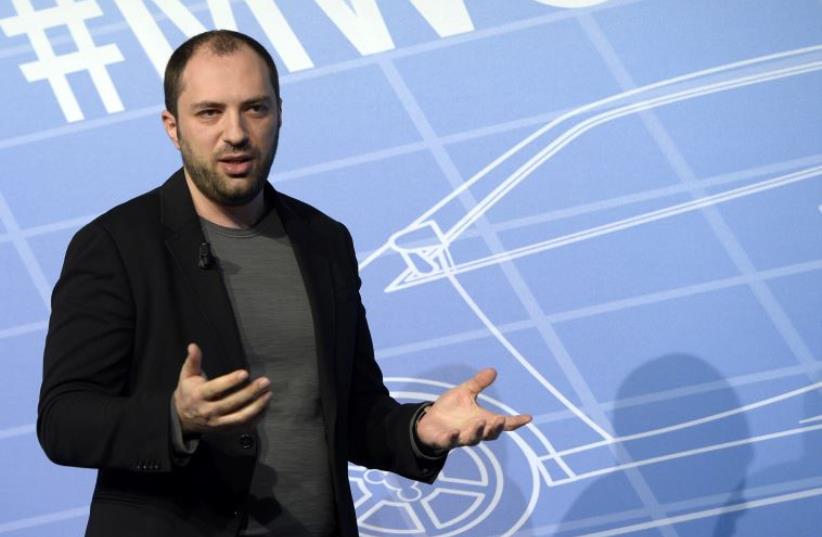 Whatsapp co-founder and CEO Jan Koum
(photo credit: LLUIS GENE/AFP)
Advertisement
Pro-Israel activists celebrated last week what they saw as a positive step in the fight against the global Boycott, Divestment and Sanctions (BDS) movement targeting Israel.
Social media was abuzz after Jan Koum, the co-founder of the popular messaging platform WhatsApp, commented Thursday on a Facebook post by pro-Israel advocacy group StandWithUs, which attempted to demonstrate the "foolishness" of the BDS campaign.
The StandWithUs post included a photograph taken on Britain's renowned University of Oxford campus of an Apple laptop computer laden with pro-Palestinian and "Boycott Israeli Goods" stickers. On top of the computer a hand-written note is seen with a message pointing out Apple's use of certain Israeli technology.
"Hi there! Just thought you should know the flash-storage inside this computer was designed and built by Anobit, an Israeli technology company! If you don't want it any more, please pass it to the desk behind you," reads the letter.

From University of Oxford: Boycott Israel stickers on Israeli made technology - only a BDS supporter would be so foolish.

Posted by StandWithUs on Thursday, November 5, 2015

In January 2012, Apple announced that it had acquired the Herzliya-based Anobit Technologies.
On Thursday's post, StandWithUs captioned the photograph "From University of Oxford: Boycott Israel stickers on Israeli made technology - only a BDS supporter would be so foolish."
While the post racked up more than 12,000 'likes' from online supporters, it also garnered a brief yet notable comment from the WhatsApp founder, reading "priceless."
For the pro-Israel NGO, the response from Koum, who is Jewish, signaled the far-reaching impact of online activism.
"It's great that we were able to reach these people and they're willing to come out and make a statement - these days a statement can be a [Facebook] like, a share or a comment," StandWithUs Israel Executive-Director Michael Dickson told The Jerusalem Post on Monday.
"In the case of the WhatsApp founder, he's basically making a statement against BDS," he added. "Sometimes one word is all it takes."
Dickson explained that his organization received the photograph, which was originally taken in 2013, from a friend of the photographer's and first uploaded it to social media last November.
He further told the Post that StandWithUs decided to re-post the photograph a year later as the issue of BDS "is still so relevant and still so potent."In October, a group of more than 300 scholars in the United Kingdom called for their peers to boycott Israeli academic institutions. Earlier in the year, Britain's National Union of Students passed a resolution in favor of joining the BDS movement.
Advertisement
Subscribe for our daily newsletter