Stories yield results: A look into the BOMAH strategy

“There was a common problem in Sderot and California: People weren’t telling their story, or they were telling the same story that was said 20 years ago." 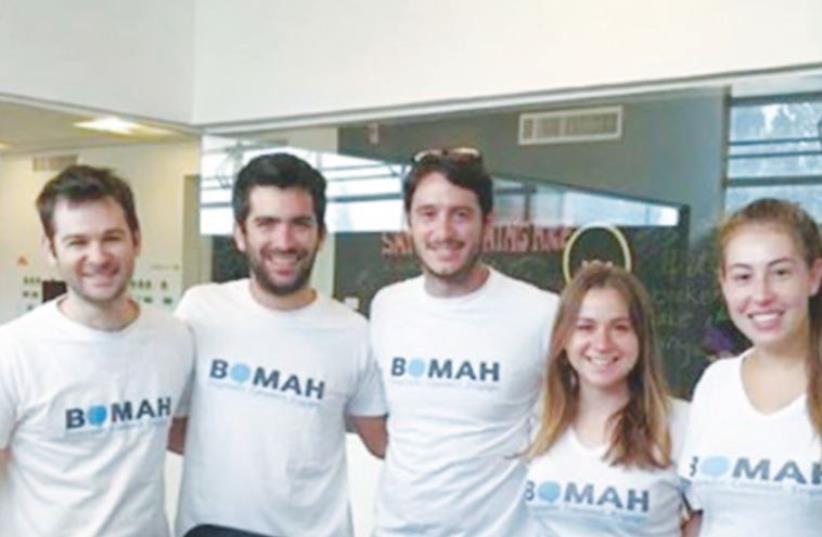 STAFF MEMBERS at BOMAH provide various services, including social-media management, interactive workshops and content creation, utilizing the art of storytelling to achieve results.
(photo credit: COURTESY BOMAH)
Advertisement
Amid the bombardment of Hamas rockets in 2006, Itzik Yarkoni continued his studies at Sapir College in Sderot. But rather than become discouraged, he turned adversity into opportunity.In 2013, the 33-year-old Israeli entrepreneur founded the tech startup company the Brand of Milk and Honey (BOMAH) – a social-media consulting agency servicing startups and nonprofit organizations. Guided by their four-pronged strategy, Yarkoni and his Jerusalem-based staff utilize the art of storytelling to achieve results.“We have a method that comes from the field, not from the academic world,” Yarkoni says. “It’s all about empowering people to share their story in an effective way.”With a degree in communications and media studies, Yarkoni cofounded the Sderot Media Center in 2006 and served as the director of communications until 2009.His thirst for challenges encouraged him to apply as an Israel Fellow at the University of California in Irvine the following year.Yarkoni encountered blatant anti-Semitism and fierce anti-Israel sentiment while residing in “The Golden State.” To counter the arguments presented by Students for Justice in Palestine and the Boycott, Divestment and Sanctions movement, he coached Israel advocates on how to share their experiences and build strong, supportive communities via social media.“There was a common problem in Sderot and California: People weren’t telling their story, or they were telling the same story that was said 20 years ago,” Yarkoni says. “There needed to be a change in the Jewish world.”And that is where the BOMAH ideology generates from.With more than 50 clients in Israel and the United States combined, BOMAH provides various services, including social-media management, interactive workshops and content creation. However, the relationship it has with its clients is not strictly work related.“They’re our friends,” Yarkoni says. “We eat shakshuka with them and answer phone calls at 1 a.m.But it’s more than that: It’s about building trust.”Startup company founders attribute the 90-percent fail rate to factors such as insufficient capital and superior competition, according to a study by Allmand Law. However, Yarkoni says there is another flaw that goes unmentioned: not utilizing storytelling as a promotional tool.“They tell what they do and how they do it, but not why,” he says.“People don’t know how to tell their story, and that’s the challenge.”In a situation where a client denies the assistance of BOMAH, Yarkoni strives to uncover if it is because of poor timing, a lack of funds or simply his personal approach.“It’s the Israeli mentality to never take no for an answer,” he says. “When people say no to our services, I never take it personally.I just want to understand why, in order to see if I can help.”His sentiment reflects the fourth component of the BOMAH strategy: Yalla. Yarkoni uses this colloquial Arabic word, which means “let’s go,” to describe his staff’s dedication to overcome obstacles and make a difference.BOMAH has the chutzpah to be upfront about a company’s effectiveness, detailing both its strengths and weaknesses. And clients greatly appreciate it, especially those living in America.However, BOMAH’s impact stretches far beyond the corporate world. Yarkoni is teaching his tactics to the younger generation, with classes at Bar-Ilan University and interactive workshops at more than 20 college campuses. He and his employees have traveled and trained 7,000 students thus far.From constructing resumes to sharing personal stories about Eretz Yisrael, BOMAH teaches students how “building their online brand” can turn the heads of potential employers, university professors and typical college students.“People want to hire people, not robots,” says Arielle Channin, a sophomore and marketing major at Adelphi University in Long Island. “Itzik showed me how to portray myself in a light that employers will be attracted to.”Others are implementing the BOMAH strategy on a larger scale.“Personal stories are untouchable,” says Fay Goldstein, the regional adviser of Hasbara Fellowships on the US east coast. “Itzik Yarkoni and BOMAH have taught me the power of my narrative and the effectiveness of sharing it through social media.”As an organization geared toward helping students become powerful pro-Israel activists, Hasbara Fellowships employs the BOMAH philosophy on a daily basis.“Our team has used this directive to train and empower students to share their personal story,” Goldstein says. “Israel detractors can’t disregard someone’s personal story and connection to Israel.”With the launch of BOMAH’s new website and a growing list of clients, Yarkoni is excited to continue teaching his strategy in Israel and abroad.“We’re not doing marketing; we’re telling stories,” he says. “We want people to use our platform to make a difference and not be afraid to do it.”