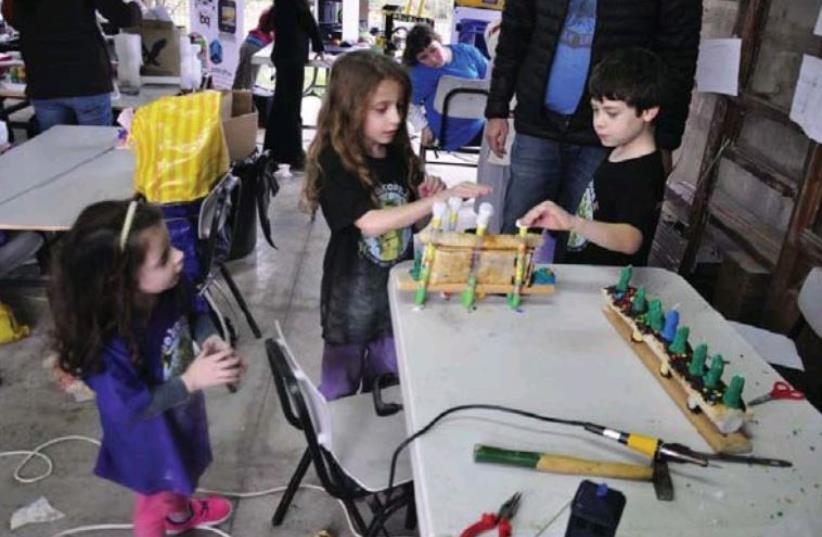 THE ANNUAL GeekCon Kids gathering
(photo credit: GEEKCON)
Advertisement
Tired of seeing your kids sitting in front of the computer or TV day and night? Has the PlayStation become your child’s best friend? is a daylong festival dedicated to using tech to develop new and innovative ideas. The annual GeekCon Kids gathering encourages kids to create innovative projects in areas such as mobile software, robotics, avionics and mechanics. Now in its fourth year, GeekCon Kids will take place on December 11 from 9 a.m. to 3 p.m. at the Herzliya Museum of Contemporary Art. For those of you who register ahead, the cost is NIS 61 and NIS 90 a week before the event. Advance registration is required.GeekCon Kids challenges its young participants (and their parents) to cope with a variety of technologies as they construct robots or machines (that are not necessarily useful) in as short a time as possible. Projects typically integrate robotics, computers, arts and crafts, software and 3-D printing. In previous years, kids built child robots, surfboards made out of water bottles, a hanukkia made out of confetti and air, an edible hanukkia, a fire-spitting dragon and a box that can move on its own.The original Israeli GeekCon movement began operating 11 years ago. The nonprofit organization functions solely due to the dedication and hard work of volunteers. It is 100 percent dedicated to the promotion of creative and innovative “outside of the box” activity and holds five events throughout the year, including GeekCon Kids.“A big part of our job here at GeekCon Kids is to help the younger generation grow up to become artists and entrepreneurs who work in technological fields,” said Adi Av, a GeekCon cofounder who is also a software developer.Gilli Cegla, one of the event’s organizers, said: “GeekCon Kids is part of the GeekCon tradition for the next generations and will hopefully become a tradition of its own. It’s our way of promoting hands-on innovation, creativity and technological entrepreneurship with the future generations. We hope those kids will become the future entrepreneurs, so Israel remains the startup nation in the future as well.”Israeli advertising goes East A delegation of Israeli technology companies that provide solutions for the advertising sector left last week for Japan and South Korea to meet with large advertising agencies that are preparing for the future and can deal with sizable and innovative accounts. In South Korea, the Israeli delegation will meet with Cheil Worldwide, a marketing company that is part of Samsung and deals with shopper, sports and digital marketing; and with Innocean Worldwide, an advertising affiliate of Hyundai Motor.The digital advertising market is estimated to be $9.7 billion in Japan and $3b. in South Korea, and both markets are expected to grow considerably in the next few years.The Israeli delegation that set out to Japan and South Korea to present advanced solutions for digital advertising includes: ironSource, SimilarWeb, Datorama, AppsFlyer, Show Box and GeoEdge.“The digital advertising market in South Korea is estimated at $3b. and is currently growing at an annual rate of 13 percent,” said Shay Feiler, the head of the Israeli Embassy’s economic and trade mission in South Korea. “The presence of a mobile-telephone network with an extremely high penetration of smartphones makes South Korea a paradise for digital advertising, especially in the mobile sector. We will be making a number of decisions regarding our domestic campaigns in Japan and South Korea, as well as discussing global campaigns.”Noa Asher, the head of the Israeli Embassy’s economic and trade mission in Japan, said: “In Japan, the Israeli representatives will rush from appointment to appointment as they meet with some of the largest Japanese advertising agencies, such as Hakuhodo, Yahoo Japan, e-commerce giant Rakuten, OPT and Dentsu. The Japanese companies are excited for the opportunity to meet with Israeli companies with revolutionary technology for the advertising market. They view these Israeli innovations as a means of upgrading their products and as an incredible way to invest their money. Japan is considered one of the most advanced markets in the digital-advertising world. The Japanese digital-marketing market is estimated at $9.7b., $4b. of which accounts for the mobile sector alone. This number is expected to double by 2019.”If you run a young startup, have developed an interesting app or have a question, please feel free to contact [email protected] com.Translated by Hannah Hochner.