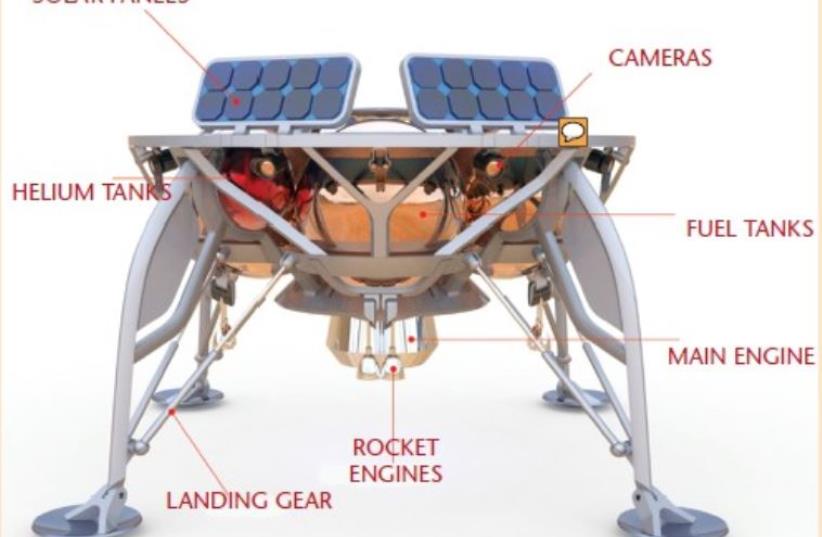 AN ARTIST depicts the possible design for the SpaceIL unmanned lunar craft scheduled for a moon mission in the second half of 2017
(photo credit: Courtesy)
Advertisement
Over 3,000 space industry leaders from around the world are gathering this week in Jerusalem for the 66th annual International Astronautical Congress. The Israel Space Agency is proud to host astronauts and scientists from 60 countries who have convened for a week of intense discussions. And despite the tense security situation in Israel – and in Jerusalem in particular – not even one participant canceled.At the International Convention Center in Jerusalem, Science, Technology and Science Minister Ophir Akunis welcomed the guests, saying, “This is a vote of confidence in the State of Israel and a genuine gesture of appreciation for Israeli science. The fact that the International Astronautical Congress chose to convene the conference in Israel is a tribute to Israeli science and its position as a trailblazer in the field. The State of Israel is perhaps ‘only’ 68 years old, but it stands in the front row of global entrepreneurship and innovation. I’m so glad that Israel was given this opportunity to host the annual IAC conference and that all our guests will be able to see the beauty of our country and become acquainted with Israeli science and technology up close.”Attending the annual IAC were delegations from NASA (National Aeronautics and Space Administration), the European Space Agency and space agencies from China, Russia, Japan, France, Italy, Germany, Canada, the UK, the Czech Republic, Denmark and Kazakhstan.The NASA delegation was 50 strong, such as NASA administrator Charles Bolden, deputy administrator Dava Newman, International Space Station program scientist Julie Robinson, NASA Orion program manager Mark Geyer and five astronauts, including Canadian Chris Hadfield and American Sunita Williams who holds the record for total spacewalks by a woman (seven). Also attending the conference were well known individuals in the space industry, such as Buzz Aldrin, who was the second person to walk on the Moon.The conference was held in a 1600- sq.m. hall with more than 100 booths, including Lockheed Martin, Airbus Defense and Space, Rafael Advanced Defense Systems, Elop, Israel Aerospace Industries, the Italian Space Agency and a number of start-ups in the space industry.SpaceIL secures ticket to moon SpaceIL, a nonprofit organization working to land the first Israeli spacecraft on the moon, is the first (and so far only) Google Lunar XPRIZE team to secure a “ticket to the moon” on a SpaceX Falcon 9 Launcher.“Only three countries have ‘soft-landed’ a rover on the surface of the moon: the United States, the former Soviet Union and China. Now the notion of the small State of Israel being added to this exclusive list looks more promising than ever,” said SpaceIL CEO Eran Privman.This means that as of now, SpaceIL is the leader in the international race to land an unmanned spacecraft on the moon and is the group with the best chances of winning the competition.It should be noted that 33 private companies from around the world applied, but only 15 were picked to compete.At a press conference held last week at the President’s Residence in Jerusalem, President Reuven Rivlin and Science Minister Ophir Akunis announced that the Israeli team has been picked to join SpaceX, run and owned by founder Elon Musk, on its rocket launch that is scheduled for the second half of 2017.SpaceIL recently signed a $10 million launch agreement that was made possible by contributions from two major donors: the Dr. Miriam and Sheldon G.Adelson Family Foundation and Morris Kahn’s Kahn Foundation.

Medical school in Galilee enters fifth year Almost 600 medical students will resume their studies next week at the Bar-Ilan University Faculty of Medicine in the Galilee. The first class of 53 students who began their medical studies in the program in October 2011 are working in internships in hospitals around the country. This year, more than 590 students are enrolled. Approximately 490 of them are enrolled in two unique programs.The first is a three-year course for students who’ve successfully completed three years of pre-clinical medical studies abroad, and the second is a four-year program that is open to students who’ve completed a science-related bachelor’s degree.The Bar-Ilan University Faculty of Medicine has 112 senior faculty members and 110 clinical instructors. Medical students perform their clinical training in any of five hospitals located in northern Israel: Ziv Medical Center in Safed, Poriya Hospital near Tiberias, Western Galilee Hospital in Nahariya and two hospitals in Nazareth, as well as in community clinics in the North and the Galilee.In addition, at the university there are 93 students registered in graduate and doctoral programs, as well as 10 in post-doctoral studies. Students with excellent scores are encouraged to join a unique MD-PhD program.Wix.com just got even cooler Wix.com is an Israeli company that enables you to create fully customizable, totally original templates with its easy drag-and-drop website builder.The popular website building and hosting service announced the launching of its new editor, which includes a unique user interface, intuitive functionality, an advanced design and hundreds of ready-to-use components. The editor offers users a fun new visual experience and simplifies their learning as they prepare impressive, professional- looking business websites.If you run a young start-up, have developed an interesting app or have a question, please feel free to contact info@social-wisdom.com.Translated by Hannah Hochner
Advertisement
Subscribe for our daily newsletter