The game has been downloaded by gamers in more than 200 countries, and is a leading name in more than 50 of them. 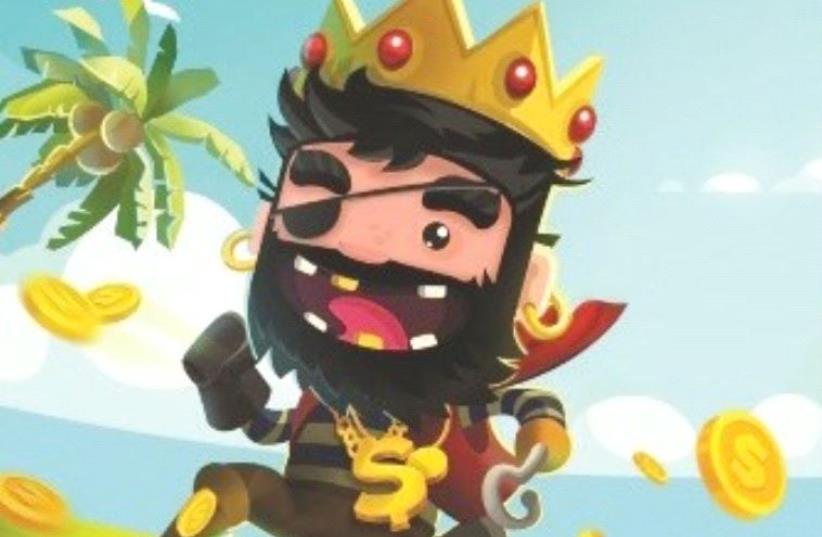 PIRATE KINGS continues to attract players around the world and has passed 70 million downloads.
(photo credit: COURTESY OF JELLY BUTTON GAMES)
Pirate Kings, a mobile game created by Israeli Jelly Button Games, recently passed the 70 million download threshold.The game has been downloaded by gamers in more than 200 countries, and is a leading name in more than 50 of them.Jelly Button Games uses its pirate characters to create competition between players as they conquer exotic islands, search for treasures, and seek revenge on competitors. You can advance quickly advance by purchasing virtual coins, and players in Qatar, United Arab Emirates, and Kuwait pay the highest amounts on average. More than 60 percent of the game’s players are located in the US, UK, Thailand, Vietnam and Malaysia.“We attribute Pirate Kings’s success to our intense investment in the game’s aesthetics and its high level of design, which provides players with an unusually quality game experience,” says cofounder Alon Lev.“This makes people want to come back and play more. In addition, we developed a unique attribute called Mingle Play, which lets you play against friends or other players without them having to be online in real time. This resolves the problem of long waits until the other side responds.”Jelly Button Games was founded in 2011 by five partners: Moti Novi, Ron Saranga, Ron Rejwan, Mor Shani, and Alon Lev. Pirate Kings was launched in 2013. The company currently employs 80 people in its South Tel Aviv offices, and is looking to recruit additional staff to fill positions in software development, UNITY and UI/UX designers, analysts, and online marketing.German-Israeli skin cancer research breakthrough

A unique joint research project being carried out by the Science Ministry and DKFZ, the German Cancer Research Center in Heidelberg, recently led to a significant scientific breakthrough regarding the metastatic spread of melanoma (skin cancer).“We are very excited about this additional tribute to Israeli scholarship,” said Science Minister Ophir Akunis.“This type of groundbreaking research puts Israel at the forefront of scientific research worldwide. Under my leadership, the Science Ministry will continue to invest record amounts of money in these types of research programs, which will advance scientific discoveries, and constitute a source of pride for the State of Israel, and help mankind.”This veteran program, in which Israeli and German researches work jointly, takes place alternately, one year in Israel and the next in Germany. Aaron Ciechanover, who received the Nobel Prize for chemistry in 2004, is a graduate of this program. In 2015, both sides increased the amount of funds they are allocating to the program, which pays for six separate studies, each of which lasts three years.The most recent study, which was carried out by Dr. Carmit Levy of Tel Aviv University, and was published in the prestigious scientific journal Cell Biology Nature, offers new, effective methods for diagnosing skin cancer and preventing it from spreading to other organs.

Public NGO Shlomit is searching for volunteers who have experience with Snapchat, Instagram and Facebook accounts, and who would be willing to spend 40 hours a week promoting content on social networks. The position includes making site visits to national service providers throughout Israel – from Kiryat Shmona all the way to Eilat – and meeting with current volunteers.Their job will be to record volunteers’ stories and upload them to the various social networking sites.Young people who choose to join the Shlomit social networking group will receive all the same benefits as other Israelis carrying out their national service: a stipend that is deposited directly into their bank account; a card which allows them free public transportation; and housing. Upon completion of the program, they will receive a grant of NIS 3,720, as well as a stipend of NIS 11,184 that can be used for higher education, opening a business, marriage, or taken in cash after five years. In addition, participants can benefit from one free year of study at an institute of higher education, and a reduced-fee for a psychometric course.“We are creating this special team of social network experts,” says Orna Kotler, CEO of Shlomit, “so that we can open up all the different volunteer tracks available for young people who received exemptions from the army. Most national service volunteers received exemptions from the military due to health reasons, but chose to volunteer in the community in place of the army. And I would like to personally thank each and every one of them for their service.”If you run a young startup, have developed an interesting app or have a question, please feel free to contact [email protected]Translated by Hannah Hochner.
Advertisement