Antisemitism is hostility towards or prejudice against the Jewish people. Since biblical times, Jews experienced periods in which they were persecuted for refusing to adopt the religion and culture of the ruling societies in which they lived. The rise of Christianity and perception of Jews as rejectors of Jesus led to a rise in antisemitism.

Veteran Affairs: Nazis 'don't have a place' next to fallen American heroes

By BENJAMIN WEINTHAL
Antisemitic incidents in Austria increased by 9.5% since 2017

The the perpetrators of these crimes had several different motives, according to the report. However, the majority of crimes were carried out by "right-wing extremists," according to EJC.

One individual also shared an image based on the poster for the movie Jaws showing the shark as Adolf Hitler and changing the word “Jaws” with “Jews.”

Israeli Ambassador to the Czech Republic, Daniel Meron, wrote on Twitter that he was "shocked and disgusted by such a calendar."

The graffiti was discovered Tuesday on a bench outside Shir Tikvah Congregation. Across the street, “Seig Heil, Heil Hitler, Trump 2020” was written on a traffic utility case.

“It is particularly troubling that VA’s refusal to replace these offensive headstones comes at a time when documented antisemitic incidents in the United States have reached a new high.”

Lazar said, “I will speak to the Russian government, and ask that they ask urge the Iranian authorities to mend the tomb of Esther and Mordechai."

Preliminary data shows many Britons believe Jews created the coronavirus. This is a developing story.

The Austrian news outlet 'Heute' first reported on the anti-Israel stunt that took place Saturday at Viktor Adler Square in the Austrian capital.

In the letter, Sher argued that the museum had “orchestrated and acquiesced in a concerted smear campaign against Warren Kanders,” the law enforcement supplier’s owner, who is Jewish.

Internal Affairs Minister Arsen Avakov announced the suspension in a letter he sent to the head of the Jewish community of Kolomyya, in the country’s west.

The slurs against Sen. Davi Alcolumbre were published this week on the Facebook profile of a user called Jota Junior, which was removed after the comments were made public.

The green on the fourth hole at the Cranbourne Golf Club also was sprayed on Tuesday night with homophobic images.

By HENRY BENJAMIN/JTA
22/05/2020
Antisemitism and religious groups: The blame game

If terrorism were a tree, antisemitism would be its biggest branch. 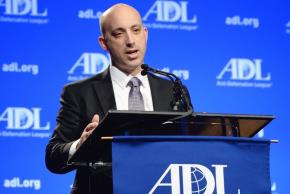 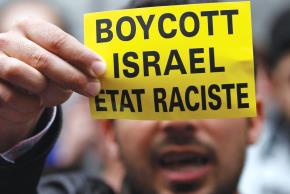 The government did not explain its decision to cancel the seminar, which had provoked international protests by Jewish groups and ACOM, a pro-Israeli organization in Spain.

25 olive trees were planted at a ceremony in southern Israel in memory of Lori Gilbert-Kaye, who was tragically shot and killed in an antisemitic attack just over a year ago.

Antisemitism hit a new all-time high in the US in 2019 and continued on an upward trajectory for the sixth straight year, according to the Anti-Defamation League’s annual report.

'People want to say Hitler was a white supremacist. No. He was fearful of the Jewish nation, and that drove him into some unfathomable atrocities.'

The charred body of Mireille Knoll, 85, was discovered in her apartment on March 23, 2018

The new law also criminalizes the desecration of the EU flag and EU anthem.

The new bill will prohibit Missouri and its associate subdivisions from forming contracts worth over $100,000 with companies that employ more than 10 employees.

Though the video did not remain on Twitch for long, it was captured and shared on other platforms.

Curbing anti-Jewish expression on the Internet by suspending individual posts is about as realistic a proposition as curing corona by donning a surgical mask.

What role did Erich Priebke play? The Pope Pius XII Archives may tell us.

In recent years, commemorations of Nazi collaborators, including state and church officials, have become commonplace in Eastern Europe, where many regard them as patriots who fought Soviet domination

The Danish Bible society took too many liberties with the translation but, Mosaic Magazine's Philologos argued, was not antisemitic in its motives.

The report juxtaposed the use by these ideologically diverse groups of similar antisemitic messages.

“The use of the expression ‘the work sets you free’ attacks the memory of Holocaust victims and offends the sensitivity of the survivors,” said Rabbi Michel Schlesinger

The excavation team is also hopeful of finding other relics such as coins and documents buried in the foundations.

Violent assault against Jews rises by 56%

The tombstones are marked with a swastika inside a German cross, and are inscribed, “He died far from his home for the Führer, people, and fatherland.”

The letter was signed by Myhaylo Bank, a high-ranking officer in the national police force who handles organized crime. The letter did not explain his unit’s particular interest in Kolomyya’s Jews.

King was removed from two House committees in 2019 after he told a New York Times reporter that he wondered why the term “white supremacist” had become offensive.

“We see a lot of conspiracy theories against Jews, especially on social media,”

The event had been scheduled to take place in October of this year, marking 75 years since the end of the second world war, but will now take place in 2021.

The incident is currently being investigated by the local sheriff's department.

In a letter to the mayor, Dr. Shimon Samuels said that there is “a growing pandemic of antisemitic stickers in and around the Gare du Nord and Gare de l’Est area.

In the Halle attack, two people were killed near the synagogue when the alleged gunman could not enter the building.

Spitting on people is illegal and violates France’s emergency measures to curb the COVID-19 pandemic.

The attack was the fifth case of vandalism or intimidation in 2 ½ years. 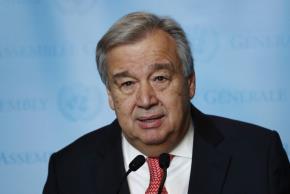 'The pandemic continues to unleash a tsunami of hate and xenophobia, scapegoating and scare-mongering'

‘Blood Libel’ presents a cogent account of the persistence of hate.

Gauland delivered his comment ahead of the 75th anniversary of the end of the war in Europe started by Nazi Germany.

By MARCY OSTER/JTA
07/05/2020
Did Hans Calmeyer send a Jewish woman to Auschwitz?

In 1992, Yad Vashem posthumously recognized Calmeyer, who died in 1972, as a Righteous Among the Nations, Israel’s title for non-Jews who risked their lives to save Jews.

The 2018 motion promoted by the local fraction of the Podemos far-left party on the City Council of Valencia was passed, declaring a boycott of Israel and Valencia an “Israeli apartheid-free zone.” 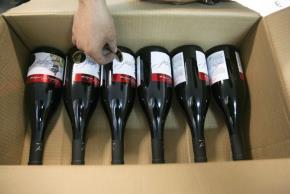 Within Sustainalytics' analyses, companies who operate in Israel are tagged with higher negative controversy ratings. 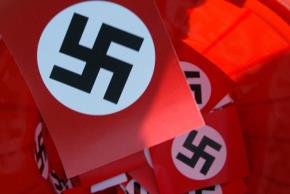 It is another incident of the use of Holocaust imagery and rhetoric to express opposition to coronavirus regulations.

This is not the first time that Amnesty International has faced allegations of being biased.

Mbembe and another academic took the lead to boycott Prof. Shifra Sagy, a psychology professor at Ben-Gurion University, who was disinvited from the South African Stellenbosch University’s conference in 2018.

By BENJAMIN WEINTHAL
06/05/2020
US will push countries to love their Jews more, antisemitism monitor says 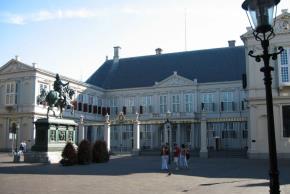 Queen Wilhelmina, whose reign ended in 1962, referenced the persecution of Jews only three times in 48 radio speeches made during her exile in the United Kingdom.

We shouldn’t kid ourselves: Antisemitism is still alive and well. The oldest hatred has persisted so long because it insidiously adapts and adjusts to situations like these.

By JONATHAN A. GREENBLATT
05/05/2020
New Labour leader failing to crack down on antisemitism - UK Jewish groups

Starmer’s vow has quickly been put to the test, and after a controversial call involving two Labour lawmakers, leading British Jewish organizations now say he is failing it.

"Unfortunately, for worldwide governments, the window of time to build a plan to eradicate antisemitism is running out... antisemitic events will escalate and become even more violent and physical."

German commissioner to combat antisemitism tells 'Post': "There is no space for Iran-backed terror in our country'

Khrzhanovsky, who is not Jewish, wants to bring his hyper-realistic cinematic style to the museum and make it, in the words of a former director of the project, a “Holocaust Disneyland.”

The phrase, which translates from German into "work makes you free," is the the same phrase that infamously adorned the gate at the entrance to Auschwitz.

"Mr. Görgen has posted multiple times on his official twitter feed in defense of Achille Mbembe, a Holocaust-minimizer and denier of Israel’s right to exist,“ the organization wrote.

The signatories requested a meeting with the mayor “to discuss constructive approaches to respond to the pandemic.”

The meme uses a well-known portrait of Anne, a Jewish teenage diarist who died in a German Nazi camp in 1945 after spending two years in hiding in Amsterdam with her family

De Blasio was responding to a funeral that had drawn hundreds of Orthodox Jews to the streets of Williamsburg, Brooklyn, to mourn a rabbi who died of the coronavirus.

The attacker told police that he wanted to commit an act of terror having watched videos relating to Gaza and Palestine.

Exclusive: Cooper said that “there must be a price to pay by support of people who want to get rid of Israel” and say it is “worse than apartheid.” Cooper said this is “over the top antisemitism.” 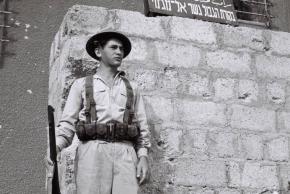 Conflict in the Middle East, 1945-95 has been withdrawn by Hodder after UK Lawyers for Israel found a number of inaccuracies and biases within the text.

A UK Labour party spokesperson said: “The NEC has today agreed the terms of reference for the independent investigation into the circumstances, contents and release of an internal report."

In 2019, according to WZO, a record number of antisemitic events occurred to diaspora Jews.

Iranian regime-sponsored rally attracts neo-Nazis, members of Hezbollah and the Popular Front for the Liberation of Palestine.

Biden’s three-point plan would increase the $90 million the Department of Homeland Security now hands out for securing nonprofit institutions by “multiples.”

“This was not, and should not be treated as, an illegal party,” he told Belga. “This was an essential action out of respect for the resistance fighters, Holocaust victims and family members.”

Schuster criticized Mbembe’s writings which argue that Israel’s interactions with the Palestinians in the context of the Palestinian-Israeli conflict is worse than the Holocaust.

US Democratic Congresswoman Rashida Tlaib, who has faced accusation of antisemitism and is known as a fierce critic of Israel, was strongly criticized for the tweet.

A Massachusetts man was arrested for trying to set off a firebomb near the entrance of a Jewish home for the elderly.

A New York City man has been charged with bias intimidation and harassment following two confrontations with a Jewish man.

It is perhaps not surprising that a fitting museum has not yet been constructed in Babyn Yar, because the story of Babyn Yar has been somewhat neglected for many years

The story of this miracle was related to me by Gisela Rooz, my mother’s oldest sister.

The event was cancelled due to the coronavirus pandemic.

On one building, which appeared to be a small rural outhouse, the words "Jew," "Zion," and "Death" were spray painted in red.

The building, which functions as a synagogue and a JCC, has been closed to most activities due to the coronavirus crisis.

By BENJAMIN WEINTHAL
22/04/2020
Two-thirds of US Jews say they are less safe than a year ago, ADL finds