An Israeli startup called TROPHiT has created a value-driven marketing platform for video games aimed at the cellphone market. 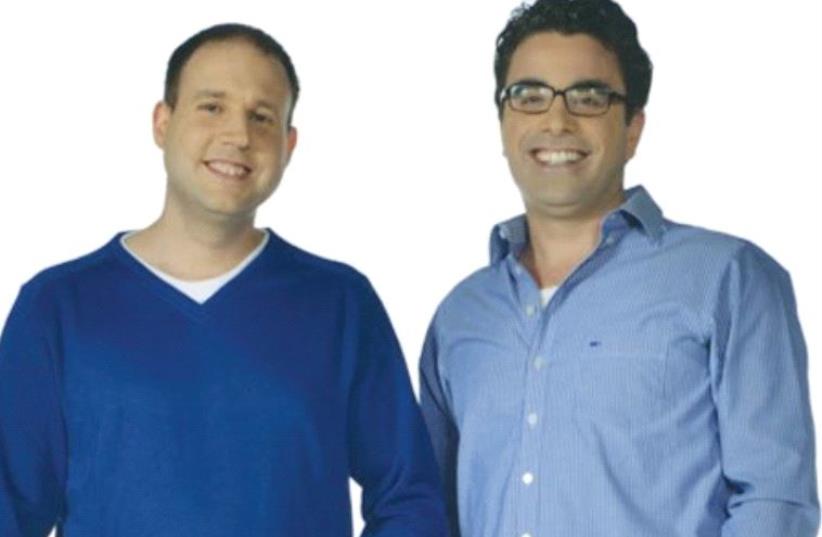 TROPHIT COFOUNDERS Sagi Mann (left) and Guy Hollander have created a value-driven marketing platform for video games aimed at the cellphone market
(photo credit: TROPHIT)
Advertisement
Most video-game developers go bankrupt because they don’t succeed in increasing the number of users significantly and quickly enough. Everyone dreams of developing a successful video game that goes viral like Angry Birds or Fruit Ninja.But there’s no magic formula for creating a winning game.An Israeli startup called TROPHiT has created a value-driven marketing platform for video games aimed at the cellphone market.The company was founded by CEO Guy Hollander and CTO Sagi Mann.TROPHiT’s technology does not require a software development kit (SDK) or any other changes, and it enables video-game companies to use every part of the game – coins, diamonds, steps, hints – to be used as marketing tools called “vouchers.”For the first time, video games can be treated as small marketing tools in and of themselves.In some ways, they can be considered like a store that has items inside that are for sale.For example, according to Mann: “Instead of using a regular online ad that says something like ‘download our soccer game now’ to promote our product, we add a button right inside the game that reads, ‘Receive 200 coins’ in England and ‘Receive bonus level’ in the US. And if a user does push the button to download the game, he receives the extra 200 coins or bonus level immediately.”“In addition, instead of inviting a friend to play through Facebook, if you invite him directly, he’ll receive 50 bonus diamonds,” he said. “A third incentive is players can ‘recycle’ coins they’re not using in the game and in return receive a new sword they can use in a different game altogether.”Video-game producers are well aware that users are much more likely to engage in incentivized installs, for example, to download a game when they are offered virtual items.

TechForGood Impact Network, powered by Le Comptoir de l’Innovation, is the world’s largest network of green and social startups, including 500-plus startups and a €100 million impact investment fund. It is expanding its activities in Israel by partnering with Tech- ForGood and Impact First Investments.Impact Network, a presence in 10 countries through 13 programs, was founded by Le Comptoir de l’Innovation in France in 2010.It has incubation and acceleration programs dedicated to green and social startups worldwide, including Paris, San Francisco, Austin, Hong Kong, Cape Town, Casablanca, Tunis, Santiago, Amsterdam, Brussels and Luxembourg.Since its founding, the ambition has been mobilizing global cross-sector partnerships toward the common vision of recognizing and celebrating excellence in social innovation.Le Comptoir de l’Innovation, through its Impact Network, is uniquely situated to now stepping into the Israeli ecosystem through a partnership with TechForGood and Impact First Investments, two pioneer organizations in the field.TechForGood participants will have the opportunity to tap into Impact Network and learn from like-minded international peers.They will have access to a large range of services available, including Jump Seat programs, which allow entrepreneurs to work from another hub available in the network, and exchanging with mentors and experts to develop their projects.If you run a young startup, have developed an interesting app or have a question, please feel free to contact info@social-wisdom.com.Translated by Hannah Hochner.
Advertisement
Subscribe for our daily newsletter