While the artificial limb was printed in San Francisco, Autodesk’s Israel R&D center played a major role in its creation. 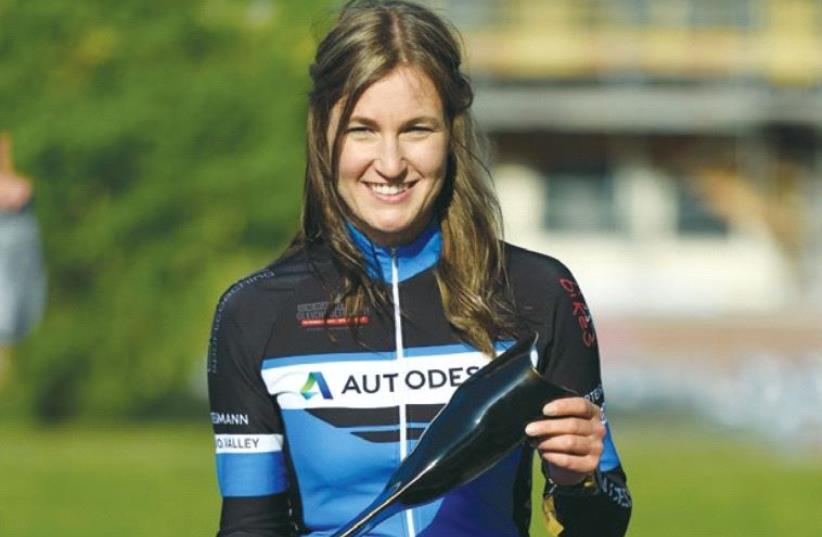 GERMAN CYCLIST Denise Schindler shows off her new prosthesis, produced through 3D printing.
(photo credit: AUTODESK)
Advertisement
When German cyclist Denise Schindler competes in the Paralympics later this month, she will be showcasing technological innovation as well as her sporting prowess.The 30-year-old will be competing with a new prosthesis, one that was produced through 3D printing. Schindler has been working with Autodesk, a San Francisco-based software company, for about 18 months to design the new high-performance prosthesis.While the artificial limb was printed in San Francisco, Autodesk’s Israel R&D center played a major role in its creation.“This is an excellent example to the way in which technology and innovative tools change the way in which we make things,” said Eitan Tzarfati, the head of Autodesk’s Israel R&D center in Tel Aviv. “In using generative design powered by algorithms we are at the beginning of a revolution in design and manufacturing. Human designers cooperate with powerful computers and advanced software in dealing with design limits.”The Paralympic Games will take place in Rio de Janeiro between September 7 and 18 at the same venues and facilities as last month’s Olympic Games and under the same organizing committee.The games will include 4,350 athletes from 178 countries, who will compete in 23 disciplines. Israel will be represented by 33 athletes in 11 disciplines.Schindler is a Paralympic silver medalist from four years ago and had the honor of explaining the 3D prosthesis to US President Barack Obama and German Chancellor Angela Merkel at Hannover Messe in April, one the world’s largest manufacturing trade shows.“On the one hand, they encouraged me to go to Rio and [wished me] good luck there,” said Schindler. “But on the other hand, for sure they encouraged us to keep on the good work and establish a new way and to change the future there.”Schindler, whose right leg was amputated below the knee following a tram accident when she was three years old, worked with Autodesk to develop a prosthesis that would be lighter, more aerodynamic and allow for greater power output.Her team in Germany coordinated with a project manager in London and engineers in San Francisco and Portland, Oregon, using Fusion 360, a cloud-based design software that allowed them to try more than 50 iterations of the design before printing the first prosthesis.While a traditional prosthesis would weigh more than 1.5 kilograms, producing a polycarbonate prosthesis this way gets that under 1 kg. It can also take production time from about 10 weeks to five days and costs from about £12,000 to about £3,500.“It’s a door opener, we call it,” Schindler said. “The first step, that we did, building a high-performance prosthesis, but if we establish a way to make it easier to build a prosthesis with 3D printing, it can open up the opportunity for other prostheses.”

TNS contributed to this report.
Advertisement
Subscribe for our daily newsletter