The 'Post' takes a look at five of the startup city's collaborative, shared office spaces popular with innovators and entrepreneurs. 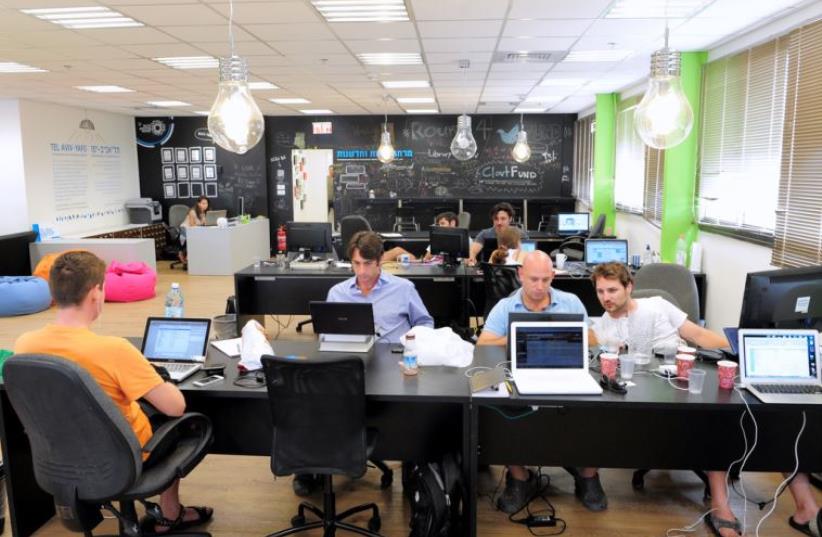 Co-working facilities at the "Library" in Tel Aviv
(photo credit: TEL-AVIV YAFFO MUNICIPALITY)
Advertisement
While Israel has solidified its identity as the “start-up nation,” the country’s hi-tech capital of Tel Aviv continues to see innovators and entrepreneurs sprouting, but where do they all work?
Co-working facilities at the "Library" in Tel Aviv (photo credit: TEL-AVIV YAFFO MUNICIPALITY)
The Samurai House in Israel (photo credit: PR)
The new Urban Place co-working space (photo credit: Courtesy)
MindSpace (photo credit: Courtesy)
Co-working facilities at the "Library" in Tel Aviv (photo credit: TEL-AVIV YAFFO MUNICIPALITY)
Apart from industrial parks and long-term lease properties, Tel Aviv’s renowned start-up ecosystem is dotted by the ever-growing trend of co-working spaces, which serve as the boutique answer to tech-age office complexes.Amid the scattered stainless steel skyscrapers and the omnipresent low-rise Bauhaus structures that make up the coastal Mediterranean city’s urban skyline, these spaces operate largely on the principles of collaboration.Ambiance and energy are also factors in these collective business hubs that incorporate features of Tel Aviv’s popular cafe culture with top tier infrastructural amenities.Tel Aviv is home to some 50 co-working spaces and their more structured cousins – accelerators.After seeing the number of these innovation centers jump from 21 in 2012 to more than double in 2015, the municipality said it foresees the phenomenon continuing to grow.“It’s very suitable for the Tel Aviv ecosystem because here 97% of the start-ups fail – which means 97% of them are start-ups and entrepreneurs that had an idea, decided to go for it, decided to establish a start-up, and at some point decided it wasn’t going to make it and it winded down,” Tel Aviv Municipality spokeswoman Mira Marcus told The Jerusalem Post.“For many of those entering the co-working space, it provides an opportunity before they raise enough funds to actually invest in their idea instead of investing in rent.”As their name indicates, co-working spaces act as tech hub microcosms that house a multitude of “stations” each inhabited by an array of small companies, start-ups, freelancers and business-minded individuals.For enterprises with relatively few employees, or start-ups that are still in early phase development and funding, these co-working spaces provide a dynamic and economic alternative to traditional office leases and cubicles.Often times the facilities also offer community programs, workshops and mentorship from partners.While each co-working complex is unique, they generally house a combination of open areas, private cloisters, conference rooms, administrative resources and communal eating facilities.The Post reviewed five co-working spaces in central Tel Aviv during the Open Start-Up program under the framework of the city’s 2015 DLD Innovation Festival last week.MindSpaceIn June 2015, MindSpace opened its second location in Tel Aviv at Ahad Ha’am 54 to accompany its Rothschild branch. The sleek interior combines elements of industrial design with glass station partitioning along with warm-tone and wood decor for a cozy yet contemporary vibe. Nearly 75% of its some 250 members are start-ups, the rest include small companies, private contractors, service providers and foreigners. MindSpace offers flexible subscription plans that provide 24/7 access to their facilities. The popular complex thrives on the prospects of diversity, creativity and community.Samurai House in Israel Aiming to link the start-up ecosystems of Japan and Israel, the Samurai House in Israel opened in July 2014 and seeks to serve as a start-up embassy. The Japanese venture capital firm Samurai Incubate bypassed Silicon Valley to establish its first international presence in Tel Aviv at 52 Nachlat Binyamin St.The Samurai House says its co-working space is modeled after a traditional embassy. It acts as an accelerator and provides work space for the 16 Israeli start-ups invested in by Samurai Incubate. The intimate two-story space operates to promote “Japanese startup culture, values and goodwill” and has already hosted some 60 events this year.Urban Place This brand new co-working space opened in September 2015 and can hold up to 90 people.The stark, modern complex designed by Arik Ben Simhon and Rebecca Serror takes up the entire 9th floor of the Psagot Tower highrise at 3 Rothschild Blvd. The layout is divided into two sides – one aimed at foreign or Israeli entities that want a presence in Tel Aviv, and another geared toward young, innovative companies. Urban Place also provides administrative services to its members. It offers work stations that can accommodate up to six people.Urban Place seeks to maintain its balance of Israeli and foreign members and once a month focuses on one of its start-up members to assist with business plans and funding opportunities.The Library The Library, a municipally-run co-working space, opened in 2011 and is catered to early-stage start-ups. Located in the Shalom Tower at 9 Achad Ha’am, the Library hosts four rounds of entrepreneurs a year for three months at a time, with an option to extend another three months maximum. For a relatively cheap NIS 300 per person per month, the Library is aimed at companies dealing with urban and smart city issues, but is also open to various start-ups engaged in sectors ranging from marketing to cyber security. The complex is structured in an open-floor design and also has a conference room and salon area.Mazeh 9-Young Adults Center (The Social Lab) This four-story structure shelters another municipally-funded and operated co-working space for social start-ups. Founded in 2011, the establishment is geared toward young innovators in the era of ever-increasing living expenses.Among its facilities for creative youth and housing center, it contains an open space, conference room and working hubs for social entrepreneurs. The lab also provides young innovators with professional guidance and support from experienced mentors.