More than 150 developers from 17 countries gather to improve infrastructure of Wikipedia platform. 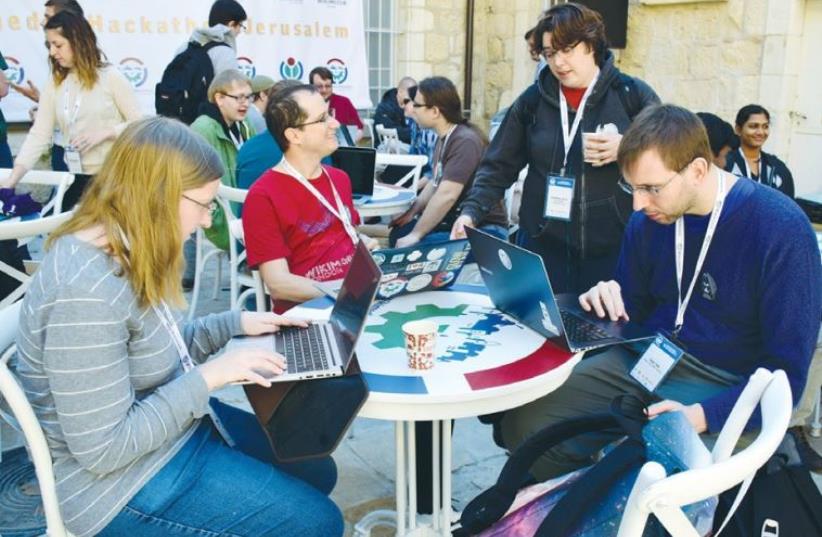 SOFTWARE DEVELOPERS from Israel and abroad work to improve the Wikipedia online encyclopedia at Hansen House in Jerusalem over the weekend
(photo credit: ARIEL ELINSON)
Advertisement
The Start-Up Nation earned yet another colorful feather in its already well-ornamented cap on Sunday, after hosting the annual Wikimedia Foundation’s Hackathon in Jerusalem.The four-day event, which brought together more than 150 computer developers from 17 countries to enhance Wikipedia’s user experience and ensure reliable data, concluded at the capital’s Hansen House, a former leper hospital converted into a bustling hub for artists.There, at least 40 programmers from around the globe presented proposals to improve the highly popular online encyclopedia frequented by millions of users every day.Quim Gil, an engineering community manager for the Wikimedia Foundation, emceed the forum’s final event, where programmers presented solutions to improve the technological infrastructure of Wikipedia, particularly the MediaWiki platform on which it is based, and the Wikimedia code development.“We celebrate this event every year,” said Gil in a cavernous third-floor Jerusalem Stone-lined room in the historic former hospital, located in the Talbiyeh neighborhood, near the Jerusalem Theater.“It’s our biggest technical event of the Wikimedia movement, which is held in a different city every year.”According to Gil, Wikimedia chose Jerusalem after deeming the Wikimedia Israel chapter to be the best candidate for prospective host cities around the world.“The Wikimedia movement has different chapters and organizations, so we opened a call for different participants, and in this case we felt that Wikimedia Israel was what we felt was the most appropriate candidate for this year,” he said.The Wikimedia Foundation, Gil explained, is the organization in charge of hosting Wikipedia, as well as the foundation’s numerous other ancillary projects.“Our mission is to bring free knowledge for all the world, for everybody, for free,” he said. “And this is a gathering of developers working to improve Wikipedia system projects, and developer tools that allow us to create, promote and distribute content in a better way.”As a case in point, Gil cited one solution presented at the forum developed to assist users with poor vision.“One of the projects we demonstrated here is a gadget that will allow people with impaired vision to be able to read pages with increased font and with higher contrast than regular Wikipedia,” he said.Another development featured an editing app for Android, which allows users to make edits and add citations from their smart phones.“Using a tiny mobile interface to review a huge document will allow people to select a word or sentence and then be given an option just to edit that one sentence,” he said. “For us this is critical, because Wikipedia wouldn’t be what it is if readers didn’t become editors at some point.”Indeed, Gil emphasized that ensuring that users are capable of adding and correcting content in real time, from any mobile device, is instrumental to the nonprofit company’s ongoing success.“Users are welcome to use Wikipedia, but if a percentage of those users see a typo or a missing date, them being able to fix it is what makes Wikipedia what it is,” he said.Asked about the dangers of users who post false or libelous content on the platform, Gil responded that another project developed at the conference addressed that issue by applying artificial intelligence to prevent such abuses.And despite the event’s steep competition, Gil noted that a prize is not presented to the most industrious developer.“We had 40 projects demonstrated that didn’t exist three days ago,” he said. “We are not really into number ones’, we are a community of collaboration and longtime relationships. This is how we work.”Yuri Astrakhan, a senior software engineer for Wikimedia Foundation, who was born and Russia and has lived in New York for 25 years, said he presented a solution for storing more data on Wikipedia.“I worked on a way to store structured data so that when you make an interactive graph or chart or a map, you can store the data in a structured way and reuse it for multiple articles,” he said.Aaron Halfaker, a senior research scientist for the foundation, said the major attraction for participants is the concept of “open knowledge.”“This is a lot of people who are really interested in the idea of open knowledge, and the way that they can contribute to it most effectively,” he said.Gil said next year’s Wikimedia Foundation’s Hackathon will be hosted in Austria.