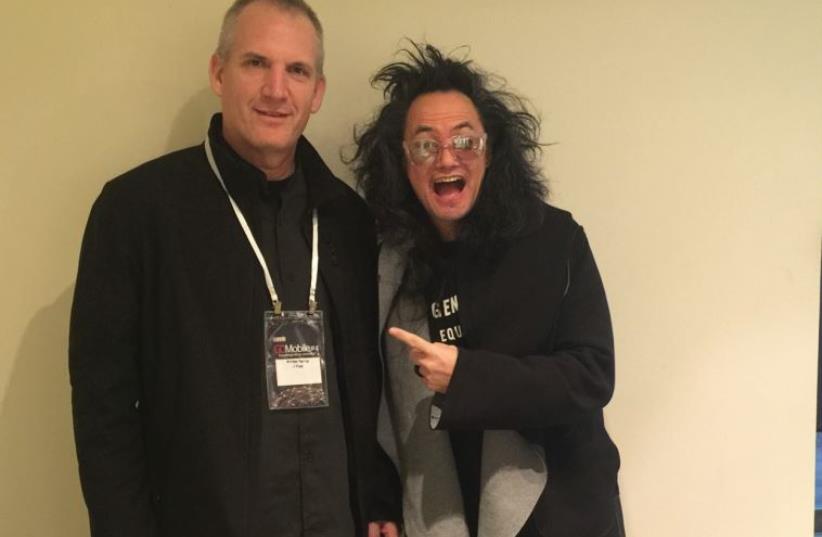 ‘TECH TALK’ writer Ariel Shapira (left) meets with AOL’s resident prophet David Shing
(photo credit: Courtesy)
Advertisement
GO MOBILEWhether you’re a CEO, R&D manager, or MARCOM exec, to remain updated on the upcoming challenges in the world of mobile business, you probably found yourself at the 4th annual GO MOBILE conference, which took place on January 27 at the Avenue Conference Center in Tel Aviv. The hot topic at this year’s conference was the Internet of Things (IoT).Among the companies that sent representatives to this year’s conference were: eBay, Amazon, Google, CAL, Intel, Flex, Microsoft, Moblin, Sisense, E.soof, Eastronics, SEO, Aricent, realcommerce, Emind, LG, SessMe, Red Hat, ZIGIT, iApps Technologies, Shenkar, HealthWatch, and Wearable Valley. In addition, the Israeli chief economist and the director of Foreign Trade at the Israel Ministry of Economy were also seen in attendance.AOL’s Digital Prophet I recently met with David Shing, AOL’s resident prophet (or head of marketing as his business card reads). To say he is a very energetic and enthusiastic person would a complete understatement. He loves to talk about innovations in advertising and technology, how the IoT has become the Internet of everything, and how everything is measurable. This has all been made possible, Shing explained, because computers have become so small and almost everyone uses their smartphones to get things done these days. The challenge technology companies are currently facing is to make it easier for people to forge a connection with these innovative technologies. The only way new, sophisticated technologies will be accepted and used by the masses is if they accept simplicity, he concluded.Geek PicNic to Jerusalem The first annual International Geek PicNic will take place during the intermediate days of Passover (April 24-28) at Jerusalem’s Sacher Park. The open-air festival will include attractions and gadgets that will excite the imagination of every tech enthusiast. Geek PicNic will celebrate robotics, science, science fiction, space, 3d printing, VR, revolutionary scientific research and out-of-this-world art. The festival is meant to be a fun outing for adults and children alike, and tents and attractions will be set up throughout the park, so that everyone can enjoy seeing the latest innovative gadgets and astounding tech breakthroughs. It’s no surprise then that the motto for this inspirational event is: Geek is chic! Zcash overtakes Bitcoin Founded by Eli Ben Sasson (Technion) and Eran Tromer (Tel Aviv University), Zcash (short for zerocash) recently launched its first public alpha release of a new digital currency that will be a perfect untraceable alternative to Bitcoin.Bitcoin’s original function was to prevent people from forging money transfers by broadcasting digitally signed messages to the network, which are recorded into a public database known as the block chain. Zcash retains the ability to thwart forgeries, and the block chain remains decentralized, yet, unlike Bitcoin, with Zcash no one else can double spend, track your financial transactions or see who transferred or received payments.Thanks to Zcash’s zero-knowledge feature, everyone will now be able to keep all their Zcash transactions secret.“Bitcoin is not an anonymous currency,” said Ben Sasson. “If I make a payment to someone, anyone can go online and with a few clicks see how much I sent him, and I can then track what he then does with the funds I just gave him. Obviously, large companies can learn a tremendous amount about their customers and competitors by following their Bitcoin payments. This serves as a serious barrier for the expansion of Bitcoin.”To illustrate this problem, Ben Sasson gave the example of an employer who wants to pay his workers’ salaries with Bitcoin. “Just imagine – in one day, a boss decides to pay all his employees from his Bitcoin account. One minute later, every single employee at the firm can go online, type in your Bitcoin address and see exactly how much you paid each employee from your digital wallet. And from that moment on, the employees can track every single transaction their colleagues make down the road. This lack of privacy is a catastrophic problem that requires a serious solution.”Ben Sasson went on to explain that Zcash also solves Bitcoin’s problem of fungibility. “When people say, ‘money has no smell’, they are referring to something positive – that people have no idea what a specific dollar bill was used to buy in the past,” he said.“This is an essential feature of a properly functioning economy. It’s important for all of us to know that the dollar bill sitting in our wallet does not run the risk of being deemed unacceptable due to any prior controversial transaction that is was involved in. And yet, in the case of Bitcoin, each coin retains a history of where it was used, and in that way it becomes ‘tainted’, making it useless for business transactions. The alternative Zcash is offering eliminates this problem and turns the electronic coin into a currency that is more like real cash, just decentralized.”

If you run a young startup, have developed an interesting app or have a question, please feel free to contact info@social-wisdom.com.Translated by Hannah Hochner.