British hi-tech in the Holy Land. 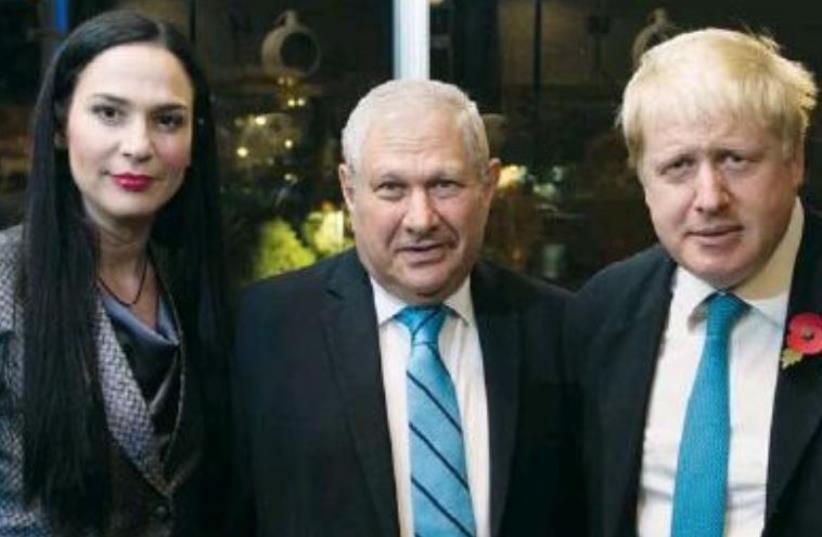 Yifat Oron, David Brodet and Boris Johnson
(photo credit: BEN KALMAR)
Advertisement
British hi-tech in the Holy Land British Ambassador to Israel David Quarrey, hosted a festive cocktail party held at Riverside in honor of London Mayor Boris Johnson, who was in Israel for a visit on Monday and Tuesday. In his speech, Johnson thanked Tel Aviv Mayor Ron Huldai and Ambassador Quarrey for their warm hospitality, and also thanked Yifat Oron, the CEO of LeumiTech, for opening offices in London and supporting the collaboration between British and Israeli hi-tech companies in the capital. “We are here to celebrate the most fantastic partnership between London and Israel. It’s growing the whole time, and I’ve brought a wonderful delegation with me. This partnership is between the two most innovative societies on earth.”Happy birthday, H. Stern! A 70th-anniversary celebration was held Sunday night in honor of the international jewelry brand, H. Stern, at Aria in Tel Aviv. Celebrities and socialites were given a sneak preview of the new collection, GENESIS, whose design was inspired by stars. The guests drank cocktails, snacked on gourmet appetizers made by chef Guy Gamzo and mingled with the evening’s presenter: supermodel Bar Refaeli, who took up the position of the DJ just as she did in the global advertising campaign video. H. Stern incoming CEO Sharon Rosenberg hosted International Marketing Manager Alix de Vignes, who arrived in Israel especially for this event. During the evening, he also met outgoing president Israel Kurt and Yigal Ahuvi.New Cameri premiere The Cameri Theater held a premiere screening of the show, Lost Honor, which tells the story of a young Muslim lawyer in New York who works for a Jewish law firm and is married to a white Jewish woman. Through the character’s personal story and his complex relationships with his family, friends and coworkers, viewers catch a glimpse of what it was like to live in New York just after the Twin Towers fell. Among the guests at the screening were Leora Ofer, Yair Seroussi, Eli Yones, Chaim Topol, Shai Piron, Ehud Barak, Nili Priel and Cameri CEO Noam Semel.Color Run comes to IsraelOver 3,500 young men and women ran in the Israel Color Run on Friday in Hayarkon Park in Tel Aviv, in support of NATAL. This is third time this run is being held in Israel in an effort to raise awareness of post trauma resulting from terrorist attacks and wars. Participating in the run were: NATAL chairwoman and co-founder Judith Yovel-Recanati; CEO Orly Gal; owner and CEO of Altshuler-Shaham, Gilad Altshuler; and Head of Research Chen Altshuler, who have been supporting NATAL for many years and sponsored the Color Run.

IDC goes technical The Interdisciplinary Center Herzliya held an alumni event last week at the Tel Aviv Hilton Hotel that was moderated by Dr. Adi Koll, the director of alumni affairs. Prof. Uriel Reichman, president and founder of IDC, welcomed the guests. Google Israel CEO Meir Brand and Facebook Israel CEO Adi Soffer-Teeni both shared their thoughts with guests about innovation and technology, and the challenges that lay before the technology giants they lead.