Wedding at the Kotel, Israeli Friends of the University of Haifa and more. 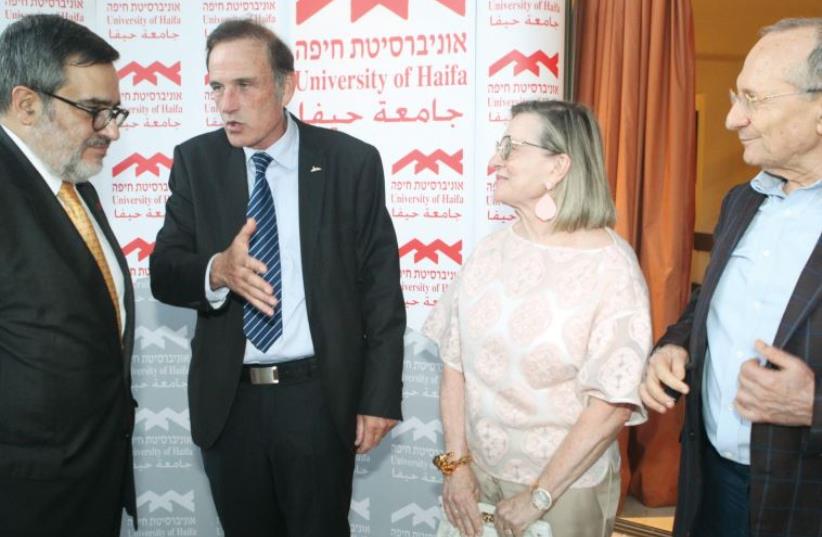 Israeli Friends of the University of Haifa annual gala event
(photo credit: GIL HADANI)
Advertisement
1. Wedding at the Kotel
In the plaza adjacent to the Kotel, Knesset Speaker Yuli Edelstein recently married Irina Nevzlin, chair of the board of firectors of Beit Hatfutsot. Last week, the couple held a large-scale pre-wed- ding party at Ronit Farm, which is locat- ed in the Sharon Region. This is the second marriage for both of them (he is a widower and she a divorcee). Guests from the business sector who attended the wedding were Ofra Strauss, Ruti and Meir Sheetrit, Chemi and Gila Peres, Gad and Eti Propper, Shlomo and Lea Nass, Eitan Ben Eliahu, Rami and Adina Levy, and of course the father of the bride, billionaire Leonid Nevzlin. The newly married couple requested that guests make donations to one of three charities in lieu of presents.

5. Haim Shiff Prize
The Haim Shiff Prize for Figurative-Re- alist Art, awarded for the ninth year at the Tel Aviv Museum of Art, was present- ed this year to Druze artist Fatma Shanan Dery. The evening began with a cocktail reception in the museum’s sculpture gar - den. The prize is awarded each year by Shiff’s son, businessman Dubi Shiff and his wife, Dr. Anna Domarev. Attending the event were Director and Chief Cura- tor of the museum, Suzanne Landau; chief of restoration and curator of 16th- to 19th-century art, Dr. Doron Luria and his wife Aya Luria, who is director and chief curator at the Herzliya Museum of Contemporary Art; Supreme Court Jus- tice Yoram Danziger and his son, artist Yoni Danziger.Translated by Hannah Hochner.
Advertisement
Subscribe for our daily newsletter