“Until recently, nobody [in Israel] understood how fashion and technology connected.”

By MAX SCHINDLER
SEPTEMBER 6, 2017 02:26
Nooar, an Israeli start-up lingerie firm, allows women to place their bra on a tablet or computer screen in order to customize the fit.
(photo credit: COURTESY NOOAR)
Advertisement
Despite the country’s nickname as the Start-Up Nation and its reputation as a hi-tech powerhouse, founders of apparel start-ups say Israeli fashion retailers lag far behind their international peers when it comes to integrating technology into retail.Speaking at the first “FashTech” or fashion-technology gathering in Tel Aviv on Tuesday, apparel CEOs described the pitfalls that stop Israeli clothing firms from fully embracing hi-tech.“The entire e-commerce shopping experience is less fun in Israel. You don’t enjoy browsing so much. They take the fun out of it,” said Yaffit Salmanson, founder of Nooar, a hi-tech lingerie start-up.“Currently, if you shop online in Israel, you have to go all the way to the post office,” Salmanson said, adding how security customs can sometimes hold up international shipments for months. “From a consumer’s standpoint, it makes it very frustrating.”E-commerce websites allow a customer to peruse the online aisles and click “buy.” But Israel lacks reliable shipping for getting a shirt or dress to the customer’s home, so consumers often choose not to take advantage of online shopping.In comparison, American consumers enjoy two-day shipping on most commercial goods and same-day delivery for customers living in major cities, offering a more seamless shopping experience and more responsive customer service.When it comes to the 10 largest Israeli fashion retailers – stores such as Castro, Fox, Hangman and TNT – few if any of the firms have installed inventory software in the store or incorporated real-time analytics into the shopping experience. 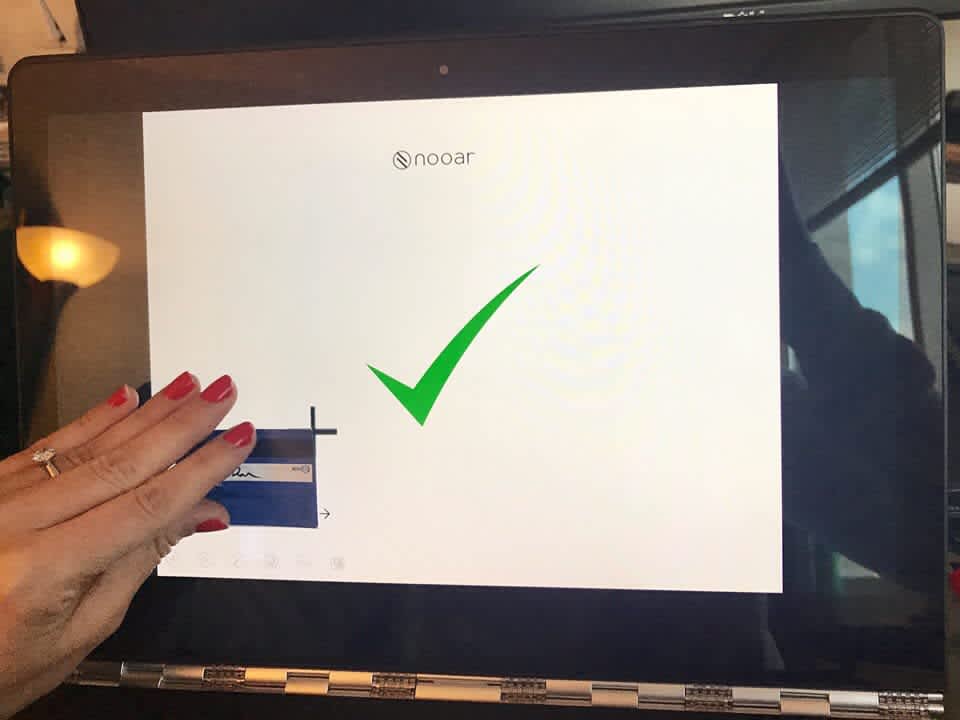 Nooar, an Israeli start-up lingerie firm, allows women to place their bra on a tablet or computer screen in order to customize the fit. (Courtesy Nooar)Some of these firms may be afraid to invest in data analysis because those tasks are hard to quantify, a stark contrast with Excel spreadsheet-obsessed American retailers.“Until recently, nobody [in Israel] understood how fashion and technology connected,” said Yael Kochman, CEO and founder of Fash&Tech. “We’re still far beyond what’s happening in the US and in China.”When Kochman started Fash&Tech in Tel Aviv in 2013 – a platform that connects multinational fashion retailers with Israeli hi-tech start-ups – virtually no fashion companies in Israel collaborated with start-ups and hi-tech firms. Today, big Israeli fashion retailers still lag with their in-store technology and most lack mobile-friendly sites.For example, most American firms tag their clothes to see how long an item has been on the shelf, how many times it has been tried on, and how often it is purchased. US clothing retailers also tabulate how many people come into the store, monitoring data that is missing from Israeli retailers.While much of the retail technology is being developed in Israeli research-and-development centers, it is only adopted by Israeli retailers years after it has been first used in America and Europe.And because Israeli retailers don’t buy shopping data from analytics firms, they may miss trends and not know how to advertise their inventory in the right way.Rather than personalize advertising and send discount coupons at opportune moments, like is done in the United States, Kochman said, many Israeli retailers spam the costumer and blast them with emails all time of the day and night. Israeli companies also lack basic e-commerce features such as auto-complete, which pulls the customer’s billing and shipping address from history and saves them from typing out the information yet again.For Salmanson, the majority of Israeli consumers tend to not mind sharing their personal information such as tracking location, a willingness that differs from American customers.With her lingerie company, Nooar, Salmanson is able to sell bras and underwear online without a brick-and-mortar outlet.Customers tend to return, on average, more than 35% of purchased lingerie. So Salmanson tailored the company’s approach; in order to order a $100 new custom bra, a customer places an already-owned bra on a tablet or computer screen to measure the cup contours and band size.Previously, American companies asked that women would take a selfie-pic of themselves to measure the lingerie. But customers resisted, because they didn’t want half-naked selfies of themselves online.Because of shipping difficulties, Salmanson will only be able to offer her lingerie services to American customers.And the same logistical challenges are forcing some Israeli fashion start-ups to move their headquarters to America or Europe to be closer to risk-taking clients.“Basically, from a product perspective, for us specifically, it’s much more interesting to work with retailers abroad because they are much more open to innovation,” said David Bleicher, CEO of Invertex, an Israeli e-commerce footwear company which does almost all its business abroad.Part of the issue is scale. Where the American ecosystem is much larger, the Israeli market is more niche.“If you look at Israel, everything is tight, the margins are small – everyone is fighting for their lives. It’s much harder in this type of atmosphere to be open to innovation and take risks,” Bleicher added, which may sound like the opposite of Israel’s competitive start-up culture.Yet Bleicher sounded optimistic that Israel would eventually catch up to the American and European shopping experience.“I’m very sure that shopping malls and e-commerce here will soon look very different... there’ll [sic] be an Amazon or a replica of Amazon, someone will break down the code of doing e-commerce very well in Israel,” Bleicher said. “Maybe it’ll be the Azrieli Group.”